It's a Beautiful Day in the Neighborhood!

I woke up to 47 degrees outside. Ahhh bliss. I got out my winter clothes box. Rediscovering all those winter items was like Christmas. I couldn't decide which chunky sweater to wear today!

Lolly had a soccer game at 9am. Jaguar woke me up at 6. I moseyed around all morning in my jammies while my dress dried, did some cleaning, then started a delicious breakfast which I intended to bring through to Scott for breakfast in bed... when I realized that the game STARTED at 9, not that I had to LEAVE at 9! It was 8.20, and I was still completely not ready. I frantically woke Scott up, had him get Lolly ready for soccer while I had to haphazardly choose the first sweater in the box - no time to lovingly look through them all - and pull my hair up in a messy ponytail. No make-up. I scraped my delicious spicy scrambled eggs and two sausages into a Tupperware bowl, filled Lolly's water bottle, and we bolted out the door.

So my quickly put-together outfit today consists of The Dress as a skirt with a burgundy jumper over it, yellow tights and my furry boots.


After the game (which they won), Lolly and I went to a birthday party for a boy in her kindergarten class at the skating rink. In my rush this morning, I did manage to grab his present but not my camera. So I got only a couple pictures on my phone, which takes horrible photos. 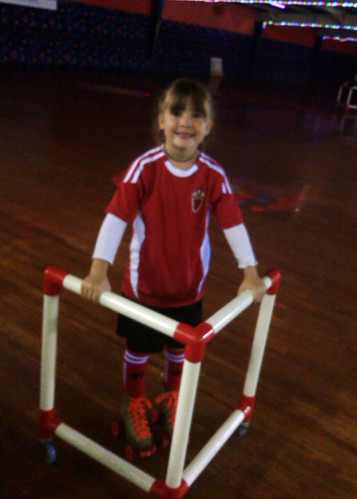 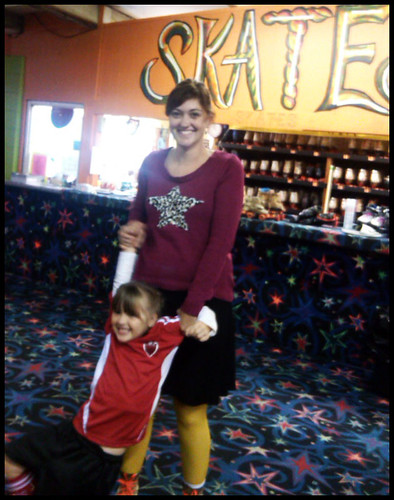 It's been a long time since I've put on a pair of skates - two decades perhaps? - but Lolly asked me to skate with her. I clumsily guided her around the rink a couple of times until she tripped me up and I fell on my knee and called it a day. I'm too old and I value my life too much for skating. Lolly had fun though. She was the only girl who showed up.

She's not wearing her dress today, opting to stay in her soccer gear.

Fifi is wearing her dress, but barely. Is wearing your dress tucked into your jeans and covered completely by a sweatshirt cheating?


It's still gorgeously cool outside, in the 60s, so I'm now heading outside to watch the kids play and soak up the beautiful Autumn weather. I love October!