Hate and Fear and Death and Anger

With all the hate and fear and death and anger in the world right now, I am finding it hard to breathe lightly. Deep in my gut I feel sickened and exhausted and helpless. The American political climate is volatile, at its eruption point. Fear is being shoveled down our throats, and animosity is poisoning our veins. People are being shot by police, and police are being shot in return. Racism is killing black people, and white people are fighting over who's fault that is. Transgender people are being harassed over bathrooms. Whole religions are taking the blame for the acts of a belligerent few. Personal freedoms of who to love or who to worship are being yanked from some to assuage others. From Baltimore to San Bernardino to Baton Rouge to Falcon Heights to Nice to Munich to Orlando to Dallas, people are being murdered on the regular, sometimes en masse and each time unprovoked.

I believe in optimism. I believe in goodness, and I believe in love. But the hurricane of hate and fear and death and anger twisting all around me is suffocating.  How can I possibly see an American future where racism is obliterated from the bottom to the top, and from the top to the bottom, when half the country still refuses to see it exists? How can I believe that love will conquer hate when hate has become so palatable and carefree that it is openly preached from podiums and pulpits? How can I teach my children to be the change they want to see in the world when the world doesn't want to be changed or even see a need for it?

I recognize that I am a middle-class, married-to-a-man white woman. I cannot pretend to understand the daily concerns and experiences of black people, Muslims, gay and transgender people, undocumented immigrants, asylum seekers or police officers. As an atheist and a woman, I can relate to certain levels of the discrimination but nothing comparable to those who are being threatened with banishment and deportation, who wake up wondering if they will be attacked in a bathroom today, who say "I love you" every time they leave the house in case it is the last time. I cannot relate to that enough to insist "I know what it's like". I don't.

I may not personally experience the hate and fear and anger and death meted upon so many of my fellow mothers and fathers and brothers and sisters, but I see it. Not all of it, but I catch glimpses and glimmers. And they knock the breath out of me. Too often I am a silent observer. I am an observer who does not want to be silent but does not have the words or the platform to say anything or make a difference. I open my mouth to speak, but my own personal fear, my own survival instincts, catch the words in my throat and choke them out. My guilt and ignorance hold my frustration with the world's injustice against me, accusing me of being a part of the problem, and I am rendered silent again. Then I'm reminded that silence is a privilege, and I am hurled back into frustration.

This weekend I finished reading two books I've been working on for months. Bad Feminist by Roxane Gay is a wonderful book, mixing humor and critical thought into multiple essays surrounding topics of oppression and inequality for women, for people of color, for people who are not thin, for anyone who does not fit the perfect standards American society holds us to. While I was able to laugh during some chapters, I had to pause and remember to breathe during others. I had to look square in the eye many truths about my perceptions as a white woman that I had not realized needed challenging. I was reminded that the inequality I face as a woman can be frustrating but not as frustrating as the challenges for women who heap inequality upon inequality. Inequality is not binary. The more disadvantages bestowed upon a person for his or her gender or gender identity, sexual orientation, race, religion, hometown, education level - the list goes on - the more discrimination a person is bound to suffer. Sexism isn't experienced by me the same way it is experienced by a black woman or a lesbian woman or a black lesbian woman. The book opened my eyes to the sexism experienced by all types of women, not just women who look like me. I too am a bad feminist.

I also finished Between the World and Me by Ta-Nehisi Coates. I started this book back in February but only finished it today, because it was the hardest book I have ever read. Reading it was like loading concrete blocks onto my chest, one page after another. It is one thing to "know" that black parents have to teach their black sons and daughters how to behave extra good during certain encounters; it is an entirely different thing to read the intensely honest and intimate letter written by a father to his son about the struggle to preserve the black body from destruction. No other book I've read that openly or begrudgingly let me observe a black experience, not Disgruntled or God Help the Child or Why Are All the Black Kids Sitting Together in the Cafeteria, though each of those affected me in profound ways, changed me the way this one did. The hate and anger and death and fear twisting all around us are real dangers to our brothers and sisters of color. Yet we continue to tell them they are either imagining things or they need to sort themselves out by themselves, as if we as a country and a history and a society never did a thing to cause this peril to their bodies.

I am crushed under the inevitability of all the hate and anger and death and fear in our world. It feels like change is not going to come. I do not know what to do about it or how to help. I cannot change the minds of those around me who refuse to see the problems. I am such a small, insignificant fish in a fathomless ocean.

I want all this hate and death and anger and fear to stop. I know I cannot stop it. I know I cannot escape it. I cannot simply turn off the radio, shut down Facebook, walk away from conversations, and slip under my covers just to make myself more comfortable again. If my fellow mothers and fathers and brothers and sisters do not get the luxury of switching off the TV to find comfort, I will not exercise my ability to do so. I will never fully understand what it feels like to be the target of all this hate and fear and death and anger, but I will continue to face these every day with them. I will continue to immerse myself as much as I can into their worlds through books and relationships and news stories and causes. I will listen when I ought to listen and try to speak when I ought to speak. I will push myself to continue believing in goodness and love, for my children and for my world, however small my influence on it may be. I cannot, I must not let the hate and fear and death and anger win. 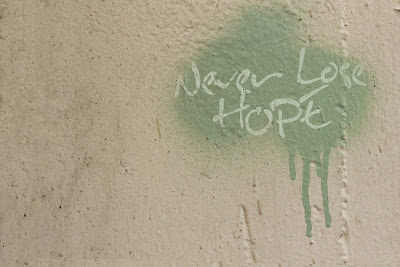