I had good intentions of going to the gym this morning for one of my favorite classes - Cardio Dance Party - but I made the mistake of putting Gilmore Girls on Netflix for an episode, and ended up staying home all day in my pajamas. I justified my GG marathon though with a resolution to give the house a really good deep clean, and I actually carried through with that decision. I watched half a season of Gilmore Girls, while drinking an entire pot of pumpkin spice coffee and cleaning the living room and kitchen *almost* to perfection. I ran out of time to mop the kitchen floors. But I organized DVDs and Scott's desk, cleaned up all the clutter, dusted everything, vacuumed the floors and furniture and washed dishes and laundry. It was a very productive day, despite my skipping the gym. I'd like to think my heavy-duty cleaning burned a few calories regardless. And the fact that I managed to not snack all day (if you don't count the coffee) showed tremendous restraint and will-power. I did not kill my diet until work tonight when my co-worker walked in with a pizza.  I ate one slice.

I didn't end up getting dressed until Jaguar took his nap at 2. I had to leave for work at 3.30, so I took Jaguar's naptime as a chance to get dressed, take my pictures, and pack my dinner for work (a nice, healthy salad, if you don't count the croutons). 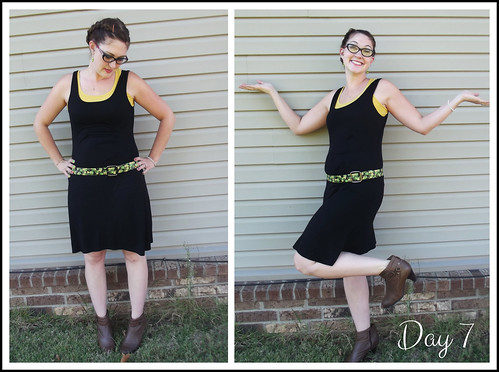 Today I wore The Dress with a mustard tank underneath, which was something I hadn't thought to try before. The Dress is made of billowy cotton and viscose material, so its begins to stretch after a few days. The arm holes were gaping quite a bit and I didn't think revealing a leopard print bra while at work would be deemed very appropriate. To coordinate with the tank, I added a camouflage-inspired green belt, green earrings, a pearl bracelet (the one I wore on my wedding day) and brown ankle boots. I have no idea where these ankle boots came from, by the way;'I discovered them when I opened my winter box. I've never worn them before and don't know how they got there. Someone must have given them to me at the end of last winter (my aunt maybe?), and since the season was ending, I guess I put them in the box and forgot all about them. At any rate, I'm super excited about them, because they fit and are really cute. And presumably they were free. They also make my ankles look skinny. Is that weird?


I tried something new with my hair too. I Dutch braided the two sides and then pinned them together at the ends. I kind of felt like a cross between a von Trapp child and Princess Leia. 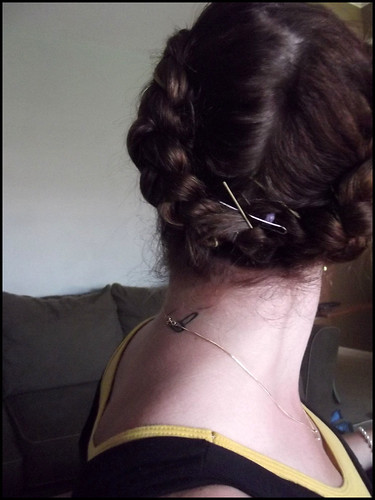 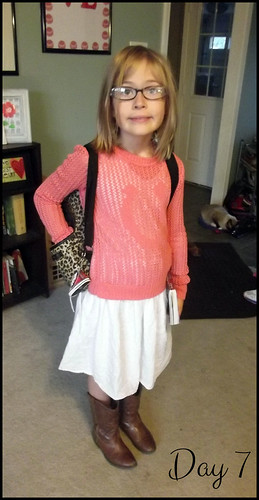 When I got home from work this evening, Scott showed me a letter that Fifi had written him. It was super cute, asking him if he'd vote for her if she ran for President and telling him he rocks and all sorts of other sweet things. The last part was "P.S. Can I stop the October Dress Project? I'm afraid Mum will be sad." Aww. Scott wrote her a letter back, and I added a P.S. myself telling her of course she can stop, and if something like this is no longer fun, she doesn't have to stick with it. So this will likely be Fifi's last dress photo. Proud of her anyway for going for it again! She made it through the whole month last year, and that in itself is pretty impressive!

Today she wore Her Dress with brown cowboy boots and a knit coral jumper with a lucky horseshoe pattern in it.

So. This morning I got an email from the Mike Ross email updates saying there were tickets available for tonight's gubernatorial debate in Little Rock. If I hadn't been scheduled to work, I'd have tried to snatch one or two up! But alas, work. Luckily, we have a TV in the lobby where I sit, so we were able to watch the debate there. I don't have much commentary on it - seeing as it would be highly boring to nearly everyone - but I had one major complaint about Mike Ross. One of the last questions was about marriage equality. Hutchinson naturally answered that he firmly believed marriage was between a man and a woman (to a huge cheer in the crowd), which of course is no surprise. Ross spoke next, and I waited excitedly, thinking he'd have a great answer, but he disappointed me beyond words. He stated he too believes marriage is between a man and a woman but he doesn't "tolerate discrimination." That was probably the most disappointing thing I've heard him say this entire campaign. So weak. So spineless. I know he's running in Arkansas and therefore must choose his words carefully, but I'd have been much happier with some kind of politician-style answer like simply "I won't tolerate discrimination of any kind." Why did he have to alienate all the LGBT voters in Arkansas by saying that? Was he trying to win the Religious Right vote there? Like that's ever going to happen! I know the topic is minor compared to all the other topics on the table, and it doesn't really matter in the first place because that decision is now in the hands of the State Supreme Court and the Federal Supreme Court. But shame on you, Mike Ross, for not having a backbone with that answer.

Over all, the debate was just exactly what political debates always are - a lot of criticizing the other guy, a lot of half-answers and a lot non-answers. I'd accuse both sides of that. Some good answers were given by both candidates too,  I suppose, but I'd be lying if I thought one guy came out "the winner".  I still cannot possibly vote for Hutchinson though considering his stance on the Medicaid Private Option and his income tax cuts for middle earners instead of low earners and his track record for voting against things that are important to me (and to the state), but I wish Ross had been a little stronger on some things and kept his mouth shut on others.

And you know what else I wish? I wish the Independent party candidates had been invited to the debate. Because one thing Ross said is very true - he IS conservative. Americans don't see it, but Democrats are very right of center in light of the rest of the world's politics; ya'll don't know what left really is! Some day I'd like to see what a REAL liberal could do for Arkansas!  Next time, KATV, or whoever organized the debate, invite ALL the candidates please? Whether an Independent would actually get voted in or not (and realistically, they would not), still give them a chance to have their voice heard.  We will always have a two-party system as long as the other parties are excluded as deliberately as this every single time.

(And now, Facebook friends, you may begin systematically unfriending me for being one of them there darn socialists. *wink*)

(FYI- Socialism and Communism are not the same thing. I just used "Communism" in the title because of its alliteration, and, oh let's admit it, click bait. Also I'm pretty sure the NSA is now reading my blog. Hi.)
Posted by Lori Arnold at 11:01 PM
Email ThisBlogThis!Share to TwitterShare to FacebookShare to Pinterest
Labels: Arkansas, marriage, October Dress Project, politics