Emergency Rooms: To Go, or Not To Go?

Today started like any other day. Except for the whole going-to-the-ER part. 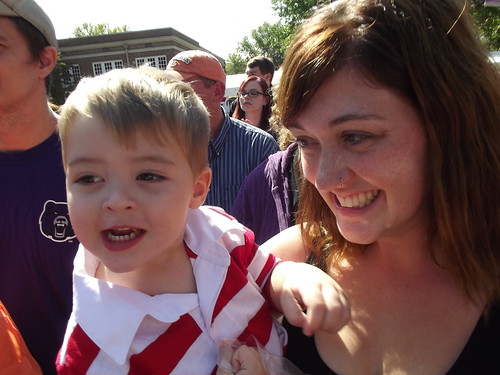 I won't get into all the gruesome (or shall I say "poo-some"?) details, but let's just say I was more than mildly concerned over the ratio of poop to blood in my two year old's diaper this morning. I know. Gross.

My plan for today had been to drive to Conway, about 45 minutes away, to attend a Democrat campaign rally in which Former President of the United States Bill Clinton was going to be speaking, among other Arkansas politicians, including Mike Ross who is running for Governor. But all that was changed when after changing an alarming diaper, I called my doctor's office for advice, and their advice was Emergency Room.

I've been to my share of emergency rooms. Having three kids has made sure of that. And I'm well aware of the magic that happens when one steps into an emergency room; you can be bleeding out your ears before you walk through those doors, but before you even finish signing your name on the form, you will be right as rain again. And as you sit in that waiting room for what feels like a good quarter of your life, you will spend the entire time thinking, "I'm perfectly fine now. I don't need to be here. Why did I come here? I'm perfectly fine now!" It's no different with children. They can show symptoms of extreme fatigue, high fevers, listlessness, pain, and uncontrollable crying, but they will be totally healed once you walk through those doors, making you look like an overreacting, irrational parent.

At least that's almost always been my (admittedly very fortunate) experience. Today was no different.

Well, except for one teeny tiny "insignificant" difference.

This ER visit was going to cost me.

Under the National Health Service in the UK, ER visits (called the A&E - Accident & Emergency) are free. "Free" of course meaning paid for by taxes, but for all intents and purposes, the visit to you on each occasion is free. I have taken sick kids to A&E, I've taken second-degree burns to A&E, I took an almost completely amputated four-year-old's fingertip to A&E. Each experience came with its own worries, tears and anxieties - and sometimes regrets when upon arrival, that darn magic occurred and we were healed before ever seeing a doctor. One concern that never popped up, however, was how the hell are we going to pay for this?

By the time I arrived at the ER this morning, I was pretty sure my son was fine. I was a little embarrassed for even coming. I kept justifying my visit with the doctor's orders to go, my own Google MDing, and the ever important peace of mind that I would have by choosing safe over sorry. After all, possible (even if improbable) internal bleeding isn't one of those "wait and see" situations, right? But what was upsetting me to the point of tears was the bill that will surely arrive in the mail very shortly.

We are extremely fortunate to be insured. In America, most insurance plans are provided by employers. However, that does not mean that all working families are insured. Employers and legislation have set all kinds of rules for who must be offered an insurance plan, but if you are ineligible because you work under a certain number of hours, or if your wages are simply too meager to be able to afford those insurance plans, you are very likely uninsured. In Arkansas, we do have a government program for children called ARKids thankfully, but as I discovered when we first moved here and had no jobs for over a month, it's difficult to find a doctor's clinic that has not filled all of its ARKids slots. As for adults, there was nothing. Adults were in between that rock and hard place of choosing to either forgo care, or visit the ER - followed by insurmountable medical bills - and either paying those bills and increasing their financial burden or simply refusing to pay those bills, destroying their credit ratings even further, and for many honest, hard-working people, injuring their sense of dignity and pride. Not to mention increasing the cost to taxpayers. Until Scott got hired, we both walked on eggshells and drove extra slowly to prevent any injury to either of us, before we were covered by his company's insurance.

Last year, before we moved here, I came over to visit with just my son to attend my dad's military retirement ceremony. A few days before we were scheduled to fly back to the UK, ten month old Jaguar came down with a fever and began pulling at his red little ears. Ear infection. I didn't know what to do. I couldn't put a baby on a plane with an ear infection! Yet we were uninsured. I got a taste of what it is like for millions of Americans who do not have insurance. My dad generously gave me a blank check and told me to just pay whatever it cost. Not only did this make me feel terrible for putting this burden on him, but I was also reminded that not every family has someone to hand them a blank check in an emergency. It turned out, however, that the check was never needed because no free or drop-in clinic would see my son because he was under 18-24 months, depending on the clinic. I would have to take him to Children's Hospital, which would have cost even more.

I panicked over this. I couldn't ask my dad to pay all that. I ended up going the wait-and-see route. If he was still unwell the day before the flight, I'd go. And I'd pay for the antibiotics out of pocket too. Somehow.

Luckily, some of that ER magic must have been swirling around the drop-in clinics because a few days later, his fever lifted and the redness in his ears faded. He was acting happy again, and I took the chance and flew us back home without seeing a doctor.

But I'll never forget how scared I was as a mother with a sick baby and nowhere to turn for medical care.

It turned out today that Jaguar was perfectly fine, or so the doctor suspects. No tests were run so I am hopeful that I'll only have to pay the ER's copay when the bill comes in. It's still a chunk of change, but I'm grateful that we are fortunate enough to have insurance.

I'm also grateful that thanks to the Affordable Care Act - which is certainly not the best plan in the world, I readily admit - many other Americans now have insurance too. And I'm very grateful that Arkansas took the "private option", aka the Medicaid Expansion, which uses federal Medicaid dollars to buy private insurance for the working poor. This was already possible for some, but the expansion increased the eligibility to more families by lowering the income level. Before the expansion, people living at 138 percent of the poverty level were still too "rich" to qualify. Now a quarter-million Arkansans have insurance who previously did not.

For what it's worth, I am actually avidly against the insurance concept anyway. I am far more in favor of universal health care and believe it is a basic human right, not saved just for the wealthy or even the working, but every single human being, good, bad or somewhere in between. Private insurance is a great option for those who want it and can afford it, and yes, the US has some of the best health care in the world, but if a poor person cannot access it, what good does that do for them? Basic free health care - regardless of the dollars it costs taxpayers - should be an inalienable right sitting right up there next to "life, liberty and the pursuit of happiness". I, for one, am more than happy to pay a little more in taxes to know that my family and my neighbors and my fellow citizens will have access to health care when they or their parents or their children need it.

So, after leaving the ER, I realized I still had time to make it to the campaign rally. Now I was feeling even more motivated to go. The candidate for Governor, Mike Ross, is very much in favor of keeping the private option for Arkansas, while his opponent Asa Hutchinson, is not so keen on it, and has said he would like to "review" it and possibly repeal it. After my little ER visit, I wanted all the more to support the guy who will protect this expansion and keep people insured.

I drove to Conway and was relieved to find that parking on the university campus was easy and signs saying "Clinton Shuttle" were clearly posted. Jaguar and I somehow managed to get right up to the front left side gate, where we saw everything from up close. Jaguar enjoyed all the excitement in the air and cheered accordingly, often repeating the crowds' exclamations of "Yes!" and receiving lots of "Awws!" in response. We heard speeches from several Arkansas Congressmen, District representatives, the Mayor, State Representatives in Washington, the current Arkansas Governor Mike Beebe, Mike Ross and finally Bill Clinton. It was a lot of fun. I even got to shake Bill Clinton's hand at the end and Jaguar got a hair mussing and cuddle from the Former President of the United States. I tried to get a picture of this, but Jaguar knocked the camera out of my hands. Here's what my picture of Clinton and Jaguar ended up looking like. 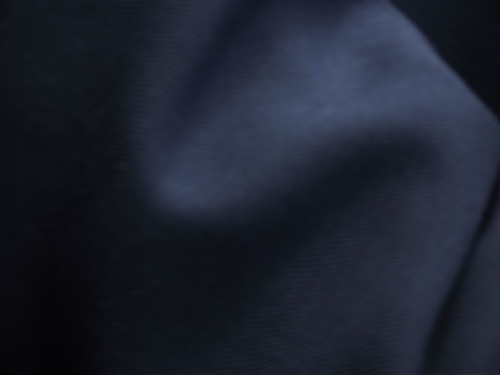 I think that was his sleeve.

I got some other good photos though, or at least not terrible ones. Being off to the side meant I was super close but at a terrible angle for photography. Plus I had a Jaguar pulling at my camera. 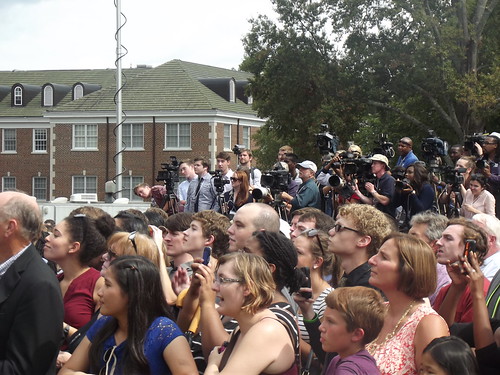 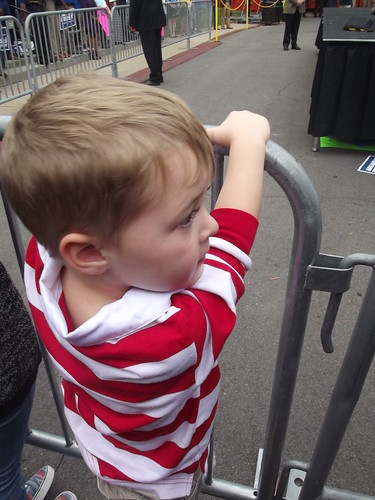 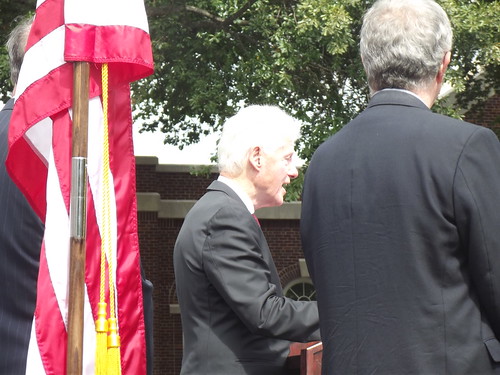 As for the October Dress Project, I was too exhausted with my overly eventful day to take good photos, so here's what I've got. 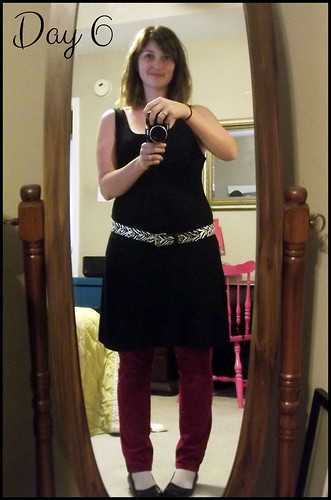 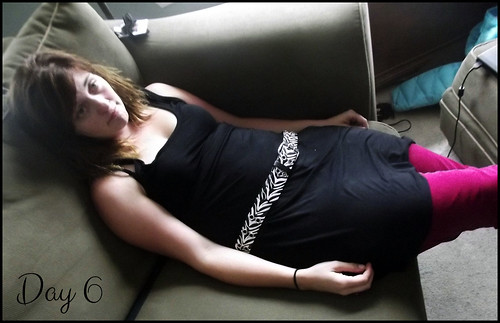 The Dress over fuschia skinny cords, black slip ons and a zebra belt.  No make-up, thanks to leaving the house this morning in a tizzy. I brushed my teeth at least.

Lolly seems to have dropped out of the ODP, which I sort of expected. She loves her dresses too much. Fifi, however, is still in the game. Yesterday she wore just a plain white t-shirt over Her Dress. Today she dressed it up with a pink owl long-sleeved button-up top and brown cowboy boots. Isn't she adorable? 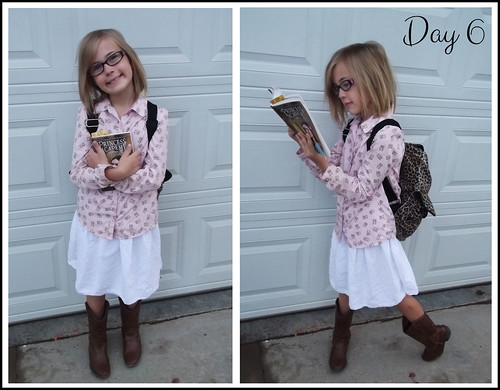