The past few days have been rather stressful, but they have all culminated in this... 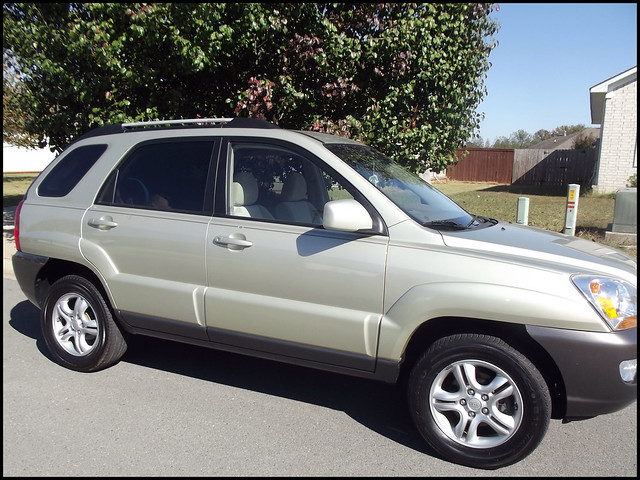 I have been waiting for over a year for this moment. We bought Scott a car first, because he needed something reliable to commute to work in. We bought his car off my mom and stepdad. Getting me a set of wheels was one of those backburner things, especially since my grandpa offered to let me drive his old van for as long as I needed. I have been so grateful for the van, but I also could not wait to finally have something of my own - something with air conditioning, preferably. And something that wouldn't break down on me every couple of months. But we simply had to wait.

Well, the wait is finally over. Today, after three days of working out the details, I finally signed on the dotted line and got the keys to my first ever dealership-purchased vehicle, a 2007 Kia Sportage. I feel like such a grown-up!


I'd like to tell you how awesome I was talking the guy down on the price, but I didn't actually manage to convince him to knock off much. I'd like to believe it wasn't for lack of trying though. So many times I felt like I was being way too ballsy, considering the price did clearly state "No Haggle Price", but in the end, he did knock a bit off and I accepted the offer. (I did the whole, "Well, I guess I'll have to keep looking elsewhere" and start to leave bit - and I really was leaving - and he then agreed to knock a little off the price. So I did good, right?) After all, the offer really was a pretty good one, and the car is in incredible condition considering it's seven years old. The mileage is ridiculously low for such an old car and the interior is spotless. I refused to allow myself to fall in love with the car so that I'd be able to walk away from it, but really, it was too good a deal to walk away from in the end. Now I've let my guard down, and I've fallen in love with it, and I'm just so excited about my new baby! I've named her My Precious, because no one is allowed to touch her, and have already covered the seats with towels and quilts to keep them in pristine condition and kid-proof.


So after three days of looking at cars, talking to dealers and working out financing and insurance, I haven't had much energy left for blogging. I have, however, been wearing The Dress, so here's a quick run through:


This was my "dress for success" car shopping outfit. I know the stereotypes - woman by herself with a toddler shopping for cars, looks like an easy sell, right? So I wanted to at least look put-together. I wore The Dress with a blue sweater, black tights, brown boots, a brown belt and a chunky brown bead necklace. I wanted to look cool, casual and confident. I was proud of myself for not getting bullied into anything that first day. I looked at some cars, but didn't let the guy tell me what I was going to do. I told him I'd get back to him later and left without agreeing to any of the car salesman tricks he was trying. But so as not to seem too uninterested, I had my stepdad, who knows a good bit about cars, go that evening and look at the car I was interested in. And lucky for me, he also found the car that would in a couple of days become MINE.


Tuesday, unfortunately, I wasn't able to look as cool and collected as I had on Monday. My dad, who is a mechanic, offered to come look at the new car I was considering on his way out of town with my stepmom for their anniversary. I had just finished up at the gym when I talked to him, so I had no choice but to go to the dealership in my gym clothes. So a bit of a fail there, but it was worth it to get my dad's stamp of approval on my car of interest.

That afternoon, after spending all day on the phone, I quickly got dressed for work. I put on The Dress over cropped leggings, and topped it with my new Nerds Gone Wild t-shirt I found at Goodwill. I put on some sneakers and wore my hair in a side ponytail with a stretchy headband.


Then fifteen minutes before I needed to leave for work, my two year old had a poop-explosion and got poop ALL OVER MY DRESS. So I had to throw him in a bath and change my outfit at the same time. I was disappointed to not wear my dress, but I decided to do a sort-of throwback thing by wearing my ODP dress from LAST year instead.


Today I wanted to bring back that whole "I'm in control" look (however flimsy it may have actually been), so I wore The Dress with tall brown boots, a green corduroy blazer (only because I couldn't find my gold velour one) and that chunky beaded necklace again. I pulled my hair back into a tidy bun. Yes, The Dress had been washed overnight.


Feeling very happy and excited today.  Already thinking of all the ways I'm going to pimp my ride... personalized plate and eyelashes for the headlights?
Posted by Lori Arnold at 10:19 PM
Email ThisBlogThis!Share to TwitterShare to FacebookShare to Pinterest
Labels: life, October Dress Project, satisfaction, updates