In the Immortal Words of Ice Cube...

Today Was a Good Day. 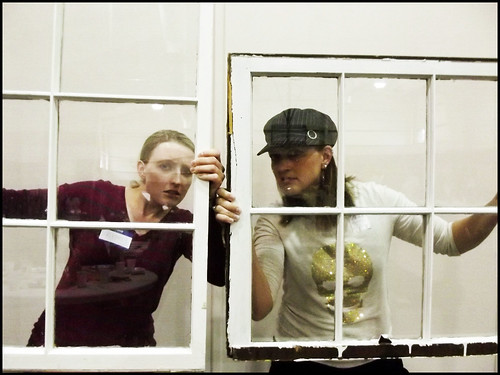 Well, except for the very beginning. Jaguar woke me up at 4am, and I spent the next two hours putting him back into his bed over and over. Eventually I had to lay in bed with him and hold him in my arms until we both finally drifted off to sleep around 6am. I know it was around 6, because just as I was finally dozing off, Lolly came into Jaguar's room to announce (loudly) that my alarm was going off. I told her to be quiet and go tell Daddy to deal with it. I then went off to sleep, and no one in the house woke up again until 7. Scott and the kids leave the house at 7.30, so we basically all overslept. Or rather, THEY overslept, I barely got any!

So the morning was rushed, getting kids fed, dressed and out the door on time, but then Jaguar and I chilled until we left the house at 9 to go to our first ever MOPS meeting. I knew very little about MOPS except that the kids go into a nursery while the mums go do... mum stuff, I guess. And I knew it was Christian-based. My new friend Victoria wanted to try it out, and I've thought about it in the past, so we decided yesterday we'd try it out today. I arrived at the church at the same time as Victoria, but we were parked in two different parking lots, so I took Jaguar inside by myself, unsure of what I was supposed to do or where we were supposed to go. I followed some girls with kids and found the nursery rooms. Jaguar took one look inside the 2-year old room and darted right past me to start playing. When I tried to say goodbye, he never even turned to look at me, just kept playing with the toy kitchen he'd found.  (When I came to pick him up, I peeked through the window, and he saw me. He pointed me out to his teacher, saying, "Mama!" but didn't run to the door or anything - he just kept playing!)

I followed a girl with no kids to the grown-up area and walked into a huge room full of unfamiliar faces. I'm not usually one to be shy or lacking in confidence, but I will admit something welled up in my chest that was akin to terror. I guess I've become so out of practice with meeting new people in large groups that I almost felt like crying, the way I used to feel in Junior High when it was nearing my turn to give a presentation to the whole class. I spoke to one of the girls with an official-looking t-shirt while I waited for my friend. Fifinally she arrived, and I was relieved. She knew a few people (it is based in her church), so she found us a table to sit at, saving me the awkwardness of having to ask a total stranger, "Is this seat taken?" (and having them say "Yes"). The project today was - get this - window decorating! Everyone had brought all kinds of amazing craft materials with which to decorate their windows - scrapbook paper, paint, stencils, chicken wire, burlap, wreaths, ribbons, wooden letters, even MOSS - and everyone had a paned window frame to work with. I've never felt so un-crafty in my life, seeing the amazing ideas all these girls had. Victoria and I, it being our first time and therefore not having reserved a window, discussed excitedly what we'd do with a window if we had one. Lucky for us, there were several spare, so we both got one! (I felt bad that we hadn't paid for one, surely we were supposed to? But no one said anything about it...) 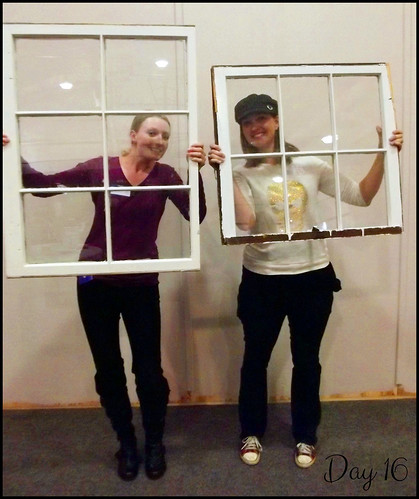 Anyway, we walked around looking at everyone's work, gathering ideas for our own windows, and having just a really good time. Another friend, Monique, was there, one of the moms from Lolly's soccer team, so I got to chat with her too. I was surprised by how much fun I had; I guess I hadn't really expected to. I think today may have been a special day; I think usually it's more a discussion time rather than a craft time, and my guess is that it'll be Christian-based discussion, but I'm really excited about trying it again next time again anyway. Even if it's fairly religious, I'm Down For Whatever. 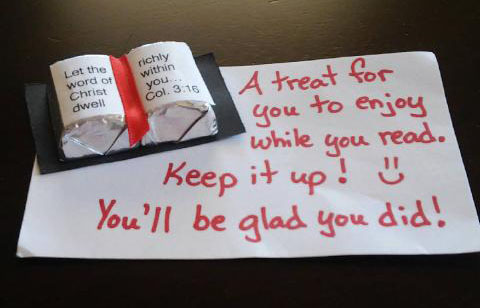 (The little treats on the tables. How freaking cute are these?!)

Before I move on, today, I wore The Dress very half-heartedly... it's that mid-month lull where I'm running out of ideas, before a new wave of ideas crashes over me. I wore The Dress tied up on the side underneath a white sweatshirt with a very cheesy gold, sparkly skull screenprinted on the front and a pair of jeans. I wore my favorite red tartan sneakers and some amber drop-shaped earrings that were, once again, a gift from Rebekkah. (I've noticed my sister-in-law has given me a lot of accessories that I love!) I felt the outfit was a little blah, though, so I threw on a black pinstriped hat too. I have a wonderful selection of hats; it's one of the perks of having been in the Brethren church all those years! I'll have to pull more out for the remainder of the month.

So after MOPS, I went to finish the grocery shopping that I never finished yesterday. Victoria told me that - get this - a local supermarket sells Pataks Indian curry sauces! I didn't believe her and had to see for myself. Sure enough, the local Harps sells Pataks! You cannot KNOW how thrilled this has made me. I have been driving thirty-five minutes into town to go to the one Kroger that sells Indian curry sauce, when they've been five minutes away all this time! I bought one or two to tide us over for a couple of weeks. (They also had naan bread!) 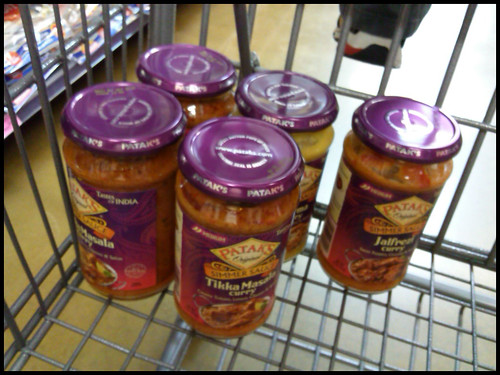 After having saved myself a trip into town, I finished my grocery shopping at the local Kroger. I got everything I needed (except frozen cauliflower, why no frozen cauliflower, Kroger?) and when I checked out, I was still under budget! I Got a $100 Dollar Bill Ya'll. Well, in the bank.

Jaguar and I came home, put away all the groceries, cleaned out the refrigerator, watched some Gilmore Girls and put some Indian curry in the Crockpot. The girls came home from school, and a couple of hours later I took them back to the school for our Parent-Teacher conferences.

*BRAGGING ALERT* If you don't want to read full-on Mummy Boasting, skip on down, because I am just going to brag here for a minute or two, because my girls totally deserve it. We got absolutely glowing reports on both girls. Lolly's teacher told us how well-behaved, smart, helpful, obedient, social, well-liked and artistic she is. She told us how Lolly is a delight to have in the classroom and never gets into trouble. I kept smiling, because I could hardly believe it! I told her how I was a little worried about her starting school, worried about her focus and her following instructions. The teacher was surprised. She said Lolly is perfect in class and such a relief, a model student. She told me she knew this conference would be an easy one, because she had no concerns whatsoever about Lolly. I left that conference beaming. I was so proud of my little hooligan. Who'd have thought that our little bohemian wild child would be so well-behaved in school?! The teacher thinks the structure has been exactly what she needed, which is what Scott had been saying to me all along. Seems he was right. So proud.

Then I went to Fifi's class. Her teacher said many of the same things, how she loves having Fifi in her class, how she's so smart, well-behaved, helpful, obedient, kind and studious. Other than the fact that Fifi talks too much (wonder who she gets that from?) and whistles while she works (that's all her dad), she had no complaints. She praised her for being such a fantastic reader and commented on how she always finishes her work early and immediately pulls out a book to pass the rest of the time. She also said Fifi was a relief to have in class. By this time I was beaming from ear to ear. Such glowing reports from both teachers. I am so incredibly proud of my little girls.

I also loved the artwork on the walls outside the classrooms. This was what Fifi had written for Grandparents' Day a couple of weeks ago. They had to write about a grandparent, and Fifi chose my dad, her "Musha". Could my kid be any cooler? 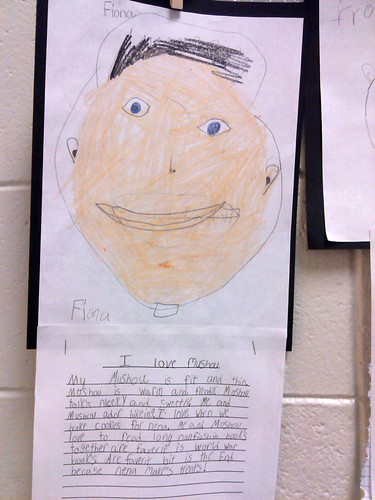 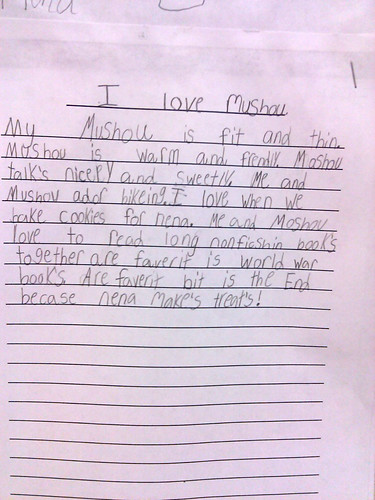 My Mushou [Musha] is fit and thin. Mushou is warm and frendly. Mushou talk's nicely and sweetly. Me and Mushou ador bikeing. I love when we bake cookies for nena [Neena]. Me and Moshou love to read long nonficshin book's together are faverit is world war book's. Are faverit bit is the end becase nena make's treat's!

And before I finish bragging, I was also really proud of myself and Scott. We don't get everything right as parents, but after those two meetings, I felt justified in thinking we've obviously done pretty well. Still grinning. *BRAGGING COMPLETE* For now.

We came home from the school and met Scott. He hadn't gotten home from work in time for the conferences, so I sent him out with Lolly to get some celebration ice cream, while I finished up the dinner. We had chicken Tikka Masala with tumeric rice and naan, and Diet Irn Bru, followed by cookie dough ice cream. We were all on cloud nine. Jaguar went to bed no problem after dinner, and I'm soon on my way to bed too. Going into work at 5am tomorrow, so I can't afford a late night!

Seriously, I had a really great day today, one of the best I've had in ages, and with the kids and Scott off work tomorrow, tomorrow's going to be great too, Fool, 'Cause It's Friday.
Posted by Lori Arnold at 9:23 PM
Email ThisBlogThis!Share to TwitterShare to FacebookShare to Pinterest
Labels: crafts, family, food, friends, life, October Dress Project, satisfaction, updates