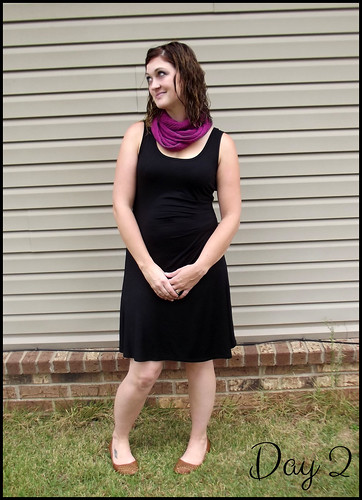 Today, I'm wearing The Dress very simply. It's just The Dress with a fuchsia knit scarf and brown flats. That's it. The Dress is so easy and classy as it is, that I wanted to show off just how sweet it is on its own. It's got a ruched waist on one side, and scoop neck in the front and back. I just love it. I also love that it shows off my tattoo in the back. 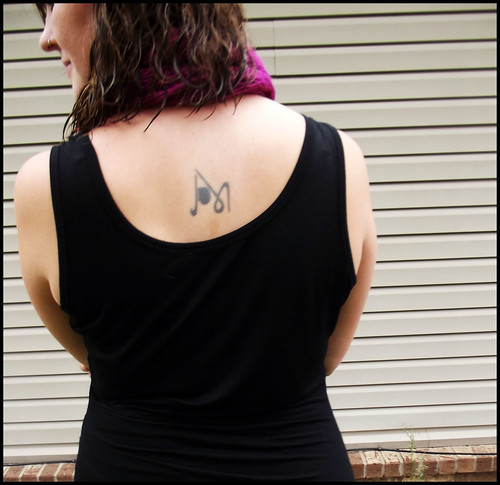 I went to Zumba this morning, so I only put this on an hour ago after my shower. Hence the wet hair. It being October, and Halloween time and everything, I wore a "costume" to the gym - my Harry Potter Gryffindor t-shirt with cape. Let me just tell you - wearing a cape to Zumba is awesome. When I got right in front of the fans, my cape flew and flapped behind me like a real superhero. I'm doing this more often... maybe even after Halloween is over! 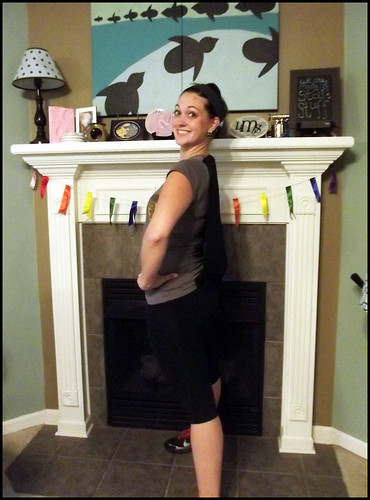 But now, I'm all dressed up and have nowhere to go. I hope Jaguar appreciates my putting on make-up for just him. Although Lolly does have soccer tonight - if it's not cancelled from the rain - so I guess that's *somewhere* to go. Regardless, this month may very well be all about dressing for ME and not for anyone else, because I'm basically never going to be seen. But I do feel nicer about myself being dressed and clean and made-up, even if it's just for my own reflection in the mirror. And for Scott when he gets home, too, I suppose. He's the only other person besides Jaguar and the girls who see me regularly outside the gym, and I *suppose* looking good for him is a nice concept (though I'll be damned if I ever admit to wearing make-up just to please a man!) 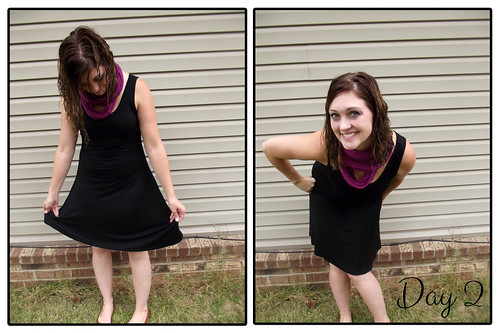 Okay so speaking of Jaguar...

We painted our toenails together yesterday! 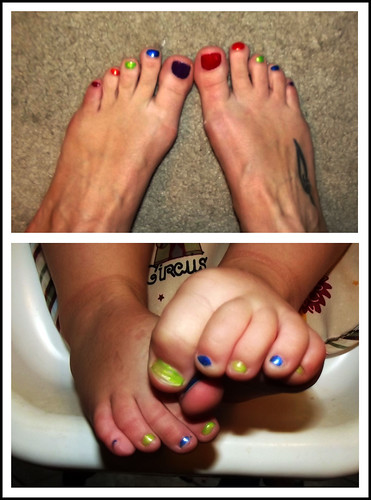 And now cue the horrified gasps. I painted a BOY's toenails!!

While I was up at the kitchen table filing and painting my nails, Jaguar crawled up in the seat next to me and stuck his feet at me. "Me!" he demanded. I was using clear base coat at that point, so I painted one toe clear. He jumped down and went to play some more. I then pulled out some colors for myself. He ran back to the table, crawled back up into the chair and stuck his feet at me. "Me!" he cried. So, of course, I acquiesced. Who could say no to that wee face?

And besides, who says nail polish is only for girls?

Well, as it turns out, a lot of people say that... Luckily I'm pretty sure no one in my little world would, not if they actually thought about it. But a lot of people would be horrified. Especially if he were an older boy.

Well, I'm just going to call BS on that. Why is painting nails, or wearing pink, or liking princesses, always considered girl-only territory? For about five months, Jaguar was obsessed with Frozen. It's the only thing he wanted to watch on TV - "Mo! Dee dee mo!" (Translation: "Snow! Deep deep snow!" from the line "Arendelle's in deep, deep, deep, deep snoooooow...") I bought him a Frozen poster for his bedroom. I even bought him a Frozen t-shirt from the girls' section in Walmart, since they don't make Frozen tees for boys. What's the big deal?

Lolly has just outgrown a blue and gray striped t-shirt with a huge pink sparkly dinosaur with a mustache printed on the front. Jaguar loves dinosaurs, so it's now a part of his wardrobe. Who cares if its pink and sparkly? It's a dinosaur, and if Jaguar could choose to be anything other than human, he'd be a dinosaur.

And if my boy sees his mummy painting her nails and wants his painted too, why would I say no? Would Scott say no to Fifi or Lolly if they wanted to help him build something with hammer and nails? Would I say no if I was doing a "gender neutral" accessorizing task, like trying on hats? Of course not. He wanted to have fun, and nail polish isn't just for girls.

I can already see gender stereotypes drifting away. I can foresee a future where my kids, no matter what they do or wear will be accepted as acceptable. I see more and more people being cool with girls who like "boy" things and boys who like "girl" things. As long as we parents foster an acceptance - and make it very plain to our kids that there's no such thing as "boy or girl" things - our kids will grow up much kinder and much more accepting of everyone else. It's natural already to kids to accept others as they are; anything goes with them. As long as we adults don't perpetuate and enforce the stereotypes on them, our kids will grow up a lot less likely to bully each other for their individuality.
Posted by Lori Arnold at 1:38 PM
Email ThisBlogThis!Share to TwitterShare to FacebookShare to Pinterest
Labels: children, kids, life, make-up, motherhood, October Dress Project, society, tattoos