I'm actually not a big fan of decking out the entire house with holiday decorations. I definitely prefer small, subtle touches. Even for Christmas, all I have is one box. I don't like clutter at the worst of times, but since moving from Scotland and streamlining everything, I've tried even harder to keep the clutter to a minimum. But three Halloween items - a plastic skull, a pumpkin Fifi made in pottery a few years ago and an orange and black cup made by my potter friend Maria - were really not enough.

I started out with the mantel. I put my new window frame up, which I haven't done anything to yet (and anyway the old, battered look totally works for Halloween) and strung cobweb over it. I added a black spider web, a hologram "old fashioned" photo (one angle, two men in sepia smiling, another angle, monster faces) and my three aforementioned items. Simple yet spooky. Makes me smile.


For my door, I wanted a Halloween, or at least a Fall, wreath, but it turns out that wreaths are ridiculously expensive. I should probably learn to make my own. So I just have a cute wooden sign.


For some time I've been wanting a little graveyard for my garden, the kind with skeleton bones coming up out of the ground. So today, the girls and I set up our spooky graveyard. I wanted the bones to look more haphazard and disheveled, but they insisted on them being orderly. I let them win.

I later found them outside, reading a book to the skeleton, whom they named Mr Demon... Apparently Mr Demon has a whole backstory and has died three times in three different ways. Fifirst, from old age, since he was 100 and "had run out of life". Second, from sunbathing in the street and getting hit by a car. Third, from amnesia. As you do. I'm not sure if I should be amused by this or disconcerted. As my friend Kate said tonight, as long as they don't start telling me that it was actually Mr Demon who told them these stories, it's probably okay... 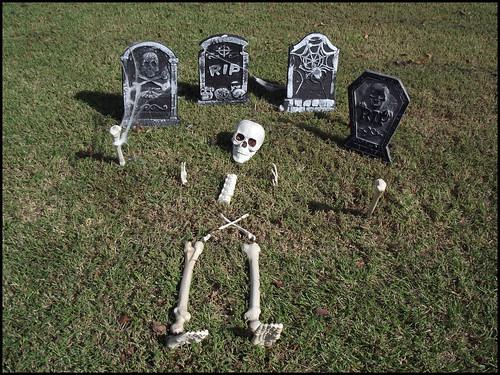 And I've gotten myself kind of Halloweeny too. I painted my nails black and orange. And today for the October Dress Project I wore The Dress (which is black) with orange shoes, necklace and bracelet. (For the interested: I picked up the shoes at a cancer research charity shop in Greenock, the necklace was a gift from one of my mom's friends and I bought the bracelet at a Craft Fair at the Old Gourock and Ashton Parish. I think it was made by either Lynda or Sylvia.) The Dress was worn as one of those asymmetrical shirts, the kind that are short in the front and long in the back. I wore a white long-sleeved shrug over it. And my hair pulled into a messy, not-fixed bun and no make-up. Scary! 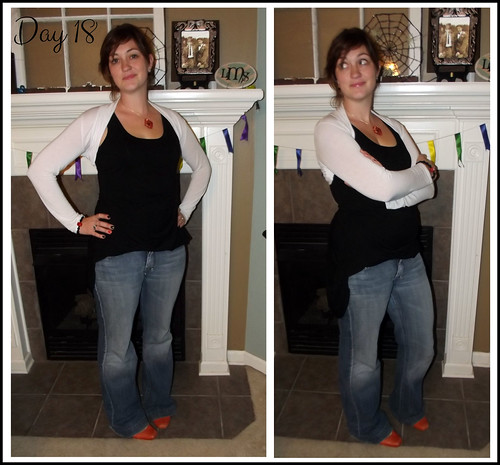 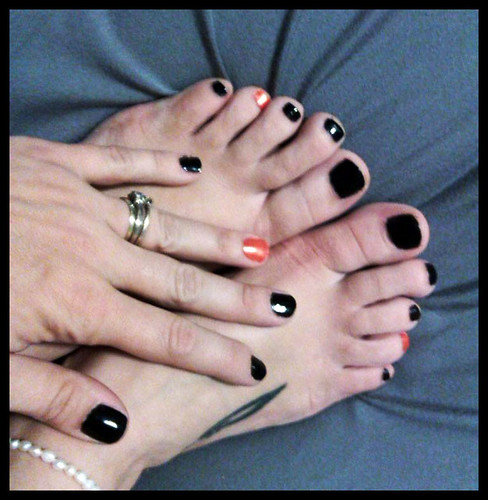 And while not Halloweeny, I went to a craft night tonight at said Kate's house, where I worked on some Christmas cards. I should have worked on Halloween cards I guess, but there you go. Kate was making Halloween - or rather, Harvest - decorations for their church Harvest Fest (cute bats and green monsters), and Lindsay was making her daughter's Halloween costume (Elsa out of many miles of tulle). So there was some Halloween fun going on there,. despite my Christmas season highjacking. Laura, the quilter of the bunch, brought a delicious pumpkin dip for us to enjoy, so all in all, it was a fairly good Halloweeny way to end a Halloweeny day.