The Dress Meets The Gym 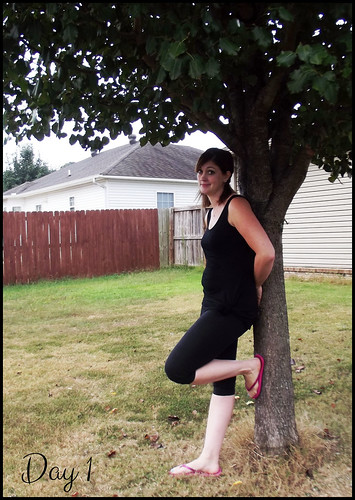 October 1st. The start of the October Dress Project. I'm so stoked!

I also apparently think that I'm getting my senior pictures made, via tripod selfie. Let's just get that embarrassing fact out there: I'm having to take my own photos of myself. It's much less embarrassing to have someone else take the photos for you. I'll be doing this in my backyard, where the neighbors can't see me posing against trees like a middle-aged fashion model in a Chadwicks catalog.

I've already explained how going to the gym and wearing the dress are going to be in direct competition with each other. Today is my first day though, and I'm so excited about this dress that I wanted to make it work. Wednesday's at the gym are Step Aerobics (which I despise but still go to often out of masochism), followed by Pilates (ahhhh, deep breathing) and then Jaguar's Busy Bees toddler class. Pilates *usually* doesn't make me sweat much, so I decided to try wearing The Dress to Pilates and conveniently skipping Step. I won't wear it to the gym often, but maybe I will on Wednesdays, giving me the excuse to skip Step for a whole month. Ahhhh. 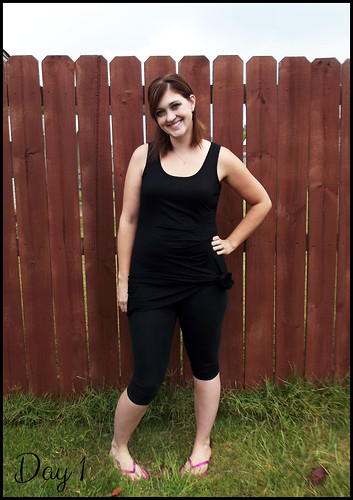 I wore my black exercise cropped leggings and tied up the side of The Dress in a little knot. Pink sparkly flip flops (because Pilates is barefoot) and a clip in my hair to easily put it up or down, depending on the exercise, easily and efficiently concluded Day 1 of ODP. Simple. Comfortable. And I did sweat far too much in Pilates today, so The Dress will likely need washed sooner than I originally planned.

(To those of you new to the project, yes, we wash the dresses. Just not everyday. We don't want to spoil them.)

So exercising in this dress was great. It's a flowy, soft cotton number and fairly thin. I got it at Marshall's for super cheap; it is a Calvin Klein dress (whoo, check me out!) marked down to $20. I want to take good care of it, because I love it and hope to wear it again after this month is over. Though experience tells me I'll probably hang it in the back of my closet first for several months before wanting to put it back on again.

In other news, I mentioned last time that I'm attempting to take the September Shopping Challenge to a new, year-long level. Today is the first day of October. Today I already failed.

It happened like it always does; I needed one thing at the store. And by need, of course, I don't mean "need" the way you "need" food and shelter, but "need" as in "my fingernails are a wreck and I really ought to start using a base coat when I paint them". That kind of need. So I took Jaguar to Walmart on my way home from the gym to buy Base Coat. And a buffing block, because, you know, nail health or all that.

I left with a double pack of Nail Strengthener and Longer Nails in Just Seven Days Promiser (or whatever it's called), a buffing block, two boxes of sugar-free instant chocolate pudding mix (because keto), a jar of tumeric (because I was craving Indian food), and two pairs of corduroy skinny jeans. BECAUSE THE CORDS WERE $5 EACH! How could I turn that down? Granted, the POINT of the shopping challenge is to not walk into a store in the first place, and certainly not to go pilfering through the sales racks, but $5! Corduroys! Skinny ones in a smaller size than I bought last time! In two different ridiculously bright colors! You will be seeing them under The Dress very soon, like tomorrow, by the way. So I ended up spending $20 on my first day of this month's challenge. Oops. Oh and to keep the wee man happy while we shopped, I bought him a Happy Meal from McDonalds, because I guess I'm one of "those" mums. He scored two toys out of it though, so that's a win.

In college, as an English major with an emphasis in Creative Writing, I never had trouble with opening paragraphs or the middle content. But conclusions were my downfall.

They are still my downfall today. I never know how to end anything I write. Today it's even worse because I'm carb-deficient. Therefore I'm just going to go eat my salad and feel good about myself for not getting a Happy Meal with Jaguar. Good bye.