Then I woke up at 3am on Sunday night with a funny feeling in my tummy... and the rest was history. I spent all day Monday either in bed sleeping or kneeling before the Porcelain Altar.

Thankfully, my wonderful husband worked from home that day to look after Jaguar for me, because I would NOT have been able to feed him or clothe him or keep him safe in the slightest possible way that day.  I was completely out of it. Oh, and Scott had to look after Lolly too, who also said she felt sick Monday morning and had to stay home from school. (She turned out to be okay, but she did sleep a fair bit.)

So I missed taking pictures of Fifi's All Red Day, and I missed wearing my Wonder Woman shirt-and-cape to Kickboxing. And I did not wear the October Dress, understandably.

Tuesday Scott had to go back to work, and I wasn't throwing up anymore, at least, but I still felt like limp pasta left lying in a cold colander. Unfortunately I couldn't even spend the day lying around feeling sorry for myself for being absolutely famished but unable to eat anything, because I had to take Jaguar into Little Rock for an appointment at the Children's Hospital. (He's fine. No worries. More about that later.) The appointment took much longer than planned, I felt nauseated yet starving the entire time, and my stupid ears kept popping. And it was raining, and I didn't know where I was going since I've never been there, so I ended up parking in the farthest parking lot away from the building. I did, at least, wear The Dress, in as comfortable a way as possible. Black leggings, black flats and a black running jacket. 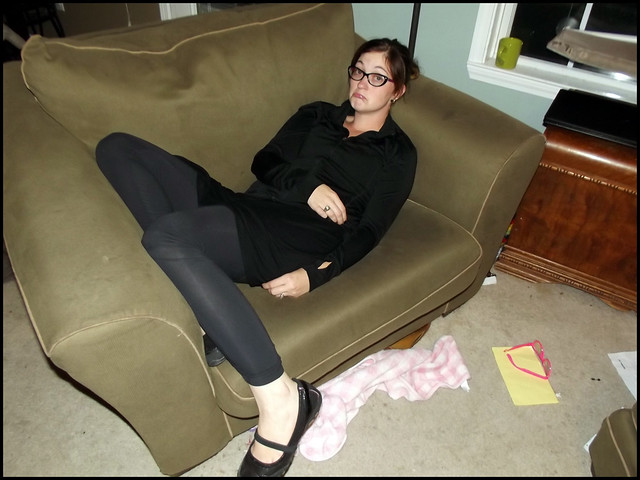 That's me lying in my favorite chair at 10pm in a messy room feeling even more sorry for myself after working my five hour shift at work.

And in my daze of a morning, I missed taking a picture of Fifi's Inside-Out outfit, but I did at least get a picture of Lolly's 50's Day outfit. (For some reason, Kindergarten had a different theme.) I made that poodle skirt, by the way, though I messed up the waist measurements. Instead of halving the dress and cutting out a circle using the radius, I halved and measured out the whole diameter, making the waist hole twice as big as I should have. Math. Sheesh. Luckily, Velcro. Then this morning, it was Fifi's turn to not feel well, so she stayed home in bed and missed Crazy Socks Day. Lolly wore my bones socks, and for some reason was really unhappy about it. (Still, Scott can always make her laugh by making fun of her grumpy face.) Today I'm feeling better, but since Fifi is home, I missed my workout again (in which *I* was going to wear the bones socks). However, I decided to still take Jaguar to his toddler class Halloween party, because I had to wear this Wonder Woman shirt at some point, and Jaguar loves his class - and his gorilla costume. (I even tried to use a fan to get my cape to fly behind me, but it turns out it's hard to take a selfie on a timer and still get the cape to flap at precisely the right moment when the camera clicks.)

(It's also hard to get a two-year-old gorilla to stand still long enough to get any good pictures even without a timer. I did my best.) And while I didn't make any Halloween bentos over last couple of days, I at least made one last week. I'll hopefully make them again tomorrow and Friday. Maybe.