Yesterday was my last day of the October Dress Project. No, don't check your calendar, you aren't confused and neither am I.  Yesterday was the 30th, but I decided that this year, I'd end a day early to allow me to wear my Halloween costume all day today. I wore The Dress as a pullover vest over a white button-up shirt (the silver dragon one) and jeans. I needed to dress comfortably and casually to chaperone Lolly's class field trip to the pumpkin patch. I had considered joining in with the kids' Western Day theme at school, but I don't actually own anything Western. Not even a pair of cowboy boots. Certainly not a hat. I thought the field trip started first thing in the morning, so I got Jaguar and myself all ready to go straight to the pumpkin patch after dropping Fifi off at school. It turned out they weren't leaving until 10, however, so I took the already dressed opportunity to go run some errands, eat some breakfast with my boy and cast my mid-term vote. Since I had Jaguar with me, I wasn't allowed to ride on the bus with the kindergarteners but had to follow behind in my car.  I thought the field trip was to the local pumpkin patch, so this was no problem. I followed the buses onto the freeway - which seemed a bit strange, but I figured, hey buses! Maybe too big for back roads? (Which makes no sense since buses take kids home on back roads.)  I followed them out of town and then out of the county... and off the Memphis exit... I began to wonder where on earth we were going and if I'd somehow managed to accidently follow the wrong school buses. I was running out of gas too. I called the school, while keeping a very close eye on the buses, to find out where we were going, in case I ran out of gas and needed to hitchhike.

We went to Motley's Pumpkin Patch, about an hour out of town. I did not run out of gas, because my new car does magic.  I got to meet all the little kids in Lolly's class that she's always talking about, and I learned that I will never, ever become a primary school teacher. Keeping track of that many five year olds was pretty much the reason I will have to dye my roots in just a few weeks. Jaguar loved playing with all the big kids, and Lolly, well, I'd like to say she loved having her mummy there, but actually, she barely noticed me. Some of the kids clung to their parent chaperones, but not Lolly. She's my little social butterfly!  She even made it pretty clear that I was totally crimping her style by trying to sit next to her at lunch time.  I couldn't have been prouder. 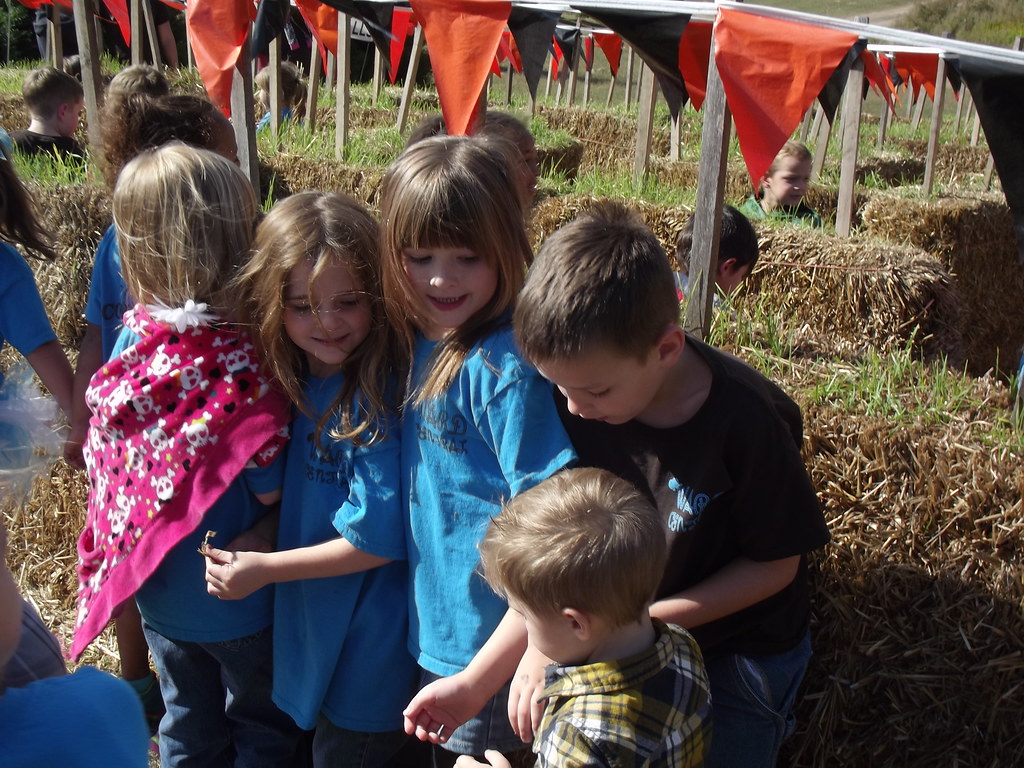 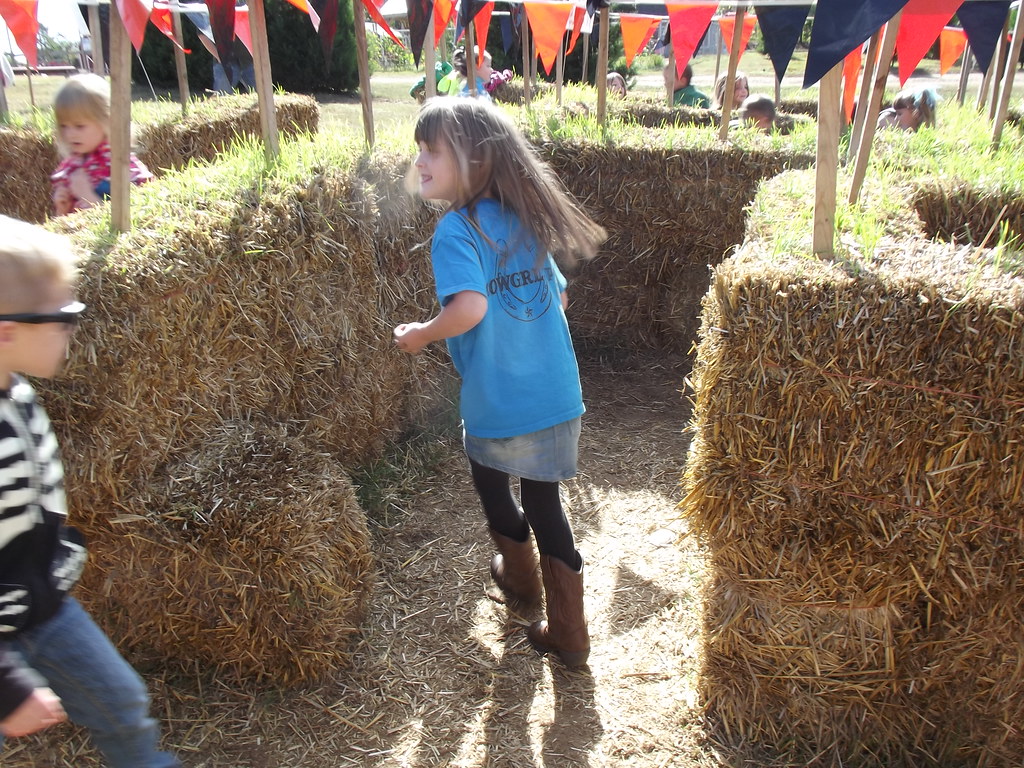 After the field trip, I drove back home to wait for Fifi to come off the school bus and take her straight back out to her first swim meet.  She was swimming in two events- 25 yard freestyle and 25 yard backstroke. She did great, and I was really proud of her. My favorite part was when the 50 yard freestyle boys were on their blocks, preparing to jump in, and they made a call for the next event participants to get ready.  Fifi, being in the next event, went to the other side of the pool where the 25 yard swimmers began, and, true to oblivious Fifi form, she failed to notice she was the only one standing there, and when the whistle blew for the boys, she jumped in too and started swimming towards them!  I jumped out of the bleachers and ran to the pool shouting for her to get out.  She looked up, trying to understand what was going on, and then it clicked. She swam back to me as the boy was almost on top of her - and unaware of her - and I grabbed her arm, pulling her out just as the boy kicked the end of the pool and pushed back to finish his race. It was hilarious! But don't mention it to Fifi, she was pretty embarrassed, poor wee thing. And this blog will remind her of that moment forever and ever. 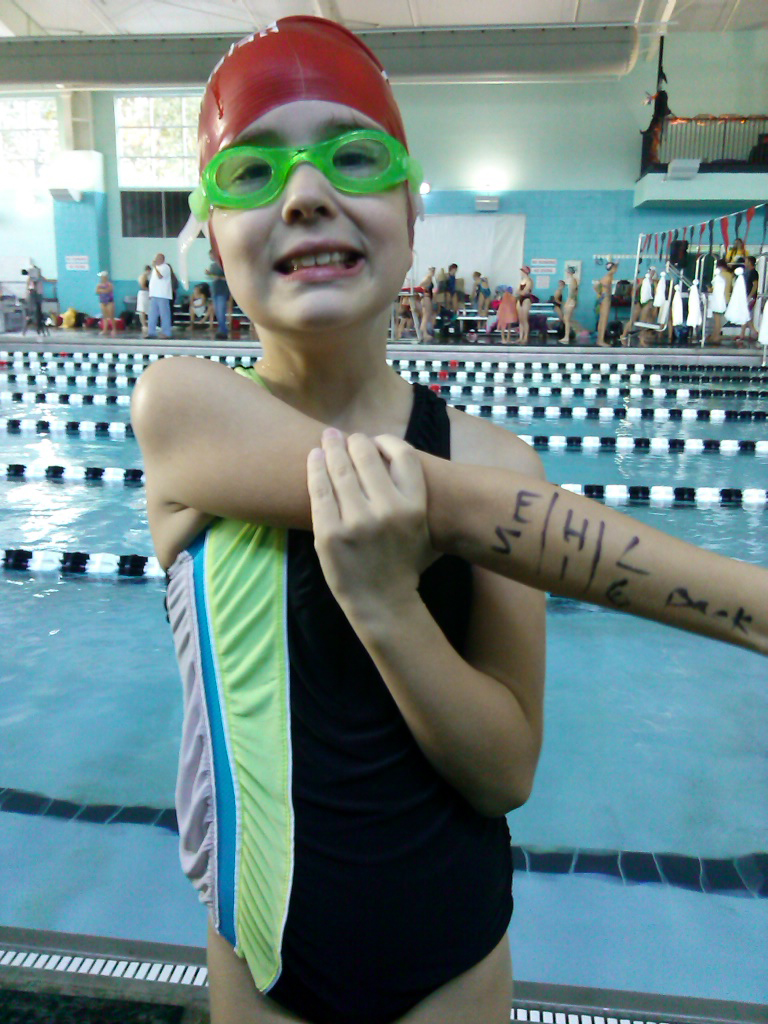 After the swim meet, we raced - ha - home to make dinner before Trunk or Treat at one of the local churches.  I chopped and fried a gazillion vegetables for the world's fastest cream of red pepper soup ever, leaving an ungodly mess behind me, and practically shoved it down all our throats, wanting to make it to the Trunk or Treat on time.  Which, to me, meant 7 or 7.30.  Unfortunately, for the church organizing the event, that would have meant 6 because it ended at 7.30. By the time I'd realized my mistake, it was 7.  Without even dressing Jaguar in a costume, Scott and I chucked the kids in the car and sped off to the event.  We got there in enough time for the kids to collect a decent amount of candy and play some games before the good times rolled up and turned out the lights.  The girls were upset they never got to do everything, but by this time, I was so tired and so cranky that I didn't give a flying flip what they were upset about. 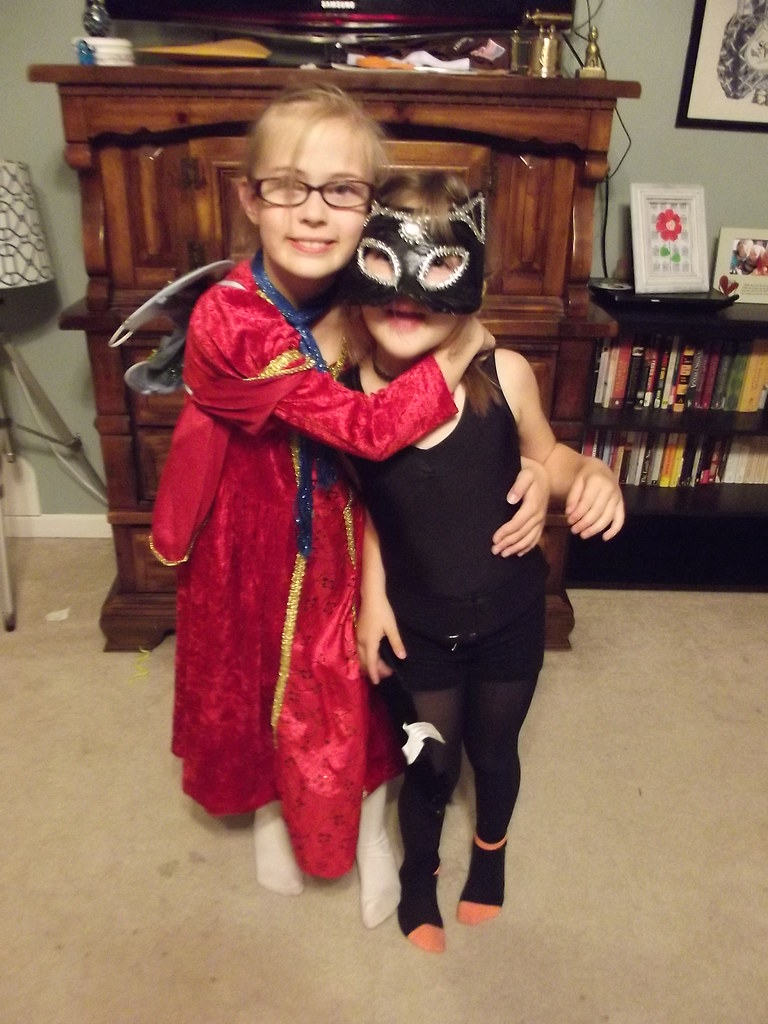 And that was yesterday.

Today started at 4am when my alarm reminded me that I was working the 5am shift at the community center. I actually really enjoy the 5am shift, but after my exhausting yesterday, it was a bit much.  I wore my Where's Waldo? - or to be more exact, Where's Wenda? costume.  I love working at that time, because it's quiet and fairly empty at the community center at that time of morning.  Only the pre-work crowd go that early and a few senior citizens.  And all those senior citizens thought I was dressed up for Christmas like a candy cane. Where's Waldo? must've been after their time, or maybe my costume was just really bad.  The rest of the staff arrived at 8am and my boss even let me take a wee bit of time off to go to the Cardio Dance Party class that I usually attend on Fridays, meaning I didn't actually miss EVERY costume workout this week.  I didn't last long though... dancing in a denim mini-skirt and brown flats isn't very comfortable nor is it very safe. I left the class early to preserve both my health and dignity and went back to work. 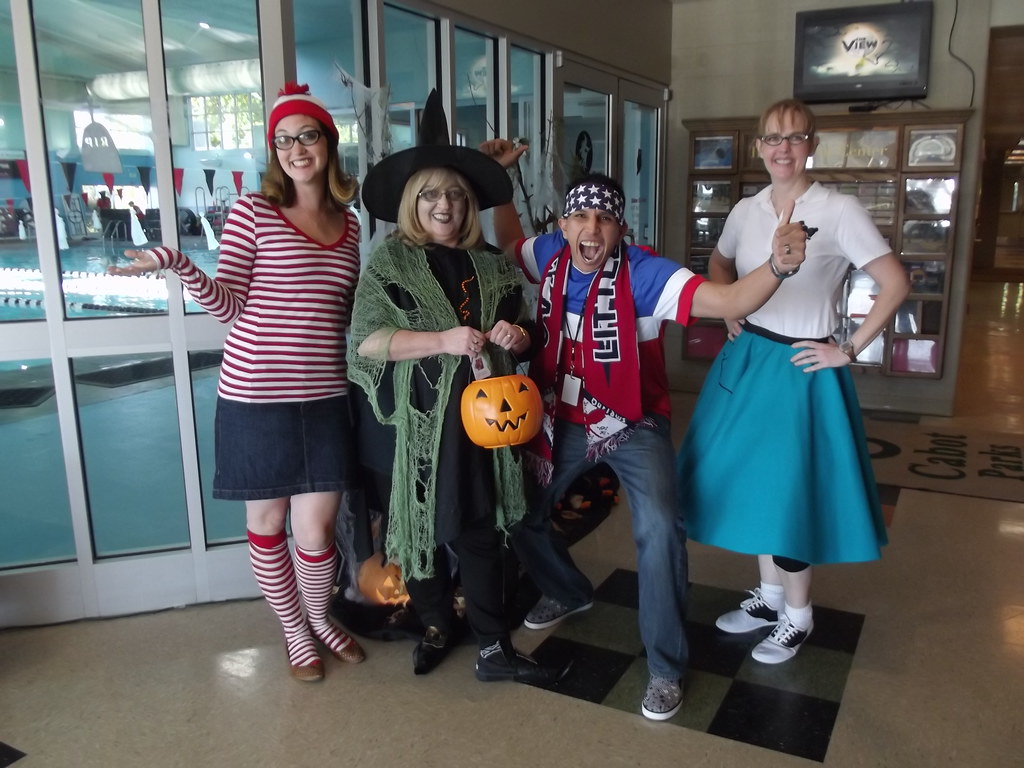 After work, I picked up my son from the "babysitters" (our friends to be mentioned later), and we grabbed 50 cent corndogs from Sonic on our way to pick up some things at Sam's Club and attend the carnival at the assisted living building my mom works at. Jaguar was a very loveable gorilla. We only stayed for 30 minutes though, because I had to be back home in time for kids coming off the school bus. Busy busy. 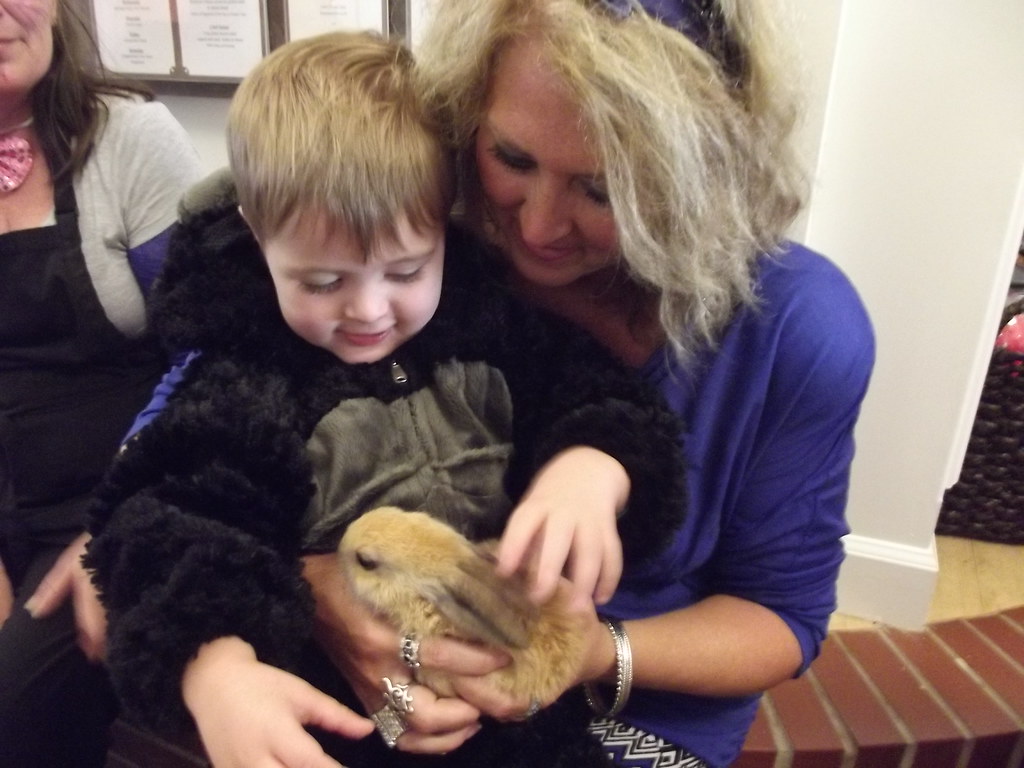 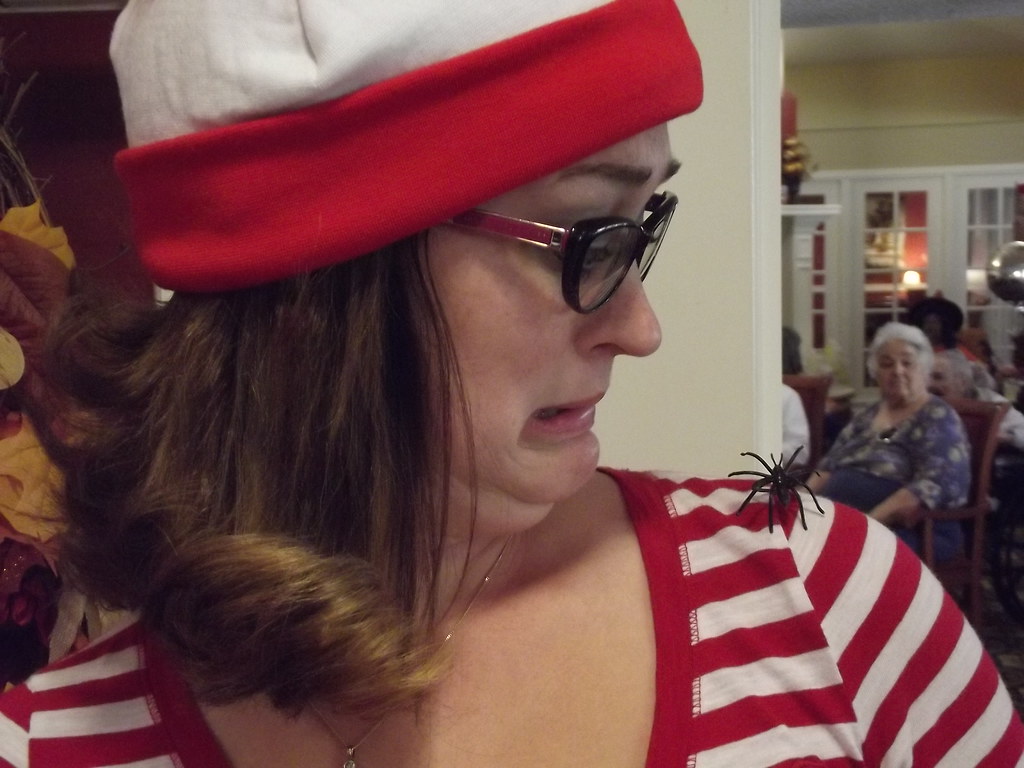 And when they got off the school bus, I instructed them to all be super quiet and let me take a nap or I really would be a scary Halloween sight in just a couple of hours.

Our friend Mike and Alice brought their two cherubs over for trick or treating around our neighborhood.  Little Mikey was a skunk and Grace was a bat (which I only figured out after looking at these pictures later).  Fifi was a dead ballerina again, and Lolly put together an amazing Powerpuff Girl costume all by herself. I just added the makeup.  Scott was the banana to Jaguar's gorilla, and I continued to wander around wondering Where's Wenda's sanity? 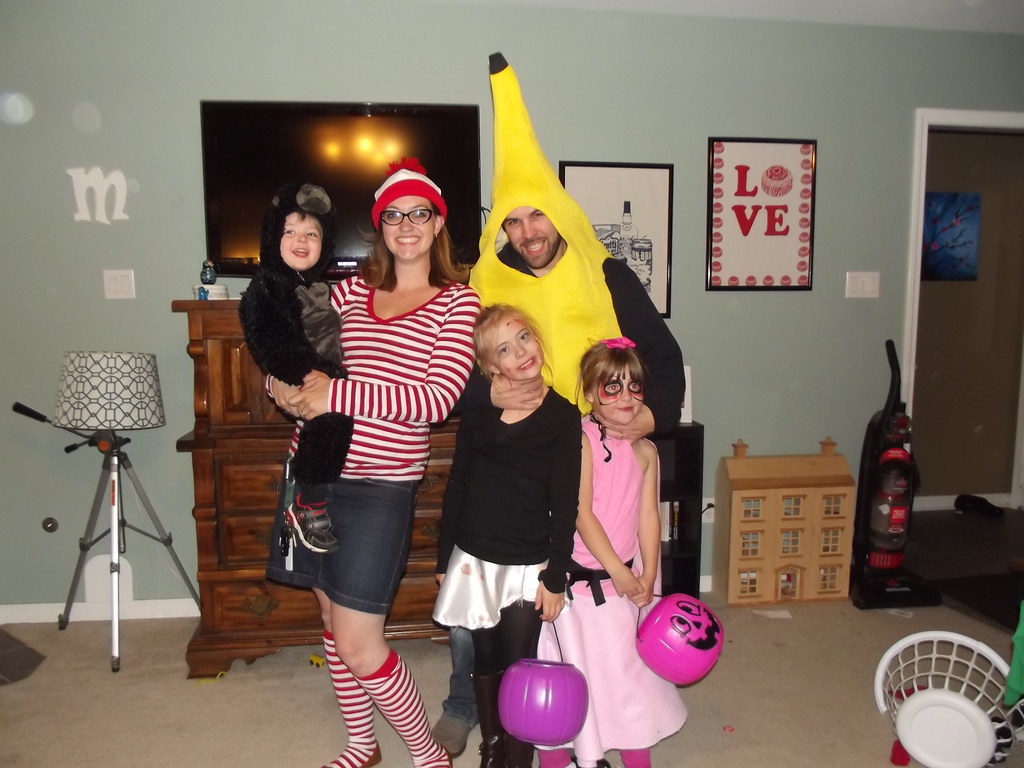 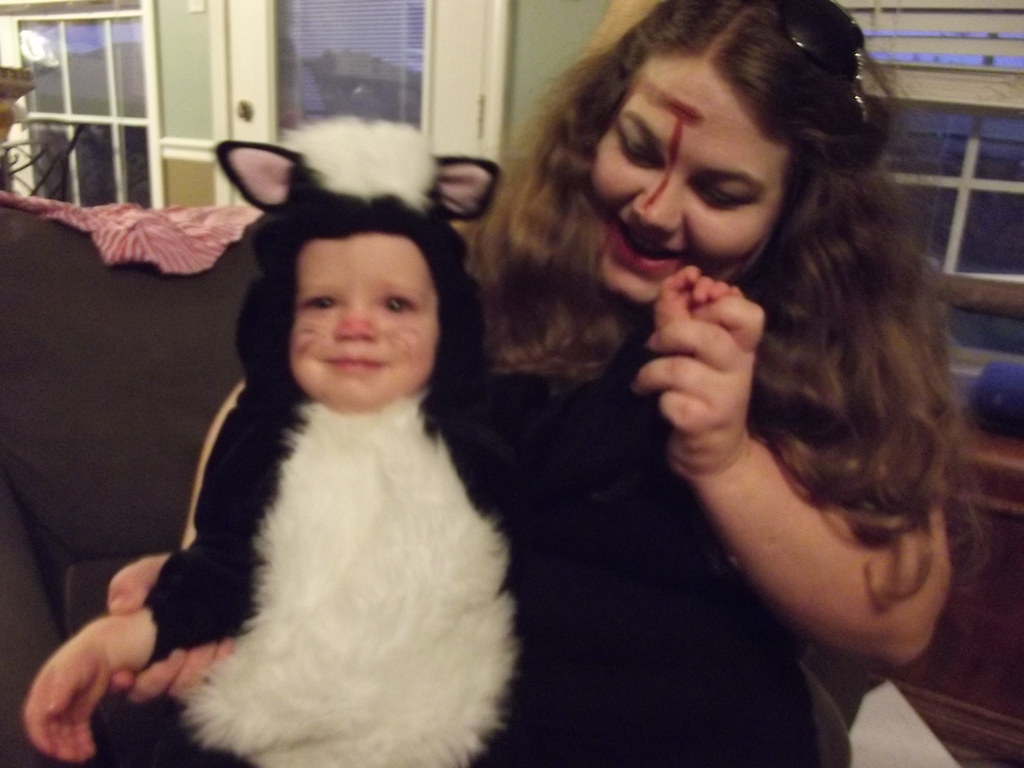 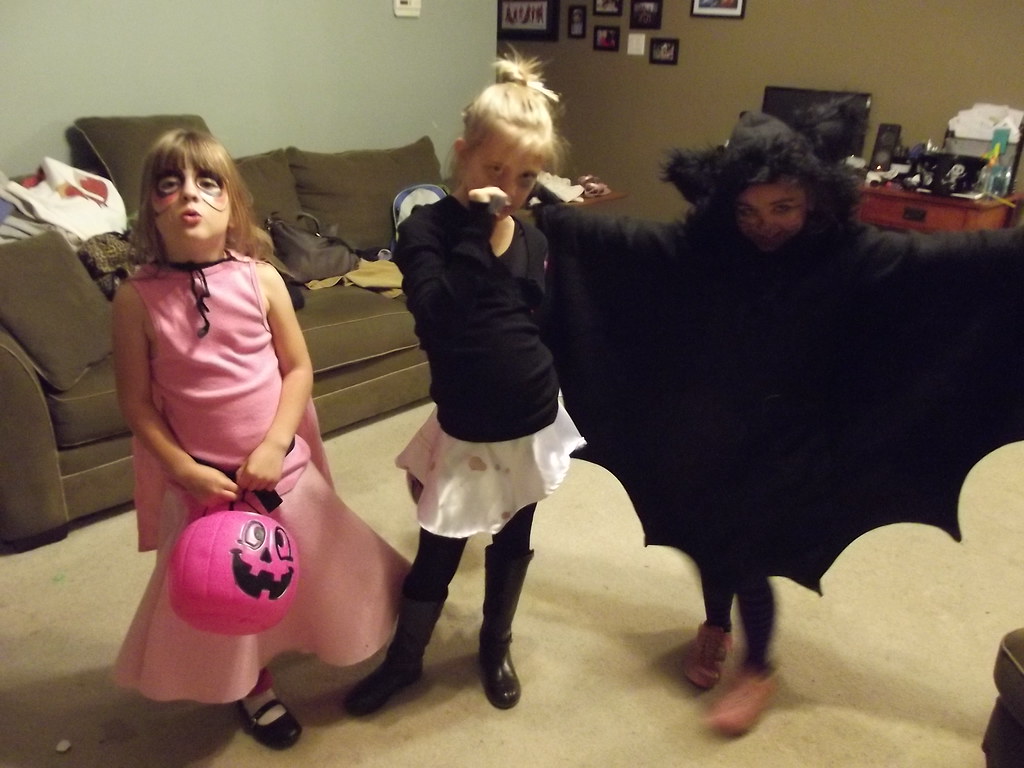 And finally, after hitting up all the houses in the neighborhood and filling each kids bucket with about eight pounds of tooth decay, we piled back in the car for our second annual Trick or Treat at the Grandparents' Houses.  Fifirst we hit up my dad for some (more) candy and then we hit up my mom. 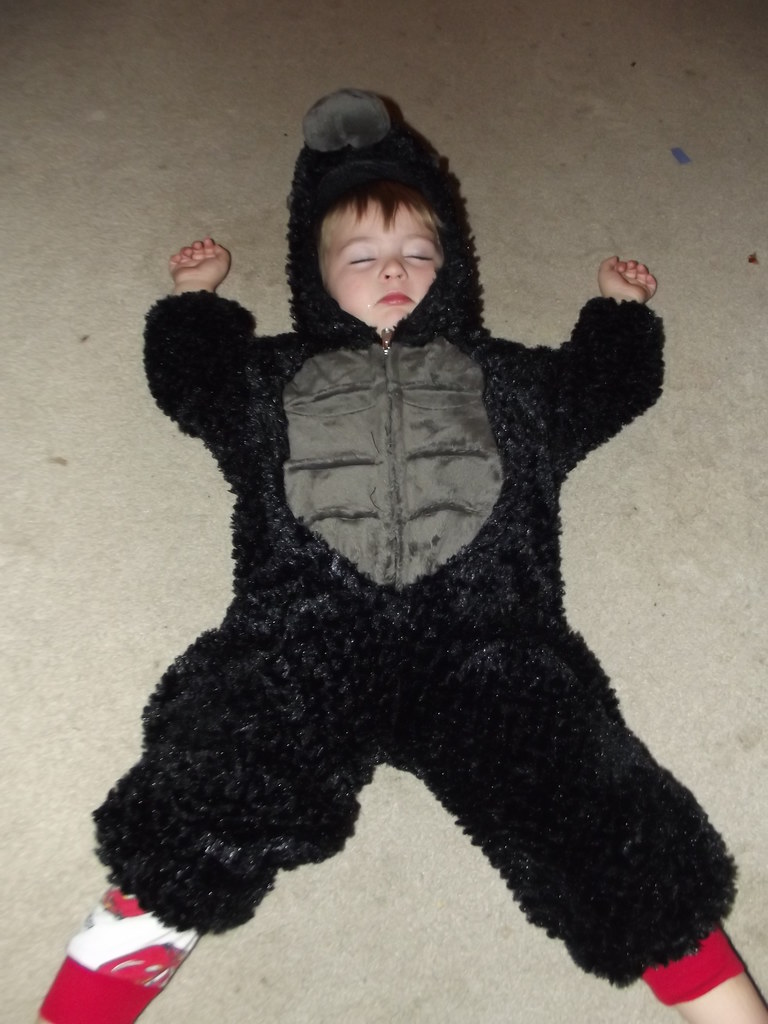 And after all the exhaustion of the last 48 hours, when by all rights I should've come home and crashed out on the sofa, somehow something crazy hit me and I sat down to balance six months of Pampered Chef accounts that I've been putting off for, well, six months.