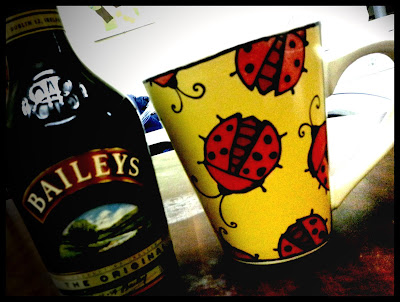 Tonight it's all about the simple pleasures. The little delights that get you through the day.

What a day I've had. It all began around 3am when Jaguar decided it was morning, and lay in bed, gurgling, kicking and squealing for an hour. Scott's snoring added a certain je ne sais pas to this early morning symphony. Then the pitter patter of darling feet running to our room - Fifi, who had had a nightmare, and Lolly on her tail. I finally got back to sleep somewhere around 5am, and was awoken by my safety alarm set on my phone... the alarm I set to wake me again if I sleep through the first alarm, the one that essentially says, 'The boy you take to school will be here any minute and will want to know why you are still in your pajamas IF YOU DON'T GET UP RIGHT NOW.'

After the school run, I came home and waited in all day for a delivery that never arrived. Upon phoning the company, it turns out it hasn't even been dispatched. It won't be in until Monday now. Booo.

And in the afternoon? Lolly was A BLEEDING NIGHTMARE. She was HORRENDOUSLY behaved. I was at my wit's end.

The day just continued like that, little things plus big things all set up to make my day as miserable as possible. Thank God for in-laws who came over after Scott's work and made us dinner and played with my insane children for me while I decompressed for five minutes.

Honestly, I was ready to start drinking by 3pm, but I knew I had errands to run in the car this evening.

I ran my errands after 7, came home around 9.30, and FINALLY, I was able to have a wee drink. Gin would've suited me better tonight, or wine, but Bailey's in a hot chocolate with marshmallows did the trick.

Guys, I am thankful for alcohol.

And for any teetotalers out there, Proverbs 31:6 - "Give strong drink unto him that is ready to perish, and wine unto those that be of heavy hearts." I was ready to perish today, and my kids were giving me a heavy heart. Yeah they were. Pass the hooch.
Posted by Lori Arnold at 5:02 PM
Email ThisBlogThis!Share to TwitterShare to FacebookShare to Pinterest
Labels: life, motherhood, nablopomo, thanksgiving30