I'm out tonight for the last GLOC show in the Arts Guild. Afraid I won't be home before midnight, I'm blogging from my phone.

I am thankful for nights out with friends, a baby who lets me get out and a husband who encourages me to go out.  I am thankful for having gotten the chance to get into the local amateur dramatics and being on stage and for meeting such fun people. 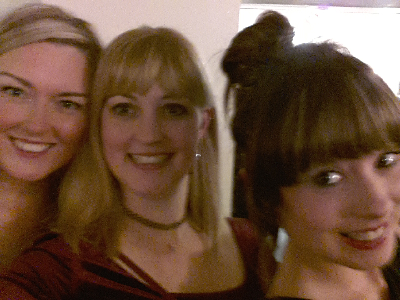 **EDITED TO EXPOUND**
Now that I'm home (and with ten minutes to midnight), I'll add a bit more.

I did theatre and acting in high school. It was my life. It was all I cared about, but I went away to University and firmly put all that behind me (sour grapes and stuff). I never expected to do that kind of thing ever again. But I still enjoyed going to the theatre and seeing shows.

When I saw a sign in town advertising RENT in the Arts Guild, I was mega-excited and dragged Scott along to see it with me. I didn't know anything about there being local groups, and just assumed it was a touring company. That is, until I was there, and someone behind me said they were there to see a friend from work perform. That's when I discovered these were local people, and there must be some sort of amateur dramatics community.

Fifi was doing Highland dancing and ballet at Jackson Dance Academy, and having seen advertisements in her studio for shows in the Arts Guild, I asked Linda (the dance teacher) if she knew anything. She gave me a few numbers, told me about a few auditions coming up, and I inquired. Next thing I knew, I was auditioning for Footloose, a nervous wreck!

From then on, I've been hooked. I've done several shows locally now, and have had the best time of my life, rediscovering a passion I forgot I had. Just now I'm two weeks away from opening night of Puss In Boots, a pantomime, and also two weeks away from auditioning for Sound of Music. I'm so thankful to have this outlet, to be able to sing, dance and act on stage again, and for all the wonderful friends I've made doing it.

I love you guys! (And for Lee, who will be reading this, YER MAW!)