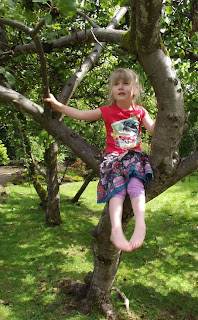 When I was very young, my Mamaw and Papaw had an apple tree in their front yard. The apples always seemed hard, green and sour, or alternatively brown and rotten, with tiny squidgy worm holes twisting through them, but I never wondered about the nutritious quality of this tree. The apple tree wasn't about spicy apple butter or bubbling fruit cobbler to me; it was a genuine (pronounced 'jen-yew-WINE') Enemy Fortress, a hide-and-seek base, a leafy landmark in summertime where so much play was made.

My big brother Danny and my cousin Nathan and I used it as a fort from The Babies. The Babies were my little brother Matt, my little cousin Josh and sometimes my little cousin Sara. They weren't exactly Babies and really resented being called such, making the title that much more necessary and glorious. They would try to play with us, and we would run away from them and make refuge in its branches - only enough branches for the three of us, me always on the lowest one because I was a scaredy-cat climber. But there The Babies couldn't reach us, and in that tree we bathed in the sunny, sweaty pleasure of being older, wiser and freer than our smaller siblings.

We fashioned weapons from rusty parts found in Papaw's shed, stirred wheelbarrow soup with muddy water in the driveway and wild onions, and buried time capsules of precious toyland artifacts in dented Folgers tins. Playing at Mamaw and Papaw's house meant outside Arkansas heat and dust, old scraps of metal, bumblebees, Sloppy Joes, a loud air conditioner, cousins and that old apple tree. It meant helping Papaw haul hay on his automatic hay-hauler - and taking turns riding it up up up and being dumped plum down into a barn of hay - and helping Mamaw dust her china cabinet and watch Lawrence Welk on blue velvets sofas. It was Sunday family after-church potlucks, the grown-ups crowded around a big wooden table in a linoleum-floored kitchen and us cousins around a fold-up green card table eating baked beans, taters, okra and corn from the garden, and roast beef.

Then one day all of a sudden we found ourselves all grown up, and that apple tree just seemed a neglected little cluster of branches that loosed brown unedible fruit to the ground, and the mud puddles in the driveway, once a broth, now only served to ruin expensive shoes, and the loud air conditioner wasn't enough to fend off the flies and the Southern heat exhaustion. And Mamaw and Papaw were old, and Papaw didn't bail hay anymore because the cows had been sold, and Mamaw couldn't get around because the Parkinson's was so bad. We had lives to live and people to see, and stopping by on the way to the movies was a checkmark in the box.

Then there was college, and we all moved away - Danny to Terra Haute, Nathan to Dallas, me to Fayetteville. Then there were careers and families - Josh to Baghdad, me to Scotland, Danny to San Antonio. That apple tree just kept standing, never getting taller, never making any apples worth eating, but still standing, always standing, summer after summer after summer, while we moved on, and Papaw kept busy outside in the heat and Mamaw kept watching her reruns in the company of her collection of porcelain dolls, growing older and more tired.

Somewhere down that dusty gravel road of time, Papaw got too old and Mamaw got too frail, and they had to leave that old workshed and hay barn and linoleum floor and dolls behind the glass cabinet. Somewhere down that road I started to see the man and woman inside those two old bodies, but by then it was too late and I was too far away to come back and just sit with them, watching Lawrence Welk and shucking corn. All that time I was seeing that apple tree as a bearer of useless fruit, but the point of that apple tree wasn't what it could give us but what it was able to be for us- a fortress, a safe place, a foundational landmark on which to build our budding lives. All that time we played in that tree, we were playing in the haven of those two people who were offering us a home, a hide-and-seek base, a dinner table where the whole family came together and ate okra from the garden. It was me who neglected to pick the apples when I got too old to climb the tree, and now I'm too far away to be a fortress for them, to give back a little of what they gave me. It shames me that I didn't see this I was close enough to stop by, and it burdens me to dwell on it only now when I'm too far.

My cousin Josh, one of The Babies, lives in that house now. I bet that apple tree is still there, but I don't know if it means the same to him, it being the enemy fortress of his big brother and older cousins. I don't know if a tasty apple ever did fall from that tree, and I just never saw it, but now I see that fruit worthy of the sweetest baked pie did come from the 'jen-yew-WINE' tree-fortress of my grandparents' hearts, and though it may be too late to ever say it to them face-to-face now, I thank you desperately from the bottom of my very own growing older heart.
Posted by Lori Arnold at 3:04 PM
Email ThisBlogThis!Share to TwitterShare to FacebookShare to Pinterest
Labels: Arkansas, childhood, family, home, life, ultimateblogchallenge