1. What did you do in 2012 that you’d never done before?
Gave birth completely naturally (to a son!) with no augmentation or assistance. :D

2. Did you keep your New Years’ resolutions and will you make more for next year?
My goal last year was to blog more. I didn't manage to succeed until October for the October Dress Project, but at least I got there in the end!

This year, I just want to resolve to live simply, unmaterialistically,and give myself a break from taking on too many responsibilities.

3. Did anyone close to you give birth?
My friends Catriona and Sharon both gave birth to little girls this year, alongside me.

4. Did anyone close to you die?
Thankfully no one this year died, though my grandmother was touch and go for a while.

5. What countries did you visit?
We didn't really travel at all this year. I rang in the New Year in America, but I'd travelled there in the year before, so I don't think it counts.

6. What would you like to have in 2013 that you lacked in 2012?
A simplified, uncluttered wardrobe, house and life. 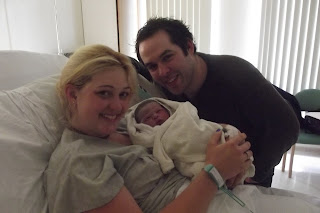 7. What date from 2012 will remain etched upon your memory?
The eleventh of July - the day my perfect son was born. Though I keep getting mixed up with the 7/11 or 11/7 part. I'm not good with numbers as it is; give me a rhyming pair and I'm hopeless. I'll forever get it confused.

8. What was your biggest achievement of the year?
I already said it, but giving birth totally naturally meant the world to me. After a C-section with Fifi and an induction with Lolly, I was sort of convinced my body didn't know how to bear children. Going into labour spontaneously and birthing with no assistance or painkillers (except gas and air) meant so much to me. It was my biggest achievement for certain.

9. What was your biggest failure?
On the same topic, I didn't get my homebirth. Again. Three times I've attempted a homebirth and three times it just wasn't in the cards. I suppose it's wrong to think of it as a failure, but at the time it sure felt like it.

10. Did you suffer illness or injury?
I went through a period of depression during my pregnancy, which also happened when I was pregnant with Lolly, so I think maybe that's just how my hormones work. But it wasn't terribly serious in hindsight, though going through it was very difficult. 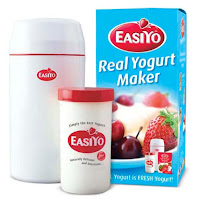 11. What was the best thing you bought?
Let's see... my Samsung Galaxy III, my EasiYo maker and my Booby Tubes.

12. Whose behaviour merited celebration?
This year I'm going to give credit to my daughter Fifi. She has really grown up this year, and her maturity really shows. She is very loving, mostly obedient, and a great kid to have around. She is helpful and smart, and I'm really proud of how grown up she's become.

13. What regrets do you have about the past year?
I can't say I have any regrets. Not everything was perfect, but I wouldn't call anything a regret.

14. Where did most of your money go?
Necessities. Last year I had money to spend, because I'd been childminding. But I went on maternity leave this year in June, so we've been living on a budget again. And most of my spare money went into starting my new company IntoBento.co.uk. 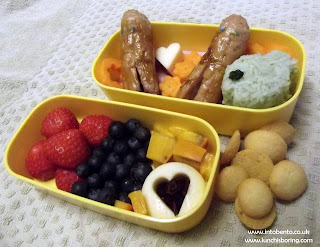 16. What song/album will always remind you of 2012?
It's not a song/album per se, but the theme tune to How I Met Your Mother will always bring back strong feelings and memories of me hibernating in my bedroom for weeks, preparing for my intended homebirth with Jaguar and watching six seasons straight of this show.

17. Compared to this time last year, are you:
happier or sadder? I have been so much happier this year.
thinner or fatter? Fatter, thanks to baby weight. Need to get that sorted in the new year!
richer or poorer? Poorer, thanks to maternity leave!

18. What do you wish you’d done more of?
Exercise.

20. How did you spend Christmas?
We spent Christmas this year at Scott's mum and dad's new house. It was a really lovely, cosy Christmas with our family of five, Kate and Faisal's family of three and Scott's parents. The kids had a great time, and it just felt really nice.

21. Who did you spend the most time on the phone with?
My mom, I suppose. Having a new baby means needing lots of support from your mommy! 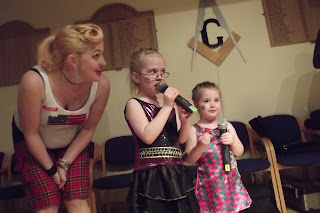 22. What's your best memory from 2012?
I had a few really great memories:
-My 30th birthday party, which had a 'Music Mania' theme. It was one of the best birthdays I've ever had.
-Singing Evita's "Don't Cry For Me Argentina" in the OGA Parish Players Spring Revue.
-Giving birth to Jaguar (I loved every minute of it, even if it was rather uncomfortable!)
-Going out for my friend Elaine's 40th birthday with her, Heather and Paula.
-The Enchanted Forest with Scott for our anniversary. It was incredible this year - my favourite one yet.

23. How have you seen yourself grow as a person this year?
Ohhh, for the hard questions.

This year I've come to terms with a lot of things, namely my grave uncertainty of my faith. I have spoken of this already in length here, so it's not necessary to rehash, but what I've realised is that I am okay with where I am spiritually right now. I choose to continue living a Christian life and holding on to the faith while simultaneously acknowledging that I don't know if it is true, I can't believe it completely and I will probably never be able to believe wholeheartedly again. But it's the life I'm choosing to live, and if God is truly out there, I believe he will accept me for choosing to follow despite my unbelief.

A separate thing I learned about myself is that I am far too materialistic. Through the October Dress Project (wearing the same dress for 31 days), I realised I a) don't need half the stuff I have and b) can be very creative with my clothes if I try. So I'm in the process of trying to clear out everything and getting a non-cluttered, simplistic wardrobe that allows me to experiment with creative outfits.

24. What was your favourite TV programme(s)?
I enjoyed watching How I Met Your Mother, Big Love and Misfits.

26. What was the best book(s) you read?
I did a lot of reading earlier this year before Jaguar was born but can't for the life of me remember what. A lot of re-reading old classics. I started out with Toni Morrison's Beloved, F. Scott Fitzgerald's The Great Gatsby, and I can't remember what all else. I read a LOT of books though but not very many new ones. If I'm correct in thinking though that I re-read Angle of Repose by Wallace Stegner, then that would be the best book I read. It's one of my favourites.

27. What was your greatest musical discovery?
Scott introduced me to a few really good new songs on a mix CD he made for our trip to Pitlochry, for instance these two by Jonathan Coulton.

29. What did you want and not get?
A homebirth.

30. What were your favourite films of this year?
The Perks of Being a Wallflower was really, really good. 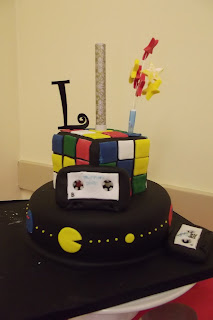 31. What did you do on your birthday, and how old were you?
This year was my 30th, and I had a big party at the Masons Lodge. It was fancy dress (Music Mania theme) and karaoke, and I had an awesome cake, a DJ and a load of great friends there. It was an awesome birthday.

32. What one thing would have made your year immeasurably more satisfying?
It would've been really great to have had a summer. Unfortunately, it just rained and was cold all year long. It would've been much nicer if we'd had just a few months (or even one!) of sunshine to live our spirits. No wonder Scottish people are known for being dour. 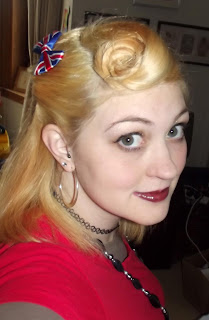 33. How would you describe your personal fashion concept in 2012?
Maternity?! At least for the first half of the year! I went through a rockabilly stage with my hair and would love to still be doing it, but after Jaguar was born, there was just no longer the time to spend on my hair like that. Plus, I cut my bangs back in on a whim and that kinda kills the suicide roll thing. I've also started wearing make-up regularly. Which reminds me, I need to put some on now...

34. What kept you sane?
Having a really sweet, happy, content, easy baby who sleeps and feeds wonderfully, instead of the opposite!

35. Which celebrity/public figure did you fancy the most?
This question is always so silly to me. Time to change it.

35b. Which holiday or special occasion meant the most to you?
Our wedding anniversary this year was really special to me. It wasn't a big year (8), but we spent it in the same place we spent last year's anniversary, and it was then and there that Jaguar became a part of our family. We went to Pitlochry to The Enchanted Forest again, had lunch in the same little bistro we'd sat in last year talking about baby names in case we were indeed to get pregnant, and stayed in a lovely hotel (not the same one) eating great food and relaxing in the pool and the spa.

36. What political issue stirred you the most?
American gun control, health care and same-sex marriage. I'll keep mum about my opinions on each though! This is not a political blog. :)

37. Who did you miss?
I missed my American family and friends so much this year.

38. Who was the best new person (people) you met?
I have become friends with Lolly's best friend Eden's mum, Laura. She is a sweet, generous, honest person, and I'm so pleased to have gotten to know her and her three interesting and precious daughters this year.

39. Tell us a valuable life lesson you learned in 2012.
Two things:
1) I have so much more than I need. I am materialistic, and all my 'things' end up making my life harder to manage. I can get by on so much less and would probably be happier doing so.
2) As much as I can plan and organise and see to every detail, nothing in this world is totally in my hands. Maybe it's in God's, maybe it's in no one's, but it's certainly not in mine. It is okay to plan, but at the end of the day, things will happen as they will happen and not always how I thought they would.

40. Quote a song lyric that sums up your year?
This is totally embarrassing, but the lyrics from Katy Perry's 'Firework' summed up a lot of feelings for me this year.

'Do you ever feel like a plastic bag
Drifting through the wind, wanting to start again?
Do you ever feel, feel so paper thin
Like a house of cards, one blow from caving in?

Maybe your reason why all the doors are closed
So you could open one that leads you to the perfect road.
Like a lightning bolt, your heart will blow
And when it's time, you'll know...'