Letters to My Past Self 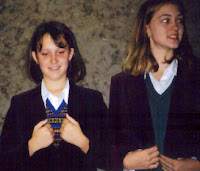 Oh there is so much I wish I could tell you. First of all, I know school is boring and easy, and you can pass tests without studying, but please, learn to study. Learn to sit down and do your homework every night. It's easy at the moment, but you've not been to college yet.

Furthermore, take AP European History. I know you don't like history now, but one day you'll be very interested in it, not to mention you'll be living in Europe and will feel stupid about what you don't know. You'll also be doing your GPA a big favour. You'll end up a few decimal points short of what you really need if you don't.

On the subject of boys, don't put all those eggs in that one basket. He's the love of your life now, but he's not the one for you. In just a few short months, he will turn into a completely different person, and you won't even recognise him anymore.

One more thing. You are beautiful. And skinny. You will never look so good in shorts as you do right now. You think you've got a big butt, but you don't, not even close. You hate your nose, but it's cute too (and one day you'll finally get that nose ring you've been wanting all these years but more on that later). 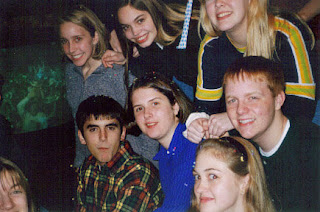 First, this guy is not for you either. He's rebellious and exciting, but you will compromise yourself too much with him. He'll end up telling you the truth soon about how he really feels about you, and it will tear you apart. LEAVE NOW.

And that other guy from before, stop letting him string you along. He is manipulative, and you need to stand up for yourself. Despite what you still secretly think, HE IS NOT THE ONE. (In fact, neither will be the next two guys you will get serious about.)

Second, why are you smoking pot? It's fun but please, just stop now. It's going to get you into trouble next year.

The senior play? No, you didn't get the main part but that doesn't mean the director hates you. You may feel it's unfair, but that's life. She doesn't hate you. She just didn't cast you.

Stop fighting with your friends. This is your last year together, and believe it or not, a group of friends this tightly knit does not happen to everyone. You are so lucky to have this group, so stop letting high school drama (literally) divide you. Enjoy this last year together, because some of these girls you won't see again for a very, very long time... some of them I've still not seen since graduation. You won't even make it to your 10 year high school reunion to see them there.

Please don't forget to thank your mom and dad profusely for letting you go to Boston on the Forensics trip.  To you, it's just money.  To them, it meant scrimping, saving and doing without, just for you.  You better not forget to thank them. Over and over.

Remember all that stuff about studying and taking extra AP classes? I still mean that. If you don't pull off a couple more A's instead of B's out of laziness, you will not get the GPA you wanted. Just sayin'.

Also, as it turns out, you can take the top scores in each category of all your ACTs combined to get a final ACT score. I *really* wish we'd both known that at the time.

Speaking of ACTs, you won't be going to college in Texas, so don't waste your time not applying in-state, because you will miss the scholarship deadline and end up paying back a student loan for the next twenty years.

Finally, you are still beautiful and creative and intelligent, no matter what those boys make you think of yourself. You are worthy of respect. Demand it. 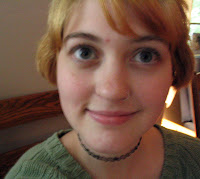 Dear Lori (20),
If I could, I would reach back through time and just hold you tightly, whispering the truth of the happy future you have ahead of yourself. It hurts so badly right now, I know. I remember.

It's not the end. It's only the beginning. I know you really, truly believed this time he was the one, and I know you were this close to what you thought would be lifetime happiness, but he wasn't meant for you. He's a wonderful guy, but he's not for you. He has someone else out there waiting for him and so do you. Yours is literally around the corner. If you were still with him, you'd have missed the real happiness that was meant for you, the guy who thinks it's cute, not embarrassing, that you like the Spice Girls.

Besides that, I've got some practical advice for you.

You've been wanting that nose ring since you were 15, I know. But your parents aren't kidding; they WILL stop paying your tuition if you get one. You may like the idea of becoming independent of them and running your own life, but do you KNOW what spending the next twenty years paying off a student loan will be like? Can you not just wait one more year? You've waited this long already.

At least you kept your tattoo hidden until graduation. Well done. You'd have lost a car if you hadn't.

Don't drop out of your Arabic classes, and go ahead and do Middle Eastern Studies as your minor.  It will be so worth the hard work.  (And the job opportunities...!)

And please keep that green jumper. You'll only regret throwing it out.

Anyway, I'm proud of the person you're becoming. You've learned (albeit the hard way) how to study, you're on your way to graduating University with Honors, and you're a hard worker at your jobs. Not to mention those poems you are writing? They will still impress you even a decade later. They are really good. 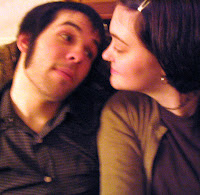 Love,
Lori (30 and happy to be with him and your three future children)

What would you say to your past self if you had the chance? Leave your comments below.
Posted by Lori Arnold at 9:54 AM
Email ThisBlogThis!Share to TwitterShare to FacebookShare to Pinterest
Labels: letters, life, lists, ultimateblogchallenge