Eight Robert Burns' Days I have lived in Scotland and never have I celebrated with an official Burns Supper. How is it that I have never told this story on this blog?

(Well, I told it briefly back in 2004 when it actually happened... you can read about it here.)

I guess, actually, that gives you the gist of what went down but not in all it's gory glorious details. So commence the retelling.

I was 22 years old, engaged to my Scotsman, and in the process of filling out my visa application forms to move to Scotland to live with him forever. I was still at University, finishing my English major, and I had a crazy professor, Dr MacRae, who was a major Scotophile (Celtophile? Caledophile?). She told me about a Burns Supper organised by the Fayetteville League of American-Scottish Bastards, or whatever their official title was, and invited me to join her.

I (apparently, according to the above-linked story) paid $22 for my ticket and looked forward to my first experience as a fellow American Scottish-wannabe.

I admit, I had no idea how to dress for the occasion. I now believe this to have been my primary mistake. I couldn't get in touch with Scott that evening due to the time difference, as I tried to decide what to wear, so I opted for semi-casual - a nice pair of jeans with a pretty green jumper, and stylish shoes.

When I arrived at the hotel (and it was just a normal Comfort Inn, we aren't talking the Hilton here), I was escorted to a meeting room decked out in green tartan and thistle centrepieces. I handed over my ticket and scanned the room nervously for Dr MacRae; no where to be seen. I plucked up some nerve, and approached a half-empty table and asked if I could have a seat. A shriveled, faux-riche woman in a velvet evening gown (and no Scottish accent, mind you) informed me that all the seats at her table were taken. So I went to the next half-empty table. An overweight jerk in full Highland regalia and a monocle (okay, I might be imagining the monocle) told me the same (with no Scottish accent, either *cough*). Table to table, I was given the same line by kilted and evening-gowned men and women with lots of money, an obsession with Scotland and a superiority complex due to some ancient ancestor who may or may not have been a sheep rustler somewhere in Leith four centuries ago. No one let me sit at their table. Finally, I just stood by the door, embarrassed and under-dressed, waiting for Dr MacRae to arrive, gazing longingly at the still-empty chairs at nearly every table.

Then, the bagpipes started, and a man brought out the haggis, and I was still standing at the back with nowhere to sit and no one to sit with. Fighting back angry tears, I quietly slipped out the door and headed back through the lobby, out the glass doors, and back into my car.

I was raging. And humiliated. Perhaps a few of those people had been genuine Scottish ex-pats, but I felt I had just as much right to be there as the rest of them, as one who was immigrating to Scotland in only a few short months. Not to mention one who had paid for a ticket! The next day, my professor asked me where I'd been, apologising for being fifteen minutes late. She was horrified when I told her my story. (I did, somehow, win a raffle prize though, which she had kindly accepted for me.) 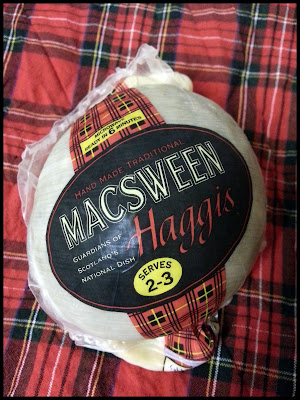 So here we are today, nine years later, on Robert Burns Night again. Last week, Scott bought us a haggis to prepare for the glorious occasion, but I never got around to buying the neeps (turnips) or tatties (potatoes) to go with it. No bother, Burns Supper we shall have - after all, 'we hae meat, and we can eat', so wrap the haggis in foil and cook it.

I raided the freezer and produced frozen corn, cauliflower, Brussels sprouts, Aunt Bessie's mashed potatoes and Tesco's Finest miniature steak pies. To help Scott with his keto diet, I also got out some bacon and eggs, and in the end decorated our table with a delightfully untraditional yet tasty (and mostly keto-friendly) Burns Supper of steamed veg, microwaved mash, fried bacon, devilled eggs, mini steak pies and a beautiful, flavourful haggis.

I don't know what Rabbie himself would've said to such a mix-n-matched meal, but I imagine it would've been something along the lines of 'Sae the Lord be thankit'. It was yummy. Scott read part of the 'Address to a Haggis', we taught the children the Selkirk Grace, and Fifi and Lolly spent the entire meal making up some crazy version of 'Auld Lang Syne' which included Robert Burns' name in it ('Burns lang syne' or something like that). Fifi and Lolly both tasted the haggis (Fifi didn't like it, Lolly did), and even Jaguar had his first taste of the Scottish delicacy. It was a special little evening.

Finally, though it was nothing official and there were no bagpipes, I have partaken in a Burns Supper at last. I can finally begin to heal from that painful memory in the days of yore.