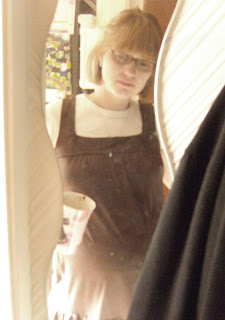 Sometimes things come up to write about that you never even considered writing about, whether because you didn't think people would be interested or you didn't even think of it as something to expound upon. We have experiences every single day; some of them are significant, some are insignificant, but most things can be related to, and many things can be valuable to others.

One of my friends asked me a question about an answer I gave on my 40 Questions. I mentioned that I experienced depression while pregnant with Jaguar and also with Lolly. I never thought much about it when I mentioned it, but actually this might be something worth talking about.

People are becoming very aware of post-natal depression, and it's about time. It's a very real and debilitating condition, requiring various levels of treatment from counselling to medication to lifestyle changes. Yet there's this other condition, very similar and closely related that receives little to no attention at all: ante-natal or pre-natal depression.

According to patient.co.uk, 10% of women experience post-natal depression. 10-15% experience depression ante-natally (and it goes up to 19-25% in poorer countries). But I had never heard of it, and I'm willing to assume most of you haven't either.

My pregnancy with Fifi was great, in large part thanks to my independent midwife Allison Ewing. But hiring a midwife is expensive, so come round 2 with Lolly, I knew I'd have to use the NHS (whose midwives in my area are thankfully really great, pro-natural birth and homebirth-friendly). Still, I worried. I was attempting a VBAC (vaginal birth after cesarean) and wanting it at home at that.

I thought my original sadness related to these concerns, but as the pregnancy progressed past seven or eight weeks, I became distraught. I didn't know what was wrong with me, except I knew the thoughts and feelings and wishes I had didn't make sense, weren't rational and most certainly weren't acceptable. I had feelings and thoughts I couldn't even share with Scott, I was so ashamed of them. Wishing for a miscarriage, envisioning doing harm to my toddler and hating myself and believing I was the wrong mother for this baby inside of me were some of the feelings that even now I'm ashamed to speak about.

I didn't know where to turn or who to talk to. I spoke to Allison on the phone but couldn't bring myself to tell her what I was really going through. I called a suicide hotline, but the woman had no idea what I was talking about and said frankly, 'It's just hormones, it'll pass.'

Incidentally, what a uninformed thing to say. 'It's just hormones.' Hormones are a (generally-speaking) uncontrollable aspect of our biology. Whether it's hormones, a virus or a deficiency, it's all serious.

After that, I couldn't speak to anyone, so I kept it all to myself. I tried positive thinking. I tried ignoring my feelings. I tried deriding myself into never thinking such awful things again. And after a few months, as I merged into my third trimester, the depression subsided. I was left thinking what an idiot I had been, how it had been 'just hormones' and what was I being so dramatic about?

I never really dealt with any of those feelings until I got pregnant again with Jaguar. Suddenly, around the same time, the same thoughts and feelings started trickling back in. But this time I was prepared. I realised this must be how my body works and this time I would work with my feelings, not condemn them.

This time, when thoughts of miscarriage came into mind, I knew I didn't really mean it and I didn't beat myself up over it. When I felt angry towards my children and worried I'd do something I regretted, I asked for help or removed myself from the situation or held them in a tight bear hug instead while I cried out all the anger. I let Scott in this time, and he helped tremendously, putting me to bed early every night, running hot baths for me every day, giving me lots of time away from the children to cope with my feelings.

This time around, my depression turned into an awful fear that I was damaging or even going to lose my child with my negative stress hormones pulsing through me. I was having a difficult time beyond the pregnancy with some things, and those things left me in tears most days. I asked for a referral by the midwives for SNIP (Special Needs In Pregnancy) but never actually got an appointment until I was almost full term. I knew I ought to chase it up, but part of depression is not wanting to burden other people, feeling like you are overreacting and need to get a grip of yourself but are unable to, and not having the energy or motivation to make yourself get better.

I worried this time it would last into the post-natal period, especially if I didn't succeed in getting my homebirth or if I ended up with an induction or section. Luckily, the depression lifted again at the end of my pregnancy, and even though my homebirth didn't work out again, I felt content that I'd birthed naturally at least without any assistance.

Even though I 'coped' better the second time around, it didn't mean those months were easy. They were stressful, upsetting, painful and isolating.

I have no miracle words of wisdom or any solutions for how to cope with depression during or after pregnancy; I only have my story, and I hope it helps someone else feel less alone in their struggles.