Tonight, we celebrated with cake, but not quite for the reason people might expect. 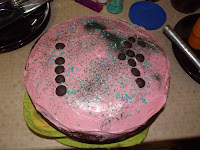 I've known for a couple of years now that this year Sideline Productions in Greenock would be putting on a production of The Sound of Music. I have looked forward to it for years, wanting just to be a nun and get to sing songs in soprano. I also looked forward to it, because I knew Fifi would be old enough by the time it went ahead to audition for the youngest von Trapp child, Gretl.

The Spring timing, however, wasn't exactly what I expected, and having just had a baby, I decided it was too soon for me to be hitting the stage again as full force as such a show would be. Still, I mentioned the subject to Fifi, asking her if it was something she'd be interested in. Her immediate response was a gasping 'YES YES YES'.

'You have to understand though, sweetheart, that just because you audition doesn't mean you will get a part. It may go to someone who did a bit better or who looks the part more. You may not get it.' I warned her.

Solemnly she replied, 'I still want to try.'

Parenthood is a constant tug-of-war between protecting and enabling in all kinds of different ways. In protecting our kids, we are ensuring that they don't get hurt, but we are limiting their life experiences. Yet with enabling, we are opening them up to very possible disappointment or even danger, depending on the circumstance. It's always hard to know which way to lean, and we often have to make judgment calls based on subtle gut feelings. Scott and I decided to let her go for it, and I braced my stomach for helping her bear the disappointment should the outcome be unsuccessful.

Fifi practiced and practiced and practiced. I heard 'Doe a Deer' for weeks on end, at first wildly out of key (and me fearing for her tiny self-esteem at each over-modulated note), but slowly, proudly, she found her voice, took instruction from her musician dad and singer mum, and grew aware of her 'keys'. She had trouble with the exact words at first - singing 'Tea - a drink of dealan-de!' which means 'butterfly' in Gaelic! - but she persisted until she got the words right too. We were so proud of her dedication.

Still, I knew the audition would bring tough competition, especially when I heard there were about 70 kids signed up! I myself have been through many an audition, and I know the nerves, the waiting, and the disappointment or excitement that follows. I still worried about inflicting this on my young child. Was I being a Stage Mom? Had I pushed her into this?

I asked her again: 'Are you sure you want to do this? You may not get the part.' Eyes rolled in her head like a fifteen year old instead of a five year old, she replied, 'I know. I still want to try!'

So I let her audition. That morning she woke up, crawled into bed with me, and through almost-tears confessed, 'I'm nervous.'

'Baby, even mummy gets nervous. In fact, even famous people get nervous! You know all the famous people on TV? Even they get nervous. But here's the secret - the people who get the parts are the people who follow only two rules. One, smile! And two, have fun. I promise you, if you don't do those two things, you won't get the part. But if you do, you'll be one of the ones they notice.'

Fifi auditioned. I wasn't able to be in the room with her, so I didn't know how she performed, but when she came back out of the room, I hugged her anyway and told her I was so, so proud of her.

I smiled, hugged her again, and said, 'I don't know, sweetie, but that's not what I'm proud of. I'm proud of how brave you were. And we are going to celebrate.'

Fifi could hardly get to sleep last night. I told her we wouldn't know anything until way after bedtime and probably not even until late the next day. Still, even I felt the nerves taking hold as I waited for that nerve-wracking email. I had braced myself for bad news. Of so many children, her chance was slight. I prepared how I would break the news to her, and was ready to take the emotions, however they manifested.

I was feeling so torn; life lessons, maybe they don't need to be learned until kids are older. Maybe schools taking out winners and losers is the right thing after all. Maybe kids are too young to be put through disappointment. Months of work and feeling went into Fifi's little five-almost-six-year-old self-esteem, and I was allowing the danger of disappointment in. Had we done the right job, should we have protected her instead of enabled her?

But the story isn't about me and my decision as a parent. The real heroine of this story is Fifi, who knew the chances and wanted to try anyway. We may have drilled into her more the probability of her not getting a part than the possibility that she might. Still, she wanted to try, and what a brave little heroine she turned out to be!

She woke up this morning, ran to my room and asked if I'd heard. I said I didn't think we'd know anything yet, but we checked my email together anyway.

There was an email.

I opened it, practically trembling myself, and resisted the urge to quickly scroll down to the important part. I read the email out loud to her, and together we learned that...

'Your child has been cast in one of the following roles.'

Fifi and I squealed! Daddy woke up, guessed right away, and took her into a bear hug. Lolly heard the noise, ran to the room, and jumped on her big sister with the kind of pride and selfless enthusiasm only best friends can understand. 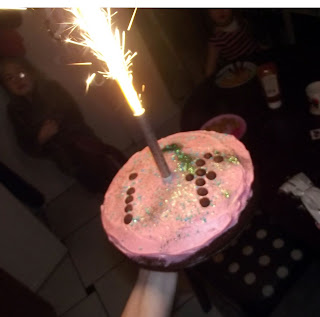 Lolly suggested we celebrate with cake. Wise child, very wise. This evening, Lolly and I made the cake that we would have made anyway, part or no part, because we were celebrating the effort, not the outcome. Obviously the outcome made the celebration that much more exciting, and as mum and dad and sister, we are all bursting at the seams with happiness and pride for her. But most of all, we were celebrating the confidence of a little girl prepared to try and even fail for something she was passionate about. How many adults can say the same for themselves?

So we ate cake. We broke our New Year's Diet Resolutions for a slice of pink (of course pink) cake with sprinkles (gotta have sprinkles) and a big sparkly candle.

Fifi, remember always the little song we sang in the car, you, me and Lolly, that nervous morning: "I'm a superstar and I'm coming out tonight!" You really, really are.
Posted by Lori Arnold at 5:55 PM
Email ThisBlogThis!Share to TwitterShare to FacebookShare to Pinterest
Labels: family, food, kids, motherhood, New Year's Resolutions, theatre shows, ultimateblogchallenge