Memoirs of a Beauty (?) Queen

I used to be in beauty pageants. There. I've said it. There's just no easy way to work in that little tidbit of information without just coming out and saying it. It's like pulling off a Band-Aid (or boob tape); you just gotta rip it off.

I consider myself a rather modern, demi-feminist who believes in raising girls outside the gender stereotypes and praising her daughters for their intellect and imagination over their outward beauty and appearances. So believe it or not, I'm not ashamed of my beauty pageant, or shall I say 'scholarship pageant', history; the pageants were about more than physical beauty. However, I can say, I'd make a far better contestant today than I did when I was seventeen.

My pageant career was, admittedly, short lived. I entered two pageants my Junior year of high school, and no more. If I could enter a pageant now, I'd probably kick serious pageant ass, but back then, my confidence was quite a bit shakier and not immune to the evil pull of the Pageant Dark Side (a.k.a., the 'beauty' part).

I have only half-memories of those two events, but I'll share what I remember of them with you anyhow.

First, I remember waiting in the wings, a line of young girls in women's business suits, preparing to walk across a stage poisedly, winning-smilingly, looking out at the audience while managing not to trip up in heels we weren't used to, to answer the on-stage Impromptu Question. My stomach was churning, and I literally thought I would puke. As the girls ahead of me were asked random questions on index cards by a smiling blonde with a microphone, I mentally imagined my brilliant answers to each in an effort to assure myself I'd be able to answer my question effortlessly and charmingly. Then it was my turn. I tried to glide across the stage in my mom's heels but probably looked like a seventeen year old hair-sprayed giraffe. I introduced myself to the judges and audience and fake-smilingly awaited my question.

"If you could have dinner with any person in history, who would it be and why?"

Suddenly I could think of literally no human being past or present who wasn't Adolph Hitler. And I certainly couldn't sit down to dinner with him in front of hundreds of people and four judges. Quickly, quickly I jogged my memory for a name, any name, any person probably dead, and said 'Audrey Hepburn.'

People, I can assure you, this was the stupidest name that could have crossed my lips. I had never even once seen a picture of Audrey Hepburn, let alone a film, and I knew absolutely nothing about her except I was reasonably sure she was related to Katharine, and she was possibly in Casablanca, which I'd also never seen. (Incidentally, I was wrong  on both accounts.)

So, why would I have dinner with Audrey Hepburn? I had no idea! But I had to say something, so shakily, determined my plastic smile would not falter, I said something about her being a confident role model and a great actress, and I wanted to be like her and thank you very much please freaking applaud so I can get the heck off this god-forsaken stage and lather my sweaty armpits in more deodorant.

That was my worst memory.

Only slightly less humiliating was the Personal Interview. I don't remember if there was a personal interview at both competitions, because I only remember this one. That may, of course, be due to post-traumatic stress. Anyway, I had written on my application under Achievements or Accomplishments or Crap That Makes You Look Interesting that I had won second place in the state for mime. One of the judges was quite intrigued by this and asked me some questions about mime, which I was happy to answer.

"Perhaps you could do a bit of mime for us now? Perhaps a mime about how you felt getting ready this morning?"

What. The. Freaking. Hell.

There was no other recourse than to oblige. I stood up, completely unsure of what to do, especially considering that I'd done nothing that morning of note, nothing that they were looking for anyway (I hardly felt watching TV until it was time to get dressed was what they wanted to see me doing in preparation for the interview). I performed some sort of get up, look nervous, eat breakfast, get dressed, contemplate nervousness and finally settle into acceptance routine and sat back down, hoping that actually the Rapture could just come right then and there and save me from having to face the rest of the interview.

The Rapture didn't come, but as it turned out, the judges loved it, and awarded me that night with the Miss Interview Award. My only pageant success and worth $500 in scholarship money.

In the Talent category, I sang 'Happy To Keep His Dinner Warm' from How To Succeed In Business Without Really Trying in one pageant and 'Adelaide's Lament' from Guys and Dolls in the other. Neither of those were very memorable - I remembered my words, sang in tune, but certainly didn't blow the audience out of the water. My friend Christie though, will never be forgotten for 'ballet' tribute to The Sound of Music's 'My Favourite Things'; it's not that she wasn't very good or made any big blunders, but just the fact that she had never done a single step of ballet in her entire life and spent the whole song traipsing around the stage in a made-up-on-the-spot interpretation of something akin to psychotic ballet. It was incredible and awful all at once and really should've won the Most Awesomely Entertaining Award, even if they had to make up that award on the night and steal money out of the winner's scholarship designation to pay for it.

Despite all the humiliations, my last memory of these competitions is the main reason I could never bring myself to compete again after my two attempts at pageantry.

I wore my prom dress for the Evening Wear category - a gorgeous, unique red silky gown with a slit in the front and a flattering neckline. I was a skinny seventeen year old, looking back at photos, though like most girls of that age, I hated my body. Still, in that dress, I felt amazing and beautiful and thin and perfect. My hair wasn't that perfectly styled and my make-up wasn't expertly applied, but my dress was to die for, and I looked a million bucks in it. 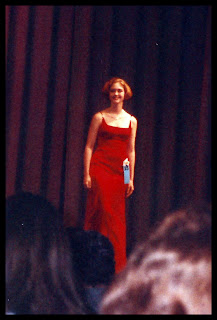 I walked across the stage in that dress, forgetting all about my heels and how I was supposed to walk, because I exuded confidence in it. I didn't win the Evening Wear category, but I didn't care - I was confident that I was at least one of the runners up, I had to be, I just looked so stunning.

Then after the pageant, while speaking to people who had been judges in the past, getting critiques on what I did well and what needed improvement, I was told,

"You should've sucked in your tummy. You had a bit of a gut in that dress."

I am so fat, I realised.

To this day, I can't see photos of myself in that dress without seeing my bulging belly and thinking, 'I should've sucked that in.'
Posted by Lori Arnold at 4:00 PM
Email ThisBlogThis!Share to TwitterShare to FacebookShare to Pinterest
Labels: beauty, life, memories, ultimateblogchallenge