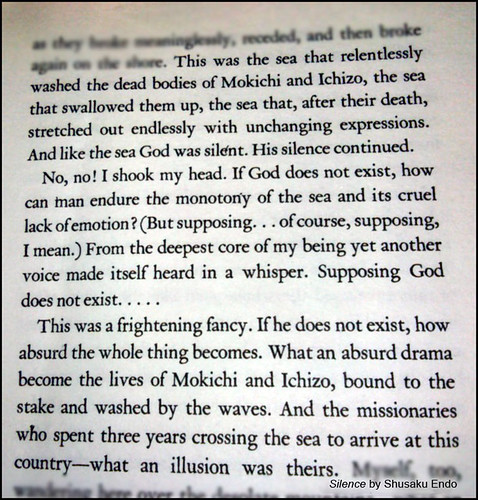 In early 2013, in the throes of my faith crisis, I read the book Silence by Shusaku Endo.  Endo was a Catholic Japanese author whose books often centered around characters faced with impossible moral and spiritual dilemmas. I'd learned of the book through Philip Yancey's book Soul Survivor. From Yancey's description, I was certain it was a book I needed to read.

I'll do my best to avoid spoilers - because everyone should read this book - but it is an historical fiction set in the 1600s after Japan made Christianity illegal.  Silence tells the story of Portuguese priest Sebastian Rodrigues who sneaks into Japan as a missionary (based on the real historical person Giuseppe Chiara). Rodrigues has two reasons for coming to Japan: one, to minister to the Christians in hiding who had been without a priest or proper instruction of the Scriptures for years, and two, to find out the truth of his previous seminary teacher who was rumored to have apostatized.

At this time in Japan, Christians faced two options: apostatize by trampling on the fumie, a wood and bronze picture of Christ, or be tortured and executed. The rumor that Father Ferreira (also a real historical figure) had trampled the fumie and was living as a Japanese had reached Europe, but Rodrigues refused to believe it.  He had known Ferreira well, he knew what a solemn, faithful priest and follower of Christ he had been. It was impossible.  He was determined to find the truth.

As the story progresses, Father Rodrigues faces all kinds of trials which lead him to question the existence of God.  At that I will leave you. I don't want to spoil any plot lines for you (because it's so worth reading).


I read this book for the first time while I myself was questioning the existence of God.  I felt utterly ridiculous and humbled comparing myself to anyone in Rodrigues' shoes - or as the case may be, sandals - as I was in no way suffering as one witnessing peasants being brutally martyred or fearing for my own life. But regardless, I felt that I and Rodrigues were facing the same inner conundrum - the silence of God. His prayers echoed my prayers; his pleas were identical to my pleas; his desperation closely resembled my desperation. 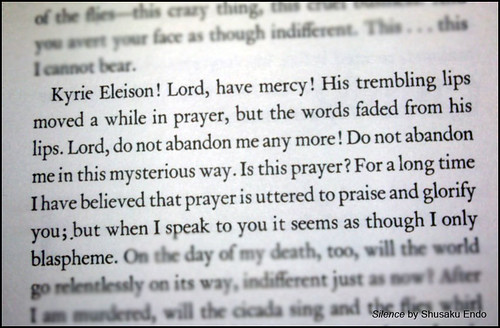 God's silence was something I knew all too well. Like Rodrigues, I was accustomed to "hearing" God's voice, to daily communion with him.  But then the veil of silence fell.  I wanted to read this book for encouragement.  Surely a Christian writer would end with an uplifting answer - surely God's silence would break eventually and truth would prevail!

Yet page after page, the text came alive in words that described my every cry.  Why, God, are you so silent?  In the face of so much pain and need, how can you be silent? When I need you so much, when the world needs you so much, you remain silent, arms folded, unconcerned.  The silence of the black sea described in the book as comparison to the silence of God was an image I understood all too well.

I hoped the book would bring me some encouragement.  After all, for Rodrigues, Christ does eventually break his silence.  But even as the character was mildly bolstered by this, I felt it was too little too late - for the character and for me.  Even if such a silence for me could be broken this way, it would never be enough. The silence of God led both me and the characters in the book to question the existence of God, but while Rodrigues, and to a similar extent, the author himself who was no stranger to the subject of God's silence and persecution, found acceptance, I followed Ferreira in concluding that God is silent because God does not care. (It would take another year or so to conclude that God is silent because he does not exist.) 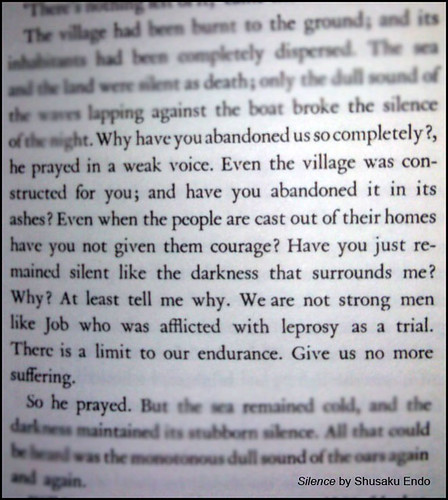 Beyond the way this book spoke to me personally, it was also a simply incredible story.  I have just finished re-reading it, and it stabbed me in my heart in all the same places as before, bringing tears to my eyes at multiple times.  The actual historical foundation for the plot also touched me; these people really existed, these peasants were actually oppressed in these ways, the faithful were actually tortured and killed in these ways. And as for the moral dilemma, I again, just as last time, caught myself asking, "Would I apostatize?" with at times yes, at times no, the answer on my lips. If ever there was a spiritual and moral dilemma to face, it was the dilemma this priest faced between denying his Lord and saving the lives of innocent peasants. (If you think that answer is a no-brainer, you definitely must read this book.)

My only word of caution - if you are already plagued with doubts about your faith, consider carefully if you really want to read this book; it may change your life too. For those of you who are confident already in your faith, then I definitely recommend reading it. Perhaps it will strengthen your faith, as it did Philip Yancey and so many others. We read this book in an online book club after I finished reading it, but unfortunately I never got the chance to really discuss it with the others in the club, as it was too close to my moving date.

(I'd love to hear now what others got out of if - Judith, Cheryl! - who were not going through the same crisis of faith as me!) 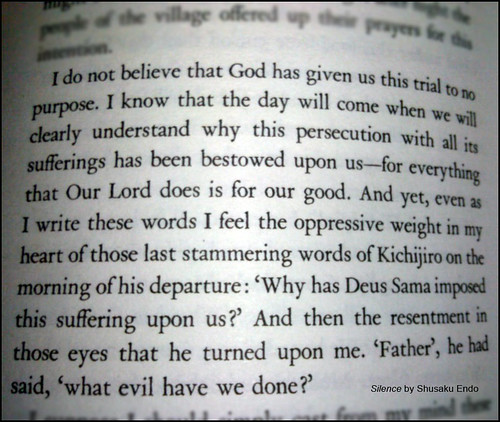