This post will never go viral. It will never get 2,025 page views like my Frobscottle recipe (which I didn't even invent). No one cares this much about this book and there has probably ever only been like one party in the past based on it and there will probably be only ever one or two more in the future. But regardless, I'm posting my Book Club themed cocktail, snacks and decorations from our last book, The Chrysalids by John Wyndham for, you know, those one or two future parties looking for ideas.

It was my first time to host, and while I will never be able to host as magnificently as Kate hosts, I wanted to do something a little more special than just mopping my kitchen floors and wiping down toilets. (You're welcome.) Then I found this inspiring cross-stitch on Etsy and an idea was born. 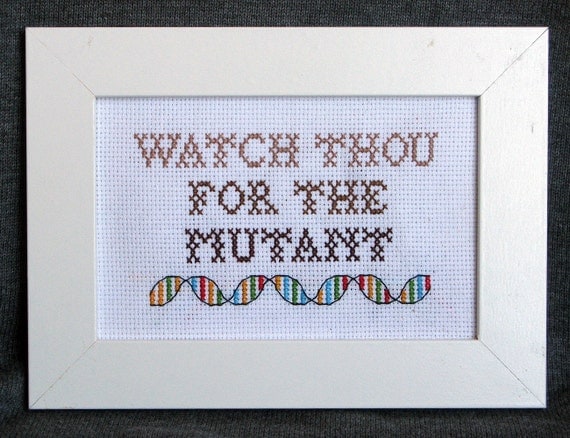 Which I did not buy. But I did decide it looked easy enough for me to attempt, so I did.


In the book, our protagonist, David Strorm, lives in a house decorated adorned with signs everywhere of verses from Nicholson's Repentances, the book the Labrador people used alongside the Bible as Scripture. Verses such as the one above - WATCH THOU FOR THE MUTANT - warned people that all deviations, no matter how small, were still blasphemies against God and were not human. An extra toe or unusual body hair is all it took to prove you were a child of the Devil and nonhuman and were to be thrust out of society and rendered infertile so as not to procreate. If you were a baby, you'd be left near the Fringes and left to your own devices. Maybe a Fringes person would rescue you; maybe not.

It's a really uplifting book.

So the only real way to decorate was with these signs. (I did toy with the idea of sewing brown crosses on fronts of every woman's shirt as she walked through the door, but the logistics....) I printed off eight different signs and framed them with Dollar Tree frames, and hung them around the house, along with my cross-stitching and all my chalkboards with verses scrawled on them. 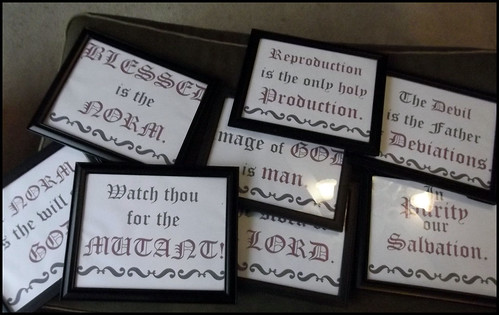 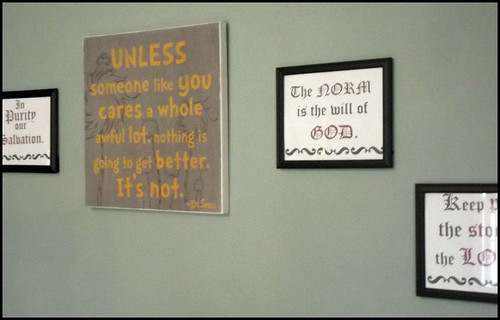 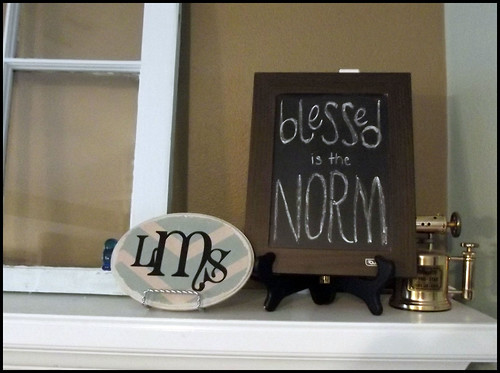 We also sort of had a theme for foods - foods that were a little "deviant" or a something not quite right. Like Elizabeth's maple bacon cookies....

I wanted to try this blue Muddy Buddies recipe that I found on Pinterest, because blue food just isn't right. I think I can go so far as to say, however, it was a definite Pinterest fail. Or perhaps the whole thing is just a massive Photoshop pantone conspiracy, because there was no way this could have turned out as blue as the recipe made it look. I was going to call this "Deep Blue Sea-landers" after the Sealand people, but since it didn't turn out very deep blue, I just didn't name it at all.

It tasted good though.

Yet my crowning personal achievement of the evening, in my own ever-so-humble opinion, was my very own cocktail created just for the party called The Badlands (somewhat based on this lemon licorice cocktail recipe). And this is the part that will never go viral because no one will ever care about an obscure cocktail inspired by a random reference in a semi-known science fiction novel from the 1950s.

The cocktail was super tasty though, and I'm pretty sure everyone enjoyed them, along with all the other delicious foods and drinks the ladies brought over (jello shots, anyone?), and we also enjoyed a good chinwag about the book itself. Ya'll, this a book club that actually talks about the books. I love it.

So here's how to concoct The Badlands. You could make it for any occasion in which a black drink would be appropriate. (Halloween? Funeral?) 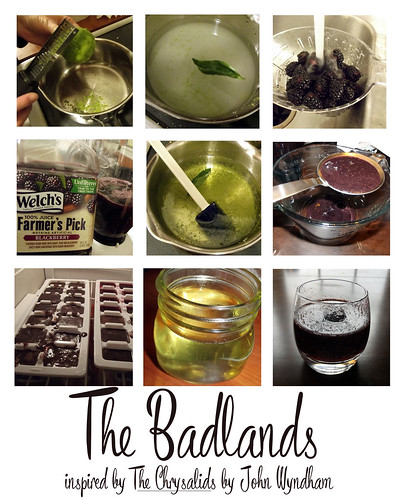 There are three parts to this recipe. Two of which need to be made in advance.

The Badlands
A Black Gin Cocktail


Blackberry Ice Cubes
6 oz fresh blackberries
1/2 cup of sugar and 1 cup of water OR
1 cup blackberry juice
black food coloring (optional)
Basil-Lime Syrup
2 limes
2 cups sugar
2 cups water
1 basil leaf
Cocktail
4 oz gin (I recommend Bombay Sapphire but any will do)
2 oz of Basil-Lime Syrup
2 tsp fresh lime juice
2 Blackberry Ice Cubes
Tonic water
Start with the Blackberry Ice Cubes, since obviously these need the longest prep time to freeze. Puree blackberries and sugar/water or blackberry juice in a blender. If you are trying to make it more black than reddish-purple, include black food coloring. After blending, strain out seeds with a strainer. (This took a lot longer than I expected, because there were a LOT of seeds. It's an important step though, because you don't want seeds to ruin your drinking experience.) Spoon strained blackberry juice into ice cube trays and freeze.

(You could avoid this step by using just plain blackberry juice frozen into cubes, and I'm sure it would still be very tasty.)

Next, make your Basil-Lime Syrup. Peel or zest just the green off the skin of the limes, leaving the bitter white pith underneath. (If you don't have a zester, I highly recommend getting one - they make such a difference to so many recipes! And hey, you can even buy one from me!) Set limes aside. Combine zest or peels with sugar, water and basil leaf in a small saucepan and heat until sugar is dissolved. Remove from heat, and once cool, strain the syrup. In a separate bowl or cup, juice your two limes. Chill both the syrup and the lime juice separately in refrigerator for later.

Once ice cubes are frozen, you can make your cocktail!

In cocktail shaker, gently shake gin, syrup, lime juice and 2 berry cubes. Pour into two glasses, giving each glass one of the half-melted cubes left in the cocktail shaker and complete drink with a splash of tonic water. (Tonic water will supposedly glow under a black light because of the quinine, but with all the berry juice in this drink, I'm not sure if this drink will glow or not. But legend does say that sometimes the black coasts of the Badlands glowed dimly in the dark....) Drink and enjoy, while thinking of all the poor Old People who were destroyed in the Tribulation, leaving nothing but large continents of wildly mutated vegetation surrounded by black, glassy, radioactive coasts in their place. Ahh, sucks to be them. 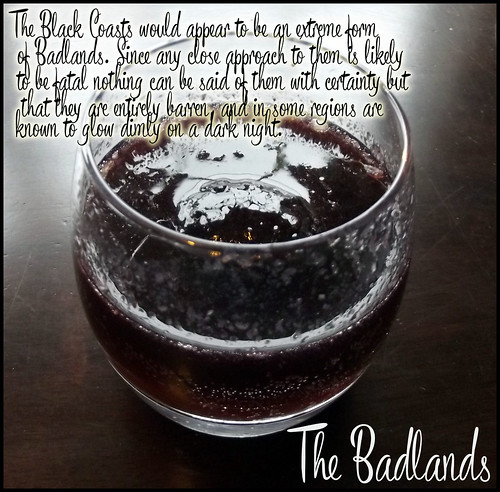 Next month, we're reading The Immortal Life of Henrietta Lacks.  HeLa Cells on the rocks, anyone?
Posted by Lori Arnold at 2:49 PM
Email ThisBlogThis!Share to TwitterShare to FacebookShare to Pinterest
Labels: books, food, friends, parties, recipes