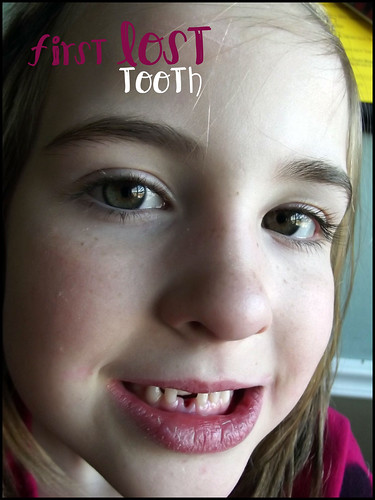 We've never really done the Santa thing on the kids; we let them sort of believe in him during the Christmas season, but I've always been clear during the year that he was pretend (much to Scott's chagrin). The same with the Easter Bunny and Banoffee Pie, our Elf on the Shelf.

But the tooth fairy, she was kind of different. She and the pajama fairy and all other fairies seemed to be treated with more respect, more believability.  When the kids asked if fairies were real, instead of giving them the brutally honest "No, but it's fun to pretend!" line I gave when asked about Santa, I tended to give more vague - though not quite dishonest - answers. "What do you think?" or "Hmm, I don't know..."

So the tooth fairy kind of stuck.

Our tooth fairy leaves a little tiny note on special stationery (kept tucked out of sight in my underwear drawer) with every tooth. She tells the child what the fairies plan to do with her tooth; seems Fairy Land is always in the middle of some major renovation project - a new Fairy Town Hall, the fairymentary school, the fairiatrics wing of the hospital, a fairy brick road.

Fifi has lost all the baby teeth she will lose for a while, but Lolly has been not-so-patiently waiting for her first one to come out. Finally, a couple of weeks ago, it got wobbly. We all got very excited for her, and Fifi exclaimed, "You'll get a visit from the tooth fairy! You'll get a dollar!" We all cheered.

"But you know," Lolly began, with a sly grin on her face. "The tooth fairy isn't really real."

I slyly grinned back. "Oh really?"

She shook her head, then considered for a moment.

"Since I know the tooth fairy isn't real, can I get TWO dollars?"

I'm not sure if she's cut out for business or politics. Or both.

Well, since then, she's been wiggling it constantly. Then today, after school, I gave it a little push to see how close to ready it was, and out the little toothie came!

Regardless of whether she believes in the tooth fairy or not, she is still getting a little tiny note on special stationery in place of her little tooth which we've set up in front of her fairy door (because a tooth under a pillow is just asking for a lost tooth and a woken child), but instead of a coin or a dollar bill....

She's getting a check.

"The tooth fairy" doesn't have any cash on her.


I'm pretty sure a withdrawal slip, a simple explanatory note and my bank card tucked into the capsule along with Lolly's check at the drive-through lane of the bank will be sufficient for clearing this check.  She will, of course, still need to endorse the back. 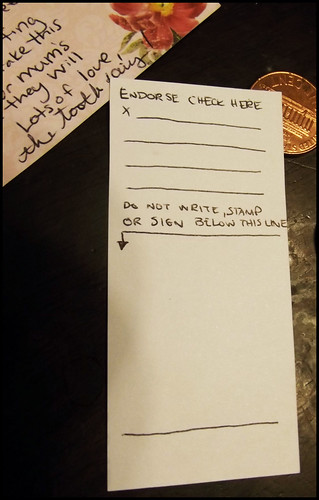