Depression Is Not A Sin (So Why Do I Still Treat It Like One?) 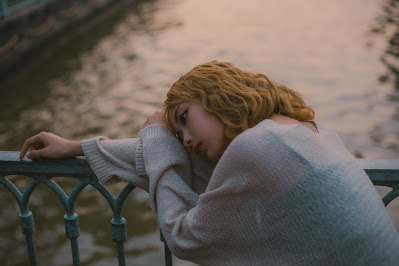 [Image by Hieu Van from Pixabay]
When I was a young teen, maybe a preteen, I mentioned to my dad that I thought I might be depressed. This was my non-confrontational way of letting my parents know I was struggling. My dad replied in his usual dismissive and adultlike condescending way that "Christians can't be depressed. If you have God, what do you have to be depressed about?"

To understand the effect this off-handed yet reprimanding remark had on me, you have to understand how seriously I took my faith in God from as far back as toddlerhood. Being a Christian was the most important aspect of my being. Pleasing God and striving for righteous perfection was my deepest desire. (Even now, I feel the obligation to add the disclaimer that while it was my deepest desire, I was so imperfect at it at the same time. I can't even talk about my sincere faith without reminding myself how imperfect I was, lest I forget.) So to discover that my depression was yet another sign that I was failing God and failing as a Christian was a blow that struck deep and hard.

I must have been around 13 or 14 when this exchange occurred. I had been feeling depressed for a while and my suicidal thoughts were starting to drift into suicidal considerations. Not quite "plans" but more than ideation. I felt bottomless, endless, hopeless. I didn't know who to talk to so I gathered up my courage to broach the subject with the person I believed had more wisdom and righteousness than anyone else I knew.

In that moment of vulnerability he confirmed one of my deepest fears - that I did not love God enough, and that was why I was depressed. Worse, my being depressed was in itself a sin. The word "depression" became synonymous with both sin and the wages of sin. A never-ending cyclone, and the only exit was "obey God more".

So I internally replaced depression with guilt.

Depression is a lonely prison in the human experience. Whether you are surrounded by the physical presence of a dozen other humans or isolated from all other sentient beings doesn't really matter. You are trapped inside yourself by locks with no keys. There are either no windows, or there are bars on the windows six feet above you. Or perhaps it's like being buried alive, and the harder you try to claw your way up, the deeper you dig your grave. Eventually you give up trying and find yourself lying curled up in the dirt, exhausted and listless. Your eyes glaze over. Your muscles are tense but weak. Your body is there and not there at the same time. You feel everything and you feel nothing.

There could be friends and family reaching down to help you up or you could be in utter isolation. Either way, you feel the same. Alone. Powerless. Dead inside yet crawling with maggots of feelings. Mildewed, like your insides are a damp rag shut inside a box, spores bursting into mold and caking every inch of surface, no extra oxygen needed for decomposing.

Not everyone experiences depression the same way, of course. The scenery, the lighting, the make-up, and the characters are all performing a similar play but with different directors. Passive directors, oftentimes, who have in some way lost control of the show, powerless to direct our own lives.

My play's theme is saturated with religious guilt and external condemnation (possibly perceived, most often real). It is heavy on self-blame, self-isolation, and self-punishment. I dress it up for my audience with self-deprecating jokes, a pretense of coping, and over-compensating perfectionism. I learned from religion that the best Christians are humble and meek, honest about their imperfections, but ever striving to finish the race. If you are down, it's okay to talk about being down, as long as it is couched in a story of perfect grace, of a savior who will lift you from the depths and restore your joy. To "wallow" in it though, or talk incessantly about it, will only dampen your witness, so keep the real shit to yourself.

It took me nearly 20 years to shed the fallacy that depression is a sin and something to be ashamed of. But a few things from that brief conversation with my father have never left me:

1) I still equate depression with guilt. I look at all the things I did to bring this on myself. I look at all my failures, all my mistakes, all the steps I took to get myself into this mess and spend all of my time berating and hating myself for them. I then look at how my miserable self is affecting others negatively, particularly my children and my relationships, and I heap the guilt on over that. I blame myself for not being able to "get a grip and get on with it." I punish myself as a means of reformation. I dare not "spare the rod" of discipline against myself, because that's exactly how evil people become more evil. This is what Christianity taught me. To achieve salvation, you must be purified by fire. You must destroy all the evil inside of you at whatever cost. If that "evil" manifests itself as depression, then destroy the depression by destroying all the parts of you that suck. Leave nothing but perfection behind. Blame nothing on anyone or anything else; the blame is solely yours and the worse you feel about it, the better you'll be in the end. If I am depressed, it's because I deserve to be.

2) I still experience depression as a deficiency. I don't believe depression is a deficiency in anyone else, just in me. I will speak up loudly against the stigma surrounding depression in regards to everyone else, but when it gets to me personally, I only share the talking points, the management-approved topics. To go into depth about what I am personally experiencing would be an overshare and a nuisance. I try to avoid being a burden on anyone, especially if I can't give them anything back in return. I learned from early on that love (or in this case support) is transactional, and unless you can pay up right away or at least promise to pay it back later on, you don't ask for it.

I learned this about love because that's how salvation works. Salvation, like love, is freely given on the outset, but it requires a sacrifice of your entire life to accept. Just like Jesus had to give his entire life for us, we must in return give our entire lives to him to attain the forgiveness offered by the cross. If we can't give everything, we might as well give nothing. So if I can't promise that I'll be able to give the same level of support back to those who have supported me, then I won't ask for it in the first place. If I feel I'm more of a drag on someone than a support, then I won't lean on them. I won't put my yoke around their necks. I'll carry my burdens completely alone to avoid placing them on anyone else. Depression is my deficiency, not theirs. I don't even share everything with my therapist because I'm too embarrassed and ashamed of my defects.

3) I do not expect family to be my support system. As I said before, I believed "good Christians" were allowed to experience a version of depression as long as it didn't last too long and didn't bring anyone else down with it. Christians can receive support from other Christians, which often involves prayer and Scripture verses, and sometimes (when it's starting to get really bad) a good old-fashioned  kick-in-the-backside tough love. But when you are no longer a Christian... well, that is a horse of a different color.

When I was an evangelical Christian, I believed that non-Christians (or even those liberal Christians) felt depressed because of the God-shaped hole in their lives. Of course they were depressed! Without God, what did they expect? Joy?! Please. If they would just change their lives and live the way God intended for them to live, they'd be on a much happier path. My support often looked more like evangelism than love. So it's no surprise this is the mentality I expect from my family. This and the words my dad said to me all those years ago. If I'm depressed, it's because I don't love God enough.

I don't believe in God any more, but my family does. Even if I did feel comfortable enough to reach out to someone for support, knowing I may not be able to give it back in full, I would not expect that person to be a family member. They would only see me as a lost soul, someone struggling with depression because of my own poor choices and lack of faith. I already blame myself enough, I already see my inability to cope with life as a deficiency; I don't need those false narratives repeated back to me. I need someone to tell me that I'm not at fault, I'm not the cause of all the pain and suffering around me, I'm not weak, and I'm not inherently bad. But I learned long ago that those words will never come from the mouths of fundamentalist Christians. The only support and love they know, they learned from the same source I did. They only know it as evangelism. They only know it in context of God's example of love "freely given" at an unpayable price.

So where does that leave me? It leaves me here, right now, in my pajama pants and sweatshirt, trying to keep my job, my home, my children, my relationships, my finances, and my public-facing image out of the six-feet-deep prison that I am lying in. Sharing just a little more than my management-approved talking points with nobody and everybody at the same time. Resisting the urge to end this with my pre-programmed note of hope and everything-is-going-to-be-okay (what I call the Christian finish). Because I don't know if everything is going to be okay. I really don't think it will be. I will keep going because I have to, but not because I'm strong or hopeful. I will keep going only because too much depends on me.

Posted by Lori Arnold at 2:38 PM
Email ThisBlogThis!Share to TwitterShare to FacebookShare to Pinterest