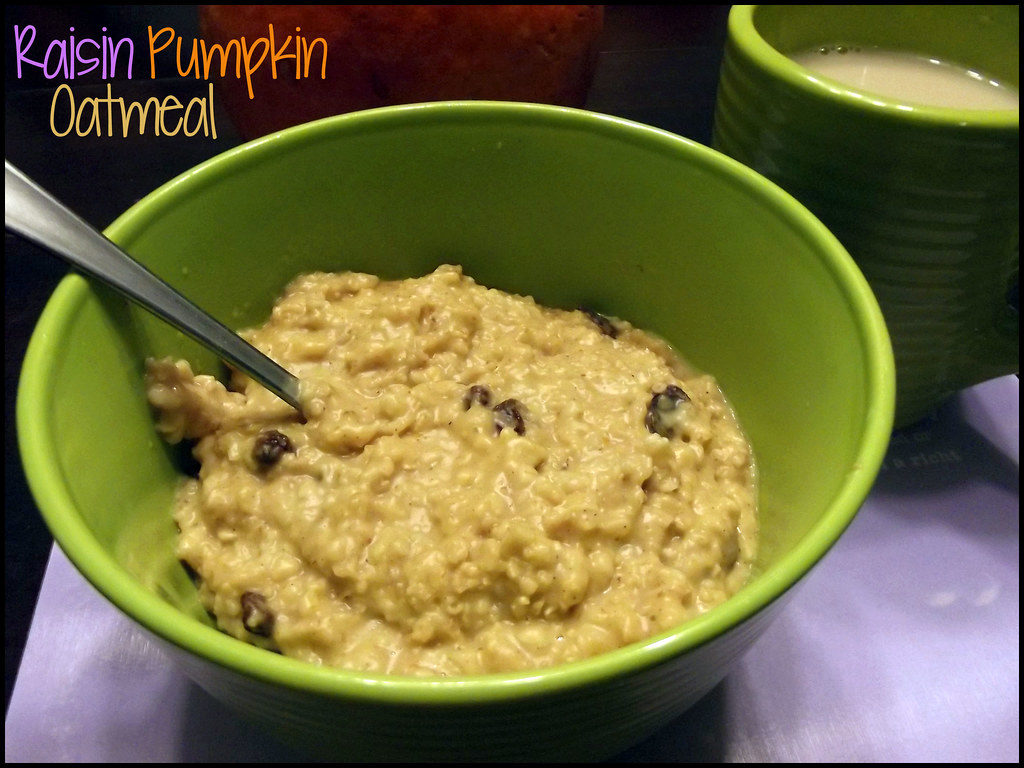 Scott isn't liking all these non-keto recipes I've been making this week! I usually make this recipe in the Crockpot overnight. I'd put the oats, milk, water, pumpkin*, sugar, spice and raisins in the Crockpot, then set it up with a timer to turn on Low about three hours before wake-up time. Because my current Crockpot is digital, the timer thing won't work properly, because when the power turns on, it wants you to set the time and temperature before it starts cooking. So for this pumpkin oatmeal breakfast, I actually went and bought a new Crockpot with a dial, so I could set this up a timer to have ready for this morning.

(Well, this is the first time to include pumpkin.)

Then last night I decided to clean out my closet and forgot all about it. So oatmeal this morning was made on the stove.

Add all the ingredients except the butter to a pot and cook over medium heat for about ten minutes or until oats are cooked, stirring occasionally. If it's not sweet enough, you can add more sugar; we just don't like super sweet things, especially in the morning. The sugar and the raisins take it just about over my breakfast sweetness quotient already. After the oats are cooked, add the butter and stir. My kids like it served with a dollop of honey in their bowl to mix in; that to me is too sweet, but they like it. You could also try a dollop of caramel sauce or maple syrup if you're so inclined.

This recipe makes the perfect oatmeal consistency, in my opinion. I like my oatmeal creamy, smooth and thick but not clumpy. I certainly don't like it watery. Four cups of liquid may sound like a lot, but I think of it like rice - 1 part grain to 2 parts liquid. If I used any less liquid, it would be too thick for me. In fact, I would probably add an extra 1/2 cup water next time since the pumpkin seemed to thicken it a bit more than usual. If you prefer thicker oatmeal (or thinner) just adjust the water levels. The kids this morning weren't happy when I told them we were having pumpkin oatmeal (instead of normal oatmeal), but when they tried it, they didn't even believe there was pumpkin in it. The spice is the only thing that gave it away, and actually, it would've been delicious without the spice too. I'm wondering now what other vegetables I could hide in oatmeal - broccoli? Okra?

Okay maybe not.
Posted by Lori Arnold at 7:09 AM
Email ThisBlogThis!Share to TwitterShare to FacebookShare to Pinterest
Labels: food, keto, pumpkinpalooza, recipes