Except there is no pease because ew with the pumpkin. 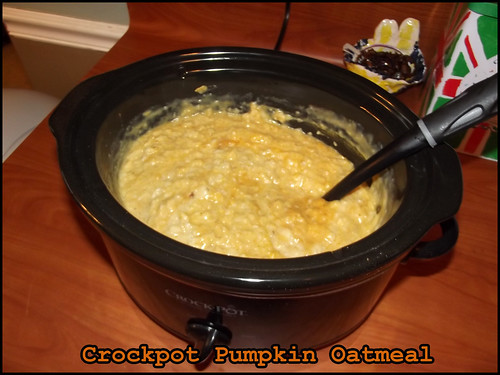 Yesterday I repeated a recipe somewhat from earlier this month; I made pumpkin oatmeal again. Only this time I remembered to put it in the Crockpot the night before. And the recipe was ever so slightly different from the Raisin Pumpkin Oatmeal. Basically no raisins and in a Crockpot.

I put all of the ingredients minus the butter in the Crockpot the night before. I set it up to a timer to turn on High at 4am. It cooked on High from 4 to 6:30am when we woke up. It was perfect. A little stir and it was the PERFECT consistency. I put a little tab of butter in each bowl and didn't need to sweeten it at all. We all loved it. It fed all five of us and then some. I love warm, delicious-smelling oatmeal waking me up in the morning! 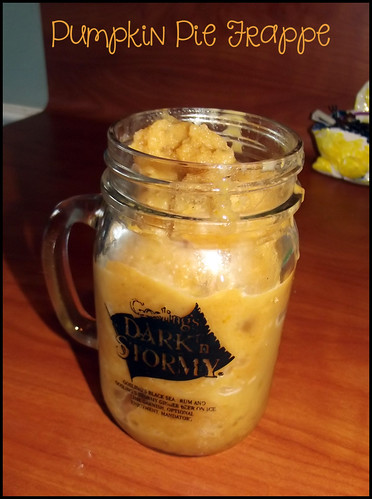 Tuesday I made a Pumpkin Pie Frappe using this recipe from Peanut Butter & Peppers. I made the coffee version. This one takes a little pre-planning; you need to have some frozen coffee waiting. I realized after making this that this is the perfect way to not waste leftover coffee - freeze it! I always make half a pot yet only drink one or two cups, leaving some to get poured down the sink later after it's cold. Now I will put it in ice trays for making frappes later.

This was really, really tasty. Just please pay attention to the fact that the recipe calls for coconut milk IN A CARTON, not the kind in a can. Canned coconut milk is for cooking, not for drinking.

Though you can get the recipe from the link, I'm posting it here using my own measurements, since I made a few slight changes. 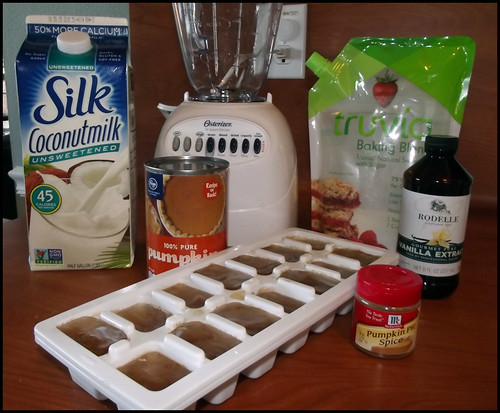 Put all ingredients in blender and blend until smooth. If desired, top with whipped cream and a dash of cinnamon. I didn't have any whipped cream or else I'd have tried that.

Okay notes:
* Definitely make sure your frozen coffee is partially thawed. I set mine out for, like, five minutes, and thought it was "thawed" enough. It wasn't. The blender couldn't break it up and at one point it actually shot a huge piece of ice (with frappe all over it) right into my eye! It pretty much hurt. And yes, the lid was on. I turned off the blender, opened it up to stir the ice that had gotten trapped and inertia or something caused the ice cube to shoot out of the blender and attempt to blind me. Damn physics. So yeah, partially thaw first.

Also, next time I'll just put in all the ice cubes. I was afraid it would be too strong with so much coffee, but I think it would've been fine.

** The original recipe has the measurements for Stevia. Stevia and Truvia are not the same so I had to do some math to figure out the Truvia amount (which is what I had). 1 teaspoon of Stevia is equal to 1 cup of sugar, and 1 cup of sugar is equal to 1 1/2 teaspoons of Truvia. I only put 1 1/4 tsp in my frappe and it wasn't quite sweet enough, so I'd recommend using the full 1 1/2 teaspoons, unless you prefer things not very sweet.

This was really good. I will definitely make it again. I've got frozen coffee in trays right now! And I think I'll get some whipped cream for next time too.

Oh, and don't like the idea of opening an entire can of pumpkin just to take out 2 tablespoons? Well, if none of these other recipes can inspire you, use the rest of the pumpkin in cornbread or dump it in a chili.

Erm, no, gross, but warm in a mini muffin pan? Sure! 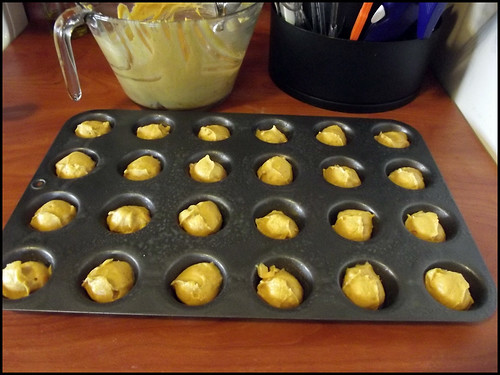 This recipe from A Beautiful Mess for Sour Cream Pumpkin Muffins was yet another recipe sent to me on Facebook. I'm amazed at how so many recipes including pumpkin have been so good! These are super light and fluffy, not in the least bit dense or rich. They have a slight Fall taste to them due to the cinnamon and nutmeg, but it's not overpowering. I chose to make these in my Mini Muffin Pan, mainly just because I don't get enough opportunities to use my Mini Muffin Pan, so the only thing that really changed with this recipe was the baking time. I thought these being small would mean I'd eat less of them, but it actually just means I pop one in my mouth every time I walk into the kitchen. I must put them away. After I eat one more. Maybe two. 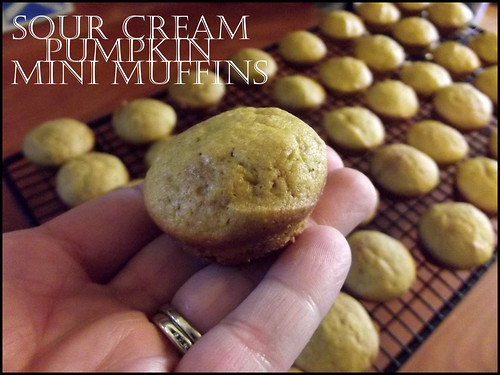 I did everything according to the recipe except decrease the baking time to about 15 minutes, so I'm not going to recopy the recipe. Just look it up here. These would be delicious for breakfast (especially full sized), maybe with some walnuts or blueberries tossed in? Mmm, I might have to do this recipe again and experiment with extras. Apple bits, banana, strawberry, gosh ANYTHING would taste good in these! 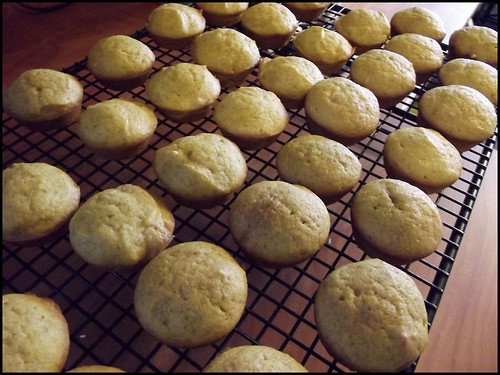 Honestly. All three of these recipes: Go and make them.