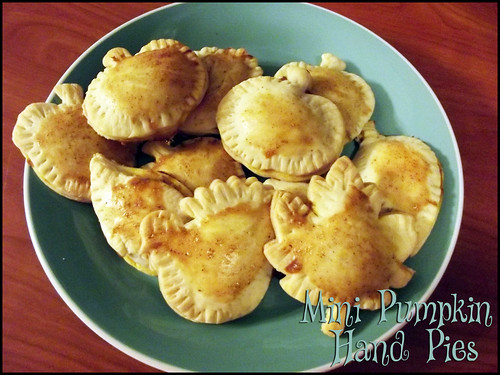 I didn't make anything yesterday, because I have officially run out of pumpkin. Ten cans lasted me a good while, though. Now that I've experimented so fully with pumpkin, I am going to choose my favorite recipes for taking to my various Thanksgiving dinners. I will make a traditional pumpkin pie one day (because you just have to), the Pumpkin Chocolate Cheesecake Bars for another and Pumpkin danishes for breakfast on another. Today - if I get around to buying more pumpkin today - I'm going to try one last recipe I was sent to try. But before I get to that...

(Why they are called Hand Pies, I don't know. I guess because you sort of use your hands to seal them?)

I used this recipe shared by Sugar and Charm on tablespoon.com, linked to me by my sister-in-law. (Phew! That was a lot of links.)

Rather than use round biscuit cutters, though, I used some cheap Thanksgiving cookie cutters I got for 69¢ at the Dollar General. Acorns, leaves, turkeys and pumpkins. So cute! 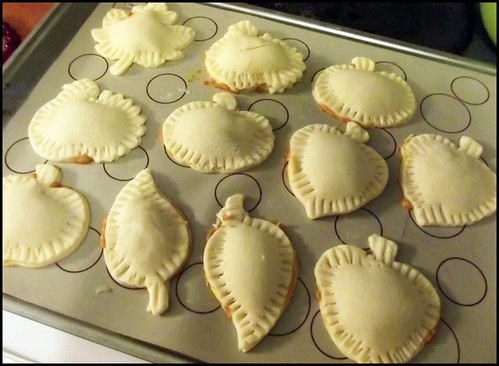 I won't copy the recipe here since it's all there in the link (and I always feel like I'm plagiarizing if I copy a recipe), but they were really easy to make. Just cut shapes out of chilled uncooked pie crust, fill with a small spoonful of filling (pumpkin purree, sugar, cinnamon, nutmeg and heavy cream - see the recipe) and seal with a fork. Don't overfill them, though, because they will ooze out the edges while you're sealing. Mix up some egg with cinnamon and sugar for the glaze before baking.

Fifi, who normally loves pumpkin pie, didn't like them. Lolly, who doesn't like pumpkin pie to start with, helped me make these. I think Fifi didn't like that they had too much crust and not enough pumpkin. But I liked them, and so did all the other adults I shared them with. So oh well. Fun to make with kids, maybe not fun for kids to eat. Maybe mine are just picky.

I settled down after bedtime with one of these on Monday night, a dollop of pumpkin pie whipped cream and a pumpkin pie spice coffee. Mmmm. Autumny. 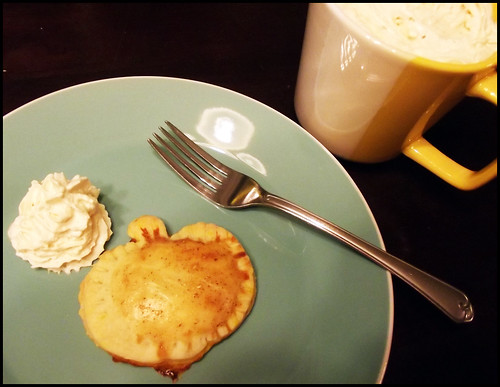 Posted by Lori Arnold at 11:37 AM
Email ThisBlogThis!Share to TwitterShare to FacebookShare to Pinterest
Labels: baking, food, pumpkinpalooza, recipes