Just a quick one tonight. I have had a severe headache since 1pm, and I just don't want to think too much (or look at a computer screen too long).

So I missed posting my outfit yesterday, but you didn't miss much. I woke up yesterday morning completely uninspired by the dress so I just layered over it. It was a relatively cool day for it, so I got away with it. 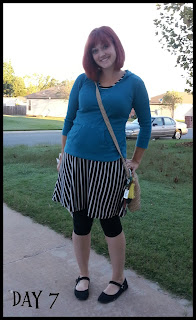 I wore The Dress with a pair of black capri leggings underneath and those same black flats as always.  Walking to school each day really puts the nix on wearing my fancy shoes.  Over the dress I wore a turquoise three-quarter sleeved hoodie. So stylish....

I had a Pampered Chef party last night, so I had to spruce the outfit up a bit for that. I took off the leggings and the hoodie, wore some brown flats instead and put on a wide red belt. I didn't get a photo of it, but that's okay, because I'll be repeating that outfit soon. Probably tomorrow for my next Pampered Chef party. 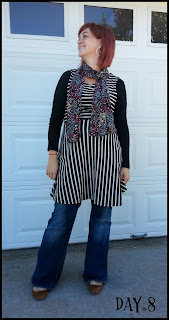 Today I searched and searched for my full length black leggings, since it was to be cooler still but couldn't find them. (I eventually found them folded up underneath some papers on my table.) So I wore jeans under the dress, and a long sleeved black shirt under the top.  For the earlier half of the day I wore the dress tucked in like a top but got tired of re-tucking it in after every breastfeed - Jaguar was kind of needy today - so I went the rest of the day with it out.  I finished the outfit with a soft, flowy, black flowery scarf. And brown flats instead of black. 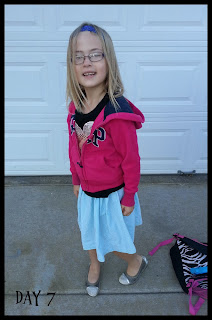 Fifi has been doing great with Her Dress.  Yesterday she wore it as a skirt, paired with a cute black t-shirt with a big metallic heart on the front, and her silver sparkly slip-on shoes.  It was cool, so she also wore her pink Gap fleece. She wanted to wear her hair down, but since she decided a few weeks ago to CUT HER OWN BANGS, I pushed her uneven wisps back with a blue headband. 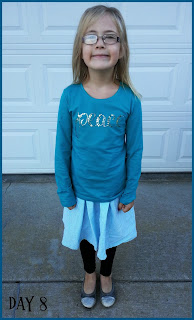 Today, so looked stylish as ever in Her Dress with her new turquoise long-sleeved t-shirt with the word 'peace' scrawled across the front in sequins.  She wore black leggings and the silver sparkly slip-ons again. Her bangs don't look so bad today, since they naturally swooped to one side this morning. (To be fair, they actually don't look bad at all. It's probably only noticeable to me.)

And that's us caught up. I'm now going to get a tall drink of water and 'hit the hay'.  I'm so tired.

I'll do my best to get some good blog-chat going in the next few posts. Believe me, my head is spinning with thoughts important enough to jot down but finding the time and the energy..... That's altogether different.
Posted by Lori Arnold at 9:52 PM
Email ThisBlogThis!Share to TwitterShare to FacebookShare to Pinterest
Labels: challenges, October Dress Project, projects