Wondering where we've been the past week? (You're like, 'Uh, no...') Well, we've been away up north in the Cairngorm mountains enjoying a lovely wee holiday, just Scott, Jaguar and myself, while our sweet daughters are in Portugal with their wonderful grandparents. 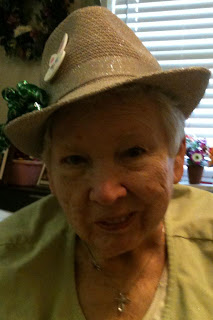 While we had a great holiday, and I'll talk about that later, we had some sad news while we were there. My grandma, my 'Mamaw', passed away on Thursday early morning. We've been expecting it for a while, so it wasn't a shock, but it was still very sad for me. Being away from 'home' (even though Scotland is also 'home') is really hard in times like these.

My mom asked me to write a poem for the funeral. For me, poetry is such a visceral and peculiar thing; I write in a certain way, with the words seeming to bubble up out of my very guts, and I employ heavy imagery and abrupt line breaks and usually end up with pretty bleak unexpected outcomes. None of these were terribly appropriate for writing a poem for a funeral.

And considering I had only one afternoon in which to do it, and no computer with me, the task was an immense one.

I sat down with a pad of children's colouring paper, the only paper I could find in the house we were staying in, and a pencil with no eraser, and started jotting down ideas. I haven't handwritten anything longer than a message in a card in years, and besides that, I didn't know what to say or how to say it succinctly enough for its purpose.

I also wanted it to have poetic merit. I am a writer and don't like to put my name to anything I'm not proud of.

Finally, after agonising for hours, after three front and back sheets of paper covered in one liners, quatrains, scribbles and glib phrases, I was ready to give up.

An English sonnet (or Shakespearean sonnet) is 14 lines, consisting of three quatrains and a couplet, with a rhyme scheme of abab cdcd efef gg. Generally speaking, the first two quatrains will have one focus, then the focus shifts for the second half, with the couplet often 'summing up' the sonnet.

Here is Mamaw's Sonnet. It's not book-worthy or a competition winner; it's not lofty or mind-blowing; it's not even a perfect sonnet (some lines aren't exact iambic pentameter, many of the rhyming words are only slant rhymes). It's just about my mamaw, it's just a simple poem written in her memory.

Goodbye, Mamaw. I hope you were able to hear it in heaven.

Mamaw's Sonnet
When we parted last, it was with tears -
We both knew it would be our last goodbye.
So frail, so thin, worn out with many years,
She couldn't speak, but still she fought to try.
And yet when I remember her tomorrow
Fond memories of her will make me smile.
So rather than goodbyes and tearful sorrow--
The things I loved about her, as a child:
Mamaw making pickles and sewing drapes,
The nights of Lawrence Welk on PBS.
She made me learn to cook and how to bake
But I liked playing dominoes the best!
It's memories like these I wish to hold
For bodies age but love does not grow old.