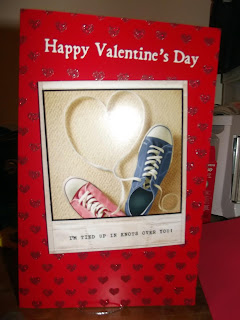 That's coming up for a decade of being the same person's Valentine year in, year out.

It's a strange but wonderful thought.

My memories of unmarried Valentine's Days are few. I had lots of boyfriends in my day but never seemed to have one on Valentine's Day. Scott tells me this is intentional on boyfriends' parts, so they don't have to buy a gift. I believe it. I remember one year, a guy from school, Matt Yeager, brought a bucketful of red roses and gave a single rose to every girl he knew. He was always such a romantic; I don't know whatever happened to him, but I hope he's married to some girl who simply adores and appreciates his romantic side - and pays it back.

My first Valentine's with Scott consisted of him sending me a bouquet of roses from Scotland, in a turquoise vase, which I kept ever since, until about a year ago when my darling beloved child broke it. It had a green Irish teddy bear with it; InterFlora must have assumed Ireland/Scotland/same thing.

My second Valentine's was here with Scott in our first home, our first married Valentine's together, and he made me a fancy, romantic dinner. I'll never forget - steaks, mashed potatoes with the skins and asparagus drizzled in lemon butter.

My third Valentine's with Scott was a Bombay Sapphire cocktail-making class in Glasgow, where we learned to make fancy gin cocktails, and where we developed a cocktail snobbery. Cosmopolitan without the flaming orange? Not a Cosmopolitan.

And that... is where I begin to forget. 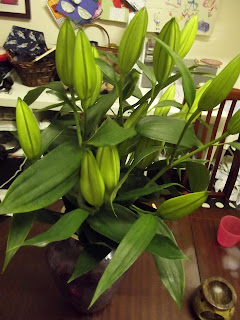 Kids came along that year. Fifi would have been less than a month old that year, and every year after that is just a blur. I know Scott has brought me home Oriental lilies just about every year, a major sacrifice for him with his allergies, but in general, I can't remember what we've done on this favourite of holidays for the past six years. We tried to do a back-and-forth thing, where we take turns planning our Valentine's dates, but each year, for the past several years, we can't remember who's turn it is.

I've been thinking today though. Valentine's has always been one of my favourite holidays. I love all the gushy mushy stuff, I love red roses and my Oriental lilies, I love chocolate-covered strawberries and jewellery and romance. But at this stage in our lives, with children and trying to make ends meet and housework and busy schedules, romance gets sort of the back seat... and not the good kind of back seat. I miss doing all that lovey-dovey Valentines stuff that couples - especially dating couples - put so much effort into.

It's true that Scott and I agreed to save our Valentine's date for next week when the children are away with grandparents, and we can have a nice, relaxing week away ourselves. I'm not suggesting that Scott and I have blown it this year. But I am thinking that next year, I'm going to kick the whole Valentine's thing back up a notch. I've seen so many sweet ideas on blogs, Pinterest and Facebook that I wish I had thought of doing, to show my man how much I still fancy him, how attractive he still is to me, how deeply I love him, and how much I enjoy spending time with him. I want him to know that, despite the season of life we are in, he still makes me giggly and happy, and I still love the socks off him... and the shirt, and well, everything else. *Wink.

I'm looking forward to next week, when we'll have the chance to get away for almost a whole week with just the baby - no other kids, no internet, no housework, just me and him (and hopefully a baby who just sleeps a lot), some books, some TV, some good conversation, some lovely walks, a cosy fire, a few leisurely outings, and a romantic dinner or two. Because I still love my Valentine, nine years later, more than I loved him on that very first, or even second, when the fire burned so brightly... but as we've learned, the brightest fire isn't always the hottest, and it isn't the fire that lasts the longest. I want our fire to burn brightly, but more importantly, steadily, forever.