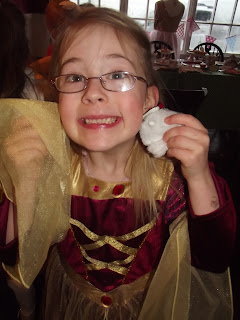 It was a little late, but it couldn't be helped.

Fifi's 6th birthday was at the end of January. Originally, her party was booked for the following Saturday, two days past her birthday, but that ended up unfortunately falling on the same day as her class's entry into the Inverclyde Music Festival, so the party date had to be set back another week. Her party, therefore, was over a week late, but that's just how it goes.

The whole point is, anyway, that the rabbit is running late for a very important date.

And the Mad Hatter's Tea Party was for celebrating his un-birthday.

So it all worked.

This year, instead of going through the blood, sweat and tears of organising a big birthday party, I paid a friend of mine to do it for me. Fifi wanted a tea party, so I had my friend from a cute little tea shop called Teacups organise a lovely Mother & Daughter Mad Hatter's Tea Party for me, and boy, did she deliver!

The girls all arrived in their fancy party dresses and/or Alice In Wonderland costumes, and were ecstatic over all the beautiful real tea cups and tea pots set out at their special table, not to mention all the beautiful sweets. "This is how the post people do it!" I heard one of the girls say. 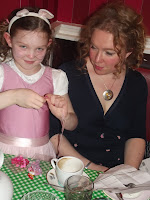 I had envisioned the mothers sitting with their daughters, making jewellery together with the kits at each place setting, but instead, the children took one table and relegated the mothers to the other. In the end, this turned out to be a blessing in disguise, as we mums don't often get the chance to sit at a big table together with nice tea, coffee and cakes and just chat for an hour and a half while our darling daughters behave wonderfully! 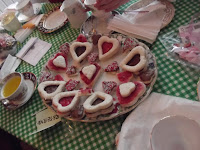 The girls had a great time, and they all behaved so well. They enjoyed pouring their own 'tea' (diluting juice in tea pots), trying on their chocolate moustaches, eating all the sandwiches (jam and Nutella sandwiches, shaped like hearts), devouring the cupcakes and jelly, and inspecting the birthday cake and party favours. Oh, and they got immense pleasure out of playing with the wind-up rabbits on the tables. In fact, an hour went by before they began asking for something to do. They had been overall uninterested in the jewellery kits, so I got some of them to start in on those while we mums finished our coffees, and then we played Pass the Parcel. Following that, we sang Happy Birthday, sliced open the cake, and, well, the party was over. It was just such an easy afternoon!

I must say thanks to Pauline and all the staff at Teacups for such a wonderful party, and to Robyn, who helped me make the cake and the party favours. And thanks to Marion, my MIL, for helping out so much with Jaguar (who was not a happy baby during the party) and to Lorna for taking Lolly and Fifi after the party overnight! Talk about a carefree birthday party experience in every way!