Why I Left My Church 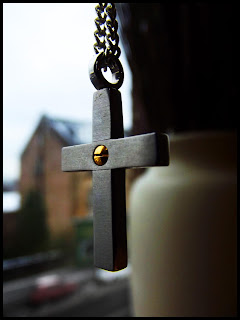 I've been fighting with myself for some time over whether to post about this or not. On the one hand, I don't want to trash anyone or upset anyone, particularly those I am still friends with in the church. On the other hand, rumours (always rumours) are going around about why we left, and they are false, and worse than being just false, they are hurtful. And if the rumours were just hurtful to us, we'd get on with it and ignore it, but the rumours aren't hurting us - they are hurting another family instead, a family I don't want to see hurt anymore. So what to do?

I think the only thing I can do is set the record straight. Explain why we left.

First of all, no statement has been made at the church informing everyone that we have left, which is the usual procedure. This means most people just think we've stopped going. Again, it doesn't matter much to us that people just assume we're "backsliding" (gotta love Christianese), but it's not the full story. As I've said here before, I and the children are attending a new church, one we feel very happy in, and one we are going to formally join. So first of all, in case people do not realise, we have formally left the church via letter to the overseers, deacons and members (though only the overseers have been allowed to see it), and the letter is very, very clear why.

The easiest way of doing this would just be to post a copy of the letter... but again, I'm not sure if I'm totally comfortable with this. However, I keep coming back to these rumours, so...

The rumour is that Scott and I have left because of a certain man in the church. This could not be further from the truth. In fact, it is practically the opposite; we have left in part because of the way everyone else has treated this one man. ("Everyone" being, of course, a generalisation, not a total absolution.) The story going 'round the pews is that he is the reason we have left, and this has been said to his face by leaders in the church (with whom we'd already had extensive conversations regarding our leaving and had already read the letter before making this claim). You can imagine the hurt this would cause anyone, but what's worse is the close relationship I have with his wife. Thankfully, this couple had already been made privy to my letter prior to being told to their faces that they were the reason we left, so that saved a lot of misunderstandings and pain, but it was only by coincidence that they had read the letter. It would have been a lot more likely that they hadn't, and if that had been the case, well... you see what I'm trying to say.

Rumours cause damage, that's what I'm getting at.

The other reason we left is more general, and it is a fault of probably many churches. Just because it is a general fault, however, does not mean it ought to be swept under the carpet and ignored. We felt that the church offered very little teaching or discipleship. We really needed some good Biblical teaching to keep us going, but our request for this to the leaders was rejected over and over. As the years went by, our secret doubts and questions grew and grew but no answers were offered. Who knows how many other people are secretly struggling and getting no help from the one place that claims to have those answers?

It's been said, in just about as many words, regarding our dissatisfaction with the teaching that 'Oh well, it's too bad Scott and Lori have left, but they were having problems anyway.' Insane! That's like telling a starving man, 'Oh well, we didn't give you any food, but you were already hungry anyway.' It hurts to be waved off so lightly, from a church Scott was raised in, and we have both been so active in for eight years. Yet another reason I hesitate to post this: It's a sad and painful situation for me.

So, to set the record straight, I paste below a copy of the letter sent to the church (edited for anonymity). I sincerely hope it does not offend the wrong people. It may offend others, but I am tired of being used as a pawn in an agenda to hurt people who do not deserve to be hurt. That offends me.


***
To the overseers, deacons and members of [the Church],

It is with sadness yet careful consideration that we write to you this letter stating our decision to remove our membership from the [Denomination]. This decision was not a quick or easy one; indeed it has been months in the making. Our reason for leaving is twofold:

1 - For many years we have felt the church has offered very little in the way of discipleship and teaching to its members. When the Family Service was started so many years ago, it was stated explicitly that the purpose was to build up the members and not to become a ‘gospel meeting’. Yet very quickly it became nothing more than an outreach. Outreach is important, of course, but should not replace the church’s obligation to feed and shepherd its own flock. We spoke to people about this on numerous occasions and put to the leadership our desire for it to offer more teaching intended to build up its members, the body of Christ, for our spiritual growth. This was never acted upon. Instead, the Family Service, and many of the other various meetings aside from the [Lord's Supper], began directing all its efforts to outreach and none to in-reach. In plain terms, it became mostly a church for drug addicts. We requested that the ministries be more challenging, perhaps going through a book of the Bible in depth or a short series on a Biblical topic, in order to give the body more ‘meat’ to feed on and be challenged by, instead of only ‘milk’. This was refused over and over by the leadership. Due to lack of teaching and challenging, we found ourselves struggling with our faith but with nowhere to go. We began to feel the church had nothing to offer us, and even more sadly, it seemed uninterested in what we, as active members, desperately needed.

We’d been approached by the overseers about our lack of attendance at the [Lord's Supper]. As a young family with two children and one on the way, our attendance had dwindled considerably. We agreed we would make more effort to attend regularly again as soon as we recovered from the birth of our third child. A couple of weeks after his birth, I, Lori, went to the [Lord's Supper] for the first time in a year and really enjoyed it. A glimmer of hope ignited in my heart that maybe things were really changing and there would finally be something for us spiritually in this church.

At the same time, after years of asking for ‘meatier’ ministries, the leadership decided to have a short block of sessions focusing on the topic of end-time prophecy. While this might not have been our personal choice of subject matter, we were very excited that finally something was being done, and we, for the first time in years, began to look forward to Sunday mornings again.

This is where the biggest problem, and our second main reason for leaving, comes in.

2 - The general reception of this series of ministries was appalling. People displayed their unhappiness with this decision by boycotting the meetings – in essence, ‘voting with their feet’ – because of, quite frankly, who was leading them. The response to what we felt was such a positive step in the future of our church was to decry the subject matter and the speaker. It became personal. People began to launch personal attacks on other members, causing irrevocable hurt to people with known sensitivities. This I observed with my own eyes. Stories and gossip spread, and as things filtered back to us, we couldn’t believe how skewed and untrue, not to mention hurtful, they were. Never had we expected to see such behaviour in a church that before had seemed so loving and accepting. It seemed the love and acceptance were reserved for outsiders and drug addicts only, but not its very own members.

This was what made the final decision for us. The first positive step the church had made in years resulted in boycotts, personal attacks and a huge divide among its members. To a family already struggling with doubts, this was the last thing we needed to witness. Not only had we been repeatedly ignored when we asked for teaching, we now saw the distasteful way people could be treated by their own church family. We realised then that [the Church], and the [Denomination], was no longer a place we wanted to be or where we wanted our children to grow up.

It is sad for us to have come to this conclusion. Scott has been a member of the [Denomination] his entire life, and Lori has been a member since moving to Scotland eight years ago. We have waited to write this letter until we were sure of what we wanted to say, and until we had found a new place to attend church, which we now have. We recognise that we ourselves are nowhere near perfect, and we hardly expect anyone else to be. We are not placing the blame solely on the church for our issues of faith – we recognise there is personal accountability - but we do feel the church has failed in its responsibility to care for the spiritual needs of its members. As far as the way people have been treated, we certainly understand that no church is without its conflicts, but we also never expected to witness such un-Christlike behaviour from our church. We have no personal bad feelings, no personal agendas, against anyone, but we cannot in good faith maintain membership in the [Denomination] after the manner in which we have seen people be treated. We have many friends in the church, and it pains us to leave, and it pains us to write this letter. We only hope that by speaking frankly about our decision that it will lead the church to reconsider its obligation to feed and disciple its members first and to outreach second, so that it does not become an outreach church (‘drug addict church’) only, and that people will also take responsibility for how deeply their negative actions are hurting vulnerable people – whether they are aware of those people’s vulnerability or not.

In Christ’s love,
Scott and Lori

Posted by Lori Arnold at 11:13 AM
Email ThisBlogThis!Share to TwitterShare to FacebookShare to Pinterest
Labels: concerns, faith, life, religion