I've never been a member of a church or denomination that practices Lent but have practised it on my own for many years. When I first started, I was very pious, and did it 'the right way' - replaced x with times of prayer, focused on repentance, all the good stuff.

The last two years have been the hardest, as my faith in God was waning significantly, and I found it hard to do Lent 'right'. Last year, while I maintained my Lenten fast (no drinks other than tap water for 40 days), there was pretty much no religiosity to it. But I didn't feel guilty about it. In many aspects of life, if not all, we fail to achieve our goals with perfection and immaculately spotless motives. For a believer, guilt should be given no lurking space in our hearts, and while I'm a pretty pathetic believer, I still believe in giving guilt the old heave-ho.

This year, Lent has come early, not giving me much time to think on it. In years past, something would always come to me - usually something very hard to give up, like meat or cake - and I knew right away it was the thing. Nothing like that has come to me this year. I considered just skipping Lent this year, but Lent is a discipline, and discipline is the most effective when it's done... well, out of discipline.

So what can I give up this year that will mean something to me? Giving up alcohol or chocolate is always an option, but I don't think it would have any real meaning to me this year. It would just be an act, a challenge, but nothing spiritual would really come of it. My life goal for this year is 'Simplicity'; I could give up a physical 'thing' each day, but let's be honest - would I actually remember to do this? Doubtful. So, if I want to practice Lent this year, and I want to do something that will make a difference to me spiritually, what can I give up? 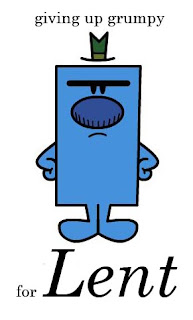 I've decided to give up negativity.

Once, a few years ago, I gave up anger. It was wonderful. I learned so much self-control that year, and felt so much happier with my life, my kids and my husband. So this year, I'm going to take it that one step further and give up all negativity. If I'm around gossip, I'm going to turn it into something positive. If my kids spill my SodaStream syrup all over the floor and the cabinets (AGAIN), I will keep calm (unlike LAST TIME). If Scott and I disagree and I start to feel nippy, I'll hug him instead (possibly quite aggressively). I'm going to take negative feelings and situations and turn them into positive ones.

No question I will fail many times. But life - and Lent - aren't about perfection. They are about learning, growing, trying, and most of all, forgiving. Forgiving ourselves for our mistakes, forgiving others for theirs. Accepting ourselves and each other for the imperfect beings we are, and reaching towards betterment, tripping and falling even as we grasp for it. Repenting of our mistakes; in other words turning around and trying again. I'll probably find myself getting angry at my misbehaving kids. I'll probably find myself annoyed at obnoxious people and bad drivers. I'll probably get snippy with my husband for not taking out the rubbish. I'll probably grumble about housework. But when I catch myself in these negative moments, I am going to gather all my strength and will-power and steer myself out of it, like a boat steering out of choppy waters.

What are you giving up for Lent? Leave your comments below!
Posted by Lori Arnold at 1:42 PM
Email ThisBlogThis!Share to TwitterShare to FacebookShare to Pinterest
Labels: faith, lent