It's been quiet around here, because since Sunday, we've all been lying on our death beds, making bargains with sleep for respite from our misery.

I took Fifi and Jaguar to church on Sunday, leaving Lolly at home with Scott. Lolly had already been feeling rotten since Thursday night. When we arrived at church, I noticed Fifi was acting a big clingy and funny, but I assumed she was just being shy without Lolly there with her. Then Jaguar, who is usually quite cheerful and quiet during church, happy to take a boob if he starts getting chatty, started crying and refused to feed. I took him out into the back hall to the creche, and while playing with him in there, my back started aching, and then my neck and head. By the time church was over, I was feeling completely exhausted. I took Fifi from Sunday School, and she looked pale and lethargic. We came home, with Jaguar crying, and all three of us went straight to bed.

We were still there Monday morning.

All four of us, I and the three children, have come down with a flu-like virus that is seemingly attacking the whole entire town. Yesterday and today, only two children showed up for nursery. All of the kids' friends from school and nursery are off with this illness. It is rubbish.

We stayed in bed all Sunday and Monday. Today though, unfortunately, we had to venture out for some groceries, as our fridge was empty (not that any of us have much of an appetite) and also I needed to mail some ebay parcels. The girls did not want to go, so I bribed them with McDonald's Happy Meals (it got some food in them, at least) and let them go to the shops in their pajamas. We must have looked like freaks. 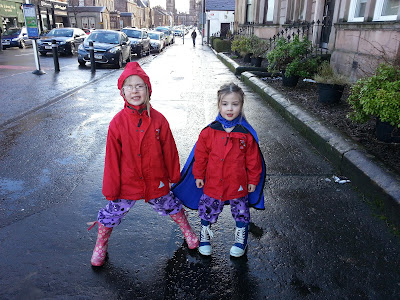 So that's where we've been the last few days. I'm starting to feel better, just battling a runny nose now and a bit of light-headedness. The children are all at varying degrees of wellness, though I think they'll be staying off school again tomorrow, at least for one more day.

But let me just say, the kindness of people in my life really blows me away. Yesterday, while feeling like a soggy plastic bag stuck to a tree branch flapping around in the wind and rain getting pooed on by seagulls, a new friend, who I've only just recently started getting to know, texted me to ask if I needed anything from Tesco. Gratefully, I asked if she could just possibly bring me some milk and some tomato soup if it really wouldn't be too much bother, and I'd give her the pennies for it. She arrived at my door with a whole bag of groceries for us, including two kids' magazines for the girls, and refused to take anything for it. She then offered to let me go to bed while she watched Jaguar for a wee while. I preferred to stay up and have some company, so she held Jaguar while I shivered under a blanket and had some friendly adult conversation.

Later that day, my dear mother-in-law popped in, who was herself feeling miserable with this virus, with another bag of shopping, and stayed to help look after the kids for me for a while. She even took Lolly to the chemist for me to get the kids some more medicine.

Honestly, if I ever wondered if good people still existed in this world, I needed only look right around me. One day when I write my memoirs about the people who influenced my life and made a difference, these people will be getting whole chapters. Thank you both.

And now... I dare say, it's bedtime again.
Posted by Lori Arnold at 4:58 PM
Email ThisBlogThis!Share to TwitterShare to FacebookShare to Pinterest
Labels: friends, life