No Cards, Not Today

Right. Plan for next December: Don't be so busy with EVERYTHING else to do what's important, that is, Advent Activities with the kids.

I've been a real failure this December.

Sunday, we were to have a picnic in our pajamas on the floor. For some reason, eating dinner on the floor as a picnic is mega-exciting to the kids, and to do it in pajamas is somehow even more incredible. Well, we did manage to follow through with that, though dinner was merely leftover party food from the day before, reheated. And I didn't get any photos. I was still recovering from post-party stress disorder. I think I might still be recovering to this day.

Yesterday, the 10th, we were told by the elves to paint Christmas decorations. I am proud to say we achieved this as well, and it went according to plan. I went out in the morning and found some great wooden tree ornaments for £1 each and bought enough for all the kids to paint one. After school, the boys (my childminded boys will be from here on known as 'the boys') and the girls (my girls) finished their homework and donned painting aprons and went to work. They seemed to really enjoy it, and even Lolly managed to not stress me out with the project, which is pretty magical. 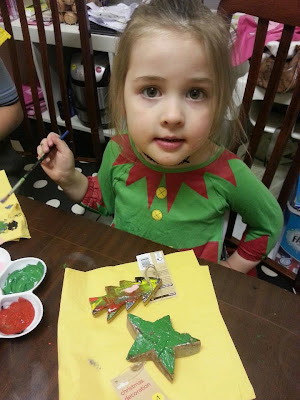 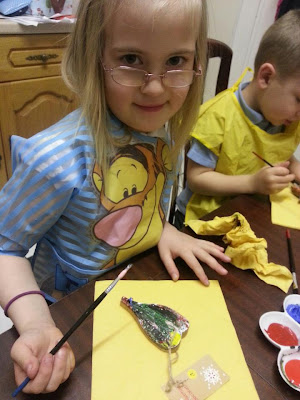 But today, we were instructed to make Christmas cards and deliver them to the neighbours. Cue loud BWAW BWAW BWAAAAAAAW. (That's a failure buzzer noise, FYI.) We never did anything of the sort. I had an IntoBento party tonight, displaying my stock and doing some yogurt taste-testing and demonstrations, so I didn't have time to get up to my elbows in glitter and glue. The kids actually all had fun setting up my 'shop' with me anyway, so we still had fun together, just not elf-approved fun.

The party tonight went well, by the way. I wasn't sure if anyone was going to come at all, but in the end, a good few people came, and we had a good time over mulled wine and mince pies, and I made some pennies for Christmas. So, for any of you reading, thanks for coming over! It was great catching up with those of you I haven't seen in a while!

Now, it's nearly 10pm, and I really want to go to bed, but Scott and I are going to watch Sunday's episode of Dexter first. We need some us time, and what better, more romantic way of spending time together than watching a TV program about a serial killer?
Posted by Lori Arnold at 3:52 PM
Email ThisBlogThis!Share to TwitterShare to FacebookShare to Pinterest
Labels: Christmas, DeBloAdMo, intobento