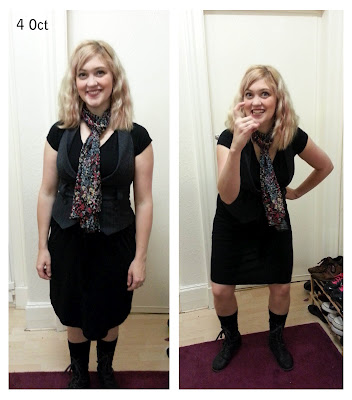 Today's waistcoat inspired by everyone else in the Facebook group, who all seem to have worn one either yesterday or today!

Scott (who is taking these photos and is, sorry to say, not much of a photographer) told me
I looked like a pirate today with my waistcoat, boots, scarf and hoop earrings. Cheers, pal. My hair is wavy from yesterday's braids, and I'm also wearing pantyhose under my socks because it's brrrrr outside. (The hose had to get ditched midday because I got a run in them, and the boots got traded for black slip-ons because they were too awkward to put on and off every time I left or entered the house, which is about a million - or three - times a day.)

This was very much an experiment today, as I had no idea what to wear. And then of course I felt like a pirate all day. Still, one of the mums at nursery said to me 'Looking trendy as ever!' and while I don't normally consider myself trendy, I was delighted with the compliment. Especially considering I've been in the same dress for the past four days (and oh it shall continue!)

I have ideas for this weekend, though, for while Scott and I are away on our romantic (plus Jaguar...) weekend away. Lolly's nursery teacher was asking how I was going to do the dress for Halloween and suggested adding a white apron and being a French maid. I laughed and added that Scott and I are going away tomorrow... Haha! Adds a new meaning to getting this dress dirty! (Work it, girlfriend!)

To continue my theme of simplicity and anti-materialism in October, I dutifully started clearing out today, and being the sacrificial person I am, I began in... the children's room. Yes, I know, I know, so gracious am I, so thoughtful, so willing to part with things in the name of goodwill and higher ethics. My children will thank me for it one day.

Well, to be honest, it's the room that needed it the most! And it's breaking me in gently, this getting rid of needless, useless clutter, before I have to take on my own bedroom. I started with under the bed which brought back memories...

My older brother used to tell stories when we were kids of the adventures that could be had under my bed, finding the lost pyramids and whatnot. Come on, it couldn't have been that bad - could it? If the state of under my kids' bed is any indication, yes, it really is that bad.

I had a glorious time throwing away just about EVERYTHING (and discovering many long lost articles of worth almost as great as the pyramids themselves - like Fifi and Lolly's baby shoes! Gush!) and then hoovering up all the dust and bits. Oh, it looked amazing. I was sad to the bed back in its place. Now all that is under it is the girls' two Trunkis, their shoe storage box and a storage box for their doll clothes. If only it could last.

I then tackled their toy shelves. I threw out ALL toys that were broken or missing parts, no matter what, with the single small exception of a set of hand-painted wooden stacking boxes from Guatemala in which one of the boxes' lids has become detached. The lid is still with the set, so I kept it, with the intention that maybe one day I can fix it. I also threw out all toys I didn't want to keep or can't stand seeing sprawled all over the floor. I put kits together, stacked stackers, and dressed Barbies. It was almost like playtime.

One thing that has struck me in the past couple of days, as I've attempted to simplify and get things sorted, is that I'm lazy. I'm a pure lazy bisom. I realised I do a lot of 'I'll get around to that' with only half an intention of doing so. I put things off that are either too much effort or unpleasant. For instance, as I was finishing up some laundry last night and about to go to bed, I thought, 'I still haven't cleaned the bathroom. Och, I'll do it tomorrow.' Then it struck me: that's what I said yesterday too. So I got out my damn rubber gloves and cleaned the bathroom right then and there. And you know what? I was done in five minutes. It really wasn't that big a deal!

I did it again this morning. I wanted to wear boots with my dress this morning (Arrrr, matey), but they were still in my winter shoes box. Not that the shoe box is far away, or in a loft, or hidden under a lot of other boxes. No, it's just in my closet. With nothing on top of it. It does have a lid, so, you know, that takes some effort. I nearly just didn't wear boots today because I'd have to get into the box. Lazy! Once I recognised how ridiculous I was being, I opened the box and found on top a pair of boots I'd forgotten all about! Which is kind of like getting new boots! These are the ones I decided to wear today (shiver me timbers), leaving me with still more boots to choose from tomorrow.

I want to curb the laziness. It's one thing I didn't get from my mother - her drive. If she sees something that needs to be done, she just does it. She slots it into her immediate schedule and does it. I'm so much more procrastinating than that, but I want to change. If I see a wall, I should paint it, right? (Not right, because I rent, but you get the idea.) At the very least, I'd like to start getting things done when they could be done easily, instead of waiting until they become a major chore. I took a big step in the right direction after dinner tonight; I rinsed the dishes, put them in the dishwasher and ran it, wiped the table and hand-washed everything else that was left.

Here's the big secret: It was so much easier than doing it the next morning.

We are taking part in the October Dress Project in support of Macmillan Cancer Support. Please consider donating to our cause.
Posted by Lori Arnold at 1:12 PM
Email ThisBlogThis!Share to TwitterShare to FacebookShare to Pinterest
Labels: motivated moms, October Dress Project