Why We Don't Have TV

A day or two ago I mentioned that we were one of those weird families who don't have TV.  As I'm riding in the front seat of our car and thinking my little thoughts, it occurred to me it might be prudent to clarify, lest anyone think I'm a liar.

(By the way, blogging via mobile phone is awesome! Technology!)

When I say we don't have TV, I mean we don't have access to TV programs. We don't have an aerial so we are not capable of picking up signals.  We do however own a television set for watching DVDs.

This is not for any strange religious or hippy reasons.  We just don't want TV.  Scott and I are both prone to couch-potatodom and decided when we got married to just not get TV.  If we had it, we'd just end up sitting around watching rubbish all day. If there is something we really want to watch, we get it on DVD or watch it on iplayer or something.

So if you see a photo with a TV in the background, you shouldn't think that statement about not having TV is a lie.

And just because I can (seriously, 3G, it's incredible!) here's a photo of Jaguar 'driving' the car with Daddy while stopped at the petrol station.

(Gah, it's going to be sideways. I'll have to correct from home.  Mobile blogging just got a little less awesome.) 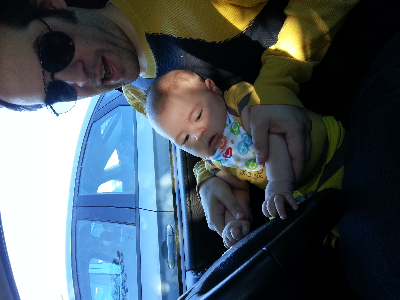 Posted by Lori Arnold at 6:27 AM
Email ThisBlogThis!Share to TwitterShare to FacebookShare to Pinterest