September. Five books read. Since talking to people about the book challenge, I've started to feel rather inferior; I've heard several people claim to read hundreds of books a year, according to their Kindles. Maybe they are telling the truth. But I'm doing well as it is to get through fifty-two in a year, if I can manage it. Five books in September, I think, is doing just fine.

You know me and my love of NPR-recommended books.

Well, I listened to the author being interviewed on "Fresh Air". The book is a semi-autobiographical diary of a fifteen year old girl who has a sexual affair with her mother's boyfriend.  Gloeckner found her old diaries from that time in her life and rewrote them to become this novel.  She talked frankly about her experiences in the interview, as a fifteen-year-old girl who thought she was all grown-up (as do all fifteen-year-olds). Her story is incredible and heart-breaking, but the part of the interview that blew me away was when she said this:


Gloeckner: I went to a therapist, I guess I was sent there when I was 15. I think the school wanted me to go, maybe my mother wanted me to go, because I had been kicked out of several schools already and it wasn't clear why. I told the therapist [about the sexual experience] and she was totally freaked out, she was actually a therapist who dealt with childhood trauma ... so I thought she was going to help me, but she just said, "I've met with your mother, I cannot talk to you anymore. I'm going to have to find someone else for you to go to." She didn't report back to my mother, she didn't tell my mother what was going on, she just kind of flipped out. I remember feeling like, "This is too much for adults, they're not going to want to hear it." I was kind of silenced just by the therapist telling me she couldn't deal with it and not really explaining why.


Imagine a young girl, a child really, admitting that she was in a sexual relationship with a grown man and a therapist responding like that! I pretty much ordered the book immediately after hearing the interview. (This has been made into a movie too, which I want to see.)

The book is half graphic novel, half diary.  She sketches everything in her diary from pictures of her bedroom and her backpack contents to explicit drawings of her and her mom's boyfriend naked. (The book now is in the very top shelf of my closet where my kids can't find it!) At times, she goes pages and pages into true graphic novel mode where the plot continues in comic book blocks. The style is very unique.

However, I found the book really disturbing. And it's not really meant to be.  The author writes it from the character Minnie's point of view, which is very haunting for how authentic it is. She also says this after the Foreword: 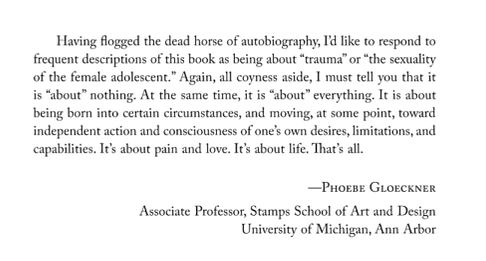 I was not a hypersexual teenager, not like Minnie is, so I found it hard to relate to personally. But it gave me an insight into the minds and bodies of girls who were.  (Why are boys allowed to be hypersexual teenagers but girls are not?) Anyway, it was disturbing to me how her mother's boyfriend came onto her so shamelessly and how oblivious she was to the wrongness of the situation. And yet even using the word "wrong" feels wrong, as it is written so totally in her perspective that she didn't see it as wrong. Sure she knew it was naughty, and eventually she begins to see it as a little perverted, but overall she believed they were in love and therefore it was all right.

It was hard for me to read this, but I think very important too. I one day will have teenage girls. Will they feel like this inside? Minnie had a poor relationship with her mother and had no adults to talk to about what she was going through. I never want my son or daughters to have no adult to talk to. Maybe they won't come to me (I am their mother), but please let there be someone neutral they can know and trust! (This is part of why I wish we lived in Seattle, where our best friends could be our kids' "other parents" and we could be their children's.)

Anyway, back to the book. It was good, but it had that Lolita quality to it that made you feel a little icky inside for understanding something you morally shouldn't understand. You at once are shocked at Minnie's behavior as well as devastated for her. She is a child being sexually abused by an adult, but she doesn't see it that way. It's so... mm. Just hard to read. And I'm a major prude when it comes to sex, so there's that.

Dying Light by Donald Hays (A book of short stories)

Donald "Skip" Hays was one of my writing professors at the University of Arkansas. He was also my Honors Thesis professor, who helped me write my first book of poems.

I bought this book a few years after graduating. It's been years since I've read it, but so many of the stories have stuck with me over the years. They are so poignant, so raw, so authentic. As I read them again, I was struck once again by the brutal honesty of the stories. Life is messy. Love is not pure. We age ungracefully.

The book seems to be out of print, but there are plenty of used copies available on Amazon. Looking for a book of short stories? I highly recommend this one.

This was a hard category for me to check off - I was a bookworm in high school and an English major in college! I read all the books! But while perusing the Classics section of Barnes & Noble a few weeks ago, I realized this little gem is one I never did read. It was never assigned to me, but it was definitely a book I should've read in school but didn't.

Many of you will know the story, but briefly, it's about an unlikely pair of day laborers who have a dream of one day owning their own plot of land to live off of.  George is a small, fairly clever man, and Lennie is a large, "simple-minded" fellow. (What is the most PC term for what Lennie was?)

I knew it was a sad story from, you know, not living in a cave, but I've managed to get through life not knowing anything about the book. And when I got towards the end, I spent the last several pages with my hand over my mouth (literally). As I closed the book, I just sat there... Dear God. I didn't know it would end like that.

Well, after reading that, I needed something a little more lighthearted. Oscar Wilde it is! My favorite play is The Importance of Being Earnest, but I've never read any of Wilde's other plays. Until now.

An Ideal Husband is as funny as The Importance..., and just about as complicated a denouement, though not quite. I love Wilde's sense of humor. I love how ridiculous he makes his characters and the ridiculous things they say - because everything they say is so true! If we all said things as they really,truly are, we'd all be speaking as if we were in an Oscar Wilde play.

I'll tell you the truth. With only three months left of the year and still a handful of categories to check off, I'm starting to choose books for their length. Salomé is a one act play, and since Wilde translated it from French, it checks another box. Thank you, sir.

It's a tragedy play. It's okay. I wasn't deeply moved or anything by it, but perhaps it would be better performed than simply read. It's the story of King Herod and John the Baptist, shared from the perspective of the King's court. The daughter of the queen, Salomé, becomes obsessed with Jokanaan (John the Baptist - the Hebrew name was used), but when he rebuffs her advances, she becomes vengeful. When Herod asks her to dance for him, promising her whatever she ask for as payment (up to half of his kingdom), she agrees to dance... then asks a terrible price. (In case you don't know the story - not all of you were raised in church! - I won't tell you what she requests.)

It's typical tragedy/ morality-play stuff. It's okay. It was short. That was the main thing. Leaving me time for more hefty books in the next three months. Twelve books to go!

To see what else I have read this year:
July/August
June
May
April
March
February
January
Posted by Lori Arnold at 10:32 PM
Email ThisBlogThis!Share to TwitterShare to FacebookShare to Pinterest
Labels: 2015 Reading Challenge, books, challenges