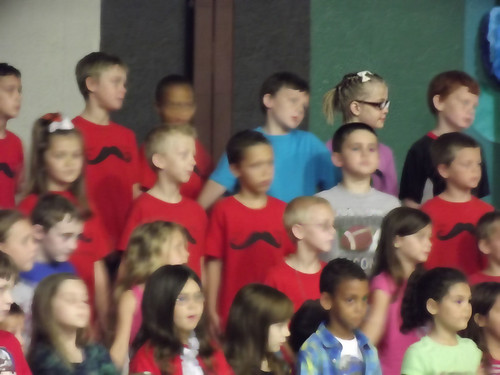 Last week I attended Fifi's 1st Grade Play and Spelling Bee. The play was an adorable Mister Rogers' Neighborhood play, which I'm not gonna lie, had me welling up at a few places. Mister Rogers was a lovely man.

The top three class spelling bee winners from each 1st grade class made it to this public spelling bee. Fifi had come home earlier that week to tell me she had almost made it into the spelling bee, but she got knocked out at the very end, coming in fourth. At first I was disappointed for her - remembering my own similar spelling bee experience in fifth grade - but after watching the spelling bee that day, I was really glad she didn't make it.

Twelve 6-7 year olds stood in a line on the stage in front of all the mommies and daddies, grandparents and siblings, teachers and fellow first graders. They began the rote... " 'Dog'. As in 'I have a dog for a pet.' 'Dog'." Then the first child spelled 'dog', and so it went on.

The first round of words were simple three-letter words, which assumably was to allow each child to get through the first round perfectly. But nerves, and all those faces looking at them, and nerves... and, well, the last little child misspelled "hug" and had to sit down.

My original thoughts were, "Oh my gosh this is going to take forever." Until a little boy misspelled "knock", went to sit down and burst into tears.

My heart broke for him. Poor kid! I could just imagine how he felt, because I remembered that feeling so well. The humiliation of misspelling a word in front of all those people. Believing they all must think you are so stupid. All your friends seeing you fail. Your parents seeing you fail. The whole world seeing you fail.

After that, the words got longer and harder. "Because". "Although". "Choice". Kids started getting knocked out of the running much more quickly. And more tears fell down little cheeks.

When I was in fifth grade, I wanted to go to the spelling bee so badly. I was an excellent speller. I got 100% on all my spelling tests. I loved spelling words. We had our class spelling bee to determine who would participate in the school-wide bee, and it came down to just me and one other boy in the class, a boy who was a clown and didn't care about spelling bees, even though he was fairly smart, who didn't like school and was always disruptive. We spelled off word after word until I was given the word "balloon".

In my head I knew it was one of those words with a double letter. But was it a double O or a double L? The "oon" sound was obviously a double O so I spelled "Balloon. B-A-L-O-O-N. Balloon." The teacher shook her head and the boy took his turn. He spelled it right. He won the spelling bee. I lost.

I was devastated. Not just because of how badly I wanted to be in the spelling bee, but because of the humiliation. Everyone (I thought) thought I was stupid. Everyone else (I thought) could spell "balloon" but me. Even the teacher (I thought) was disappointed in me for making such a colossal mistake. I went back to my desk and cried into my arms. The boy even graciously came over and said, "You can take my spot. I don't want to go to the stupid spelling bee anyway." But it wasn't his choice to hand over his spot to me. He went to the school wide spelling bee, because he was the better speller.

Fifi's first grade spelling bee was coming to an end. One boy from her class was left, so we cheered him on (just as we cheered on all the children, correct spelling or not). When he misspelled his word and had to sit down, we could see the look of being totally crushed on his face. The remaining three children spelled off until there was a first, second and third place winner. Each winner got a medal, and the spelling bee was over.

The children were allowed to go see their parents. As I made my way to Fifi, I passed by nine crying children, who were hugging their parents, burying their shame- and disappointment-covered faces into their parents' shoulders. It was awful. I touched the shoulder of the boy in Fifi's class and told him how great he did. He looked up from his mom's lap with tear-stained cheeks, and barely acknowledged the compliment before a new flood of tears gushed.

I decided that day that spelling bees are awful.

Setting up children that young for public "failure" is cruel. While all the teachers and parents are thinking, "Great job, you did so good!", kids don't feel that. They only feel embarrassed, disappointed, and "stupid". Yay for the kid who wins, but all the others? It was heartbreaking seeing so many upset kids. I was glad at that point that Fifi hadn't made it into the final spelling bee. Misspelling her word in the classroom setting was a disappointment for her, but there were no tears. Yet had she misspelled a word in that setting, in front of all those strangers, I know for a fact she'd have been one of the criers. And trying to console her, trying to get her to believe she wasn't a failure in anyone's eyes or dumb or not a good speller would have been tough. I'm glad she was spared that humiliation.

Kids will discover the real world soon enough. Can't we spend these early years building up their confidence first before letting the world try to tear it down?
Posted by Lori Arnold at 8:43 PM
Email ThisBlogThis!Share to TwitterShare to FacebookShare to Pinterest
Labels: childhood, children, kids, life, school