I'm no model parent; I've done some crappy things as a mum. I've tried some techniques that I realized later were just no. I'd like to say children don't come with a manual, but actually, there are as many parenting manuals out there are there are Frank Zappa albums. Actually more. Gazillions more. And each manual has different instructions, and of course, each child has a different operating system, so really, we'd need a custom manual for each custom child our wombs produce.

There are a million books, blogs, articles, religious texts, notes on paper napkins and wives' tales about the proper way to discipline and/or punish your children, particularly about harms/benefits of spanking, so I'll leave the spanking topic for another day (or never). Instead I'm going to mention the OTHER newly popular punishment technique that's currently en vogue.

I've seen so many of these lately 'gone viral'. Remorseful, teary eyed children holding a sheet of paper with their crimes against humanity scrawled across. Then posted to the internet for all to see. I think I first saw this trend used to shame pets for ripping up couches and eating birthday cakes, in a cutesy, hilarious kind of way. It was cute when used on pets. But kids aren't pets.

Kids have dignity. They are self-aware. They have fragile reputations. They have a sense of shame and embarrassment. They have friends too immature to judge fairly.

And call me crazy, kids should also have some right to privacy and certainly for redemption.

I remember when Fifi was potty-training, I read somewhere that someone liked to hang out their child's peed-on bedsheets outside the child's window with the stains for everyone to see, to shame the child out of bedwetting. I thought this was so horrendous, I didn't even want to hang clean kids' bedsheets out on the washing line, in case people thought I was insinuating that my child had wet the bed.

Nowadays, with social media taking over the universe, I've started seeing things like the 'Get Along T-shirt' with two crying siblings stuck together in an oversized t-shirt. I guess it's not the get-along t-shirt that irks me (though really, is that gonna work to actually make the children friends again?) but the online posting of it. It's like a new, worse form of PDA - Public Display of Admonishment. Then I saw one of a woman shaming her pre-teen daughter for inappropriate texting - the daughter looking horribly embarrassed while the sheet of paper told all her junior high friends that she is an inappropriate texter. Not only is that ammunition for bullying and judging but an invitation to boys who like to inappropriately text to send her more inappropriate texts. Because she obviously likes it, dirty slut. And then I saw another one recently, a sign on a door saying "So and so can't play this week because they peed on the floor like babies!!" Now, I don't know if the boys were 5 or 15 but either way, now the whole neighborhood knows. Scratch that, the whole internet knows.

Why is public shaming the new "Parenting Done Right"? (By the way, can we destroy the phrase "parenting done right" please?) Here's how I see it.

No one is perfect. Duh, we all know that. When I screw up (which is like, daily), I thank Hollywood that I'm not on the Truman Show and no one actually has to know about it. I feel enough remorse and humiliation when I screw up. No, I know that it's my job to raise my kids and guide them to do the right things and discipline them when necessary. But as parents, aka humans, ourselves, we should try to relate a little to our own little humans. We know that we feel really crap when we do something wrong, and we can assume that kids can feel really crap when they do something wrong too, once they understand why it was wrong and who it negatively affects (whether it's someone else or the child him/herself). When we screw up, we have consequences too, but we would be livid if our screw ups were posted on the internet for all our friends, family and colleagues to see.

Imagine this. You've had a ridiculously stressful week at work. You've got more work piled up than you think you can deal with. In your stress and overwhelm, you forget to return a very important call. Your boss is furious. You feel like crap, because you knew how important that call was. You have to face your boss's fury and your own guilt. All day long you walk around with that bottomless hole in the pit of your stomach, horrified that you could've made such a stupid mistake.

Then your boss posts a note on your office door for all your workmates and clients to see; "Since Judy can't remember to return important phone calls to important clients, I am posting this note on her door to remind her to always follow up when she is supposed to."

Or imagine you and your partner get into a fight. You say some really, I mean, really bitchy things that you didn't really mean, but were totally regrettable. Your partner then posts on Facebook, "Since Beth told me I'm a worthless piece of sh*t, I'm posting this so everyone knows what she really thinks of me."

Someone would be getting some seriously WELL-DESERVED choice words for that, am I right?

This morning, I was running late for the gym, thanks to my three precious offspring. I finally got all three kids in the car, only to discover that Lolly was wearing snowboots (it's June) to wear to her Kid Fifit gym class. Only because I was already late and frustrated, I yelled, "What is the MATTER with you? Seriously! Eejits!" I immediately apologized for calling them eejits; it was totally out of line. Plus, there was no reason for me to get so upset. (Also, I could've done much worse, and in times of extreme stress, I've had all out temper tantrums at them.) What if I'd lost my temper so much that I smacked her? I'm against smacking, so this would be pretty shameful for me to do, something I'd rather my peers not know about. And what if my kids were so angry that they wanted to *really* teach me a lesson for being a jerky mum? And they posted on Facebook for all my professional contacts, family members, and sanctimonious mummy friends to see: "Mom lost her temper for no good reason today and smacked me hard. All because I'd worn the wrong shoes." Totally freaking unfair, embarrassing and potentially incriminating. It would not be acceptable, would it?

So why then do we think it's okay to shame our kids like this?

It comes down to this: Shaming never did anyone any good. It never made anyone stop and think, "Hmm. I should change my behavior in the future." It only makes matters worse. It is lemon juice in an open wound. Correction and consequences help for future reference; humiliation just hurts and angers. 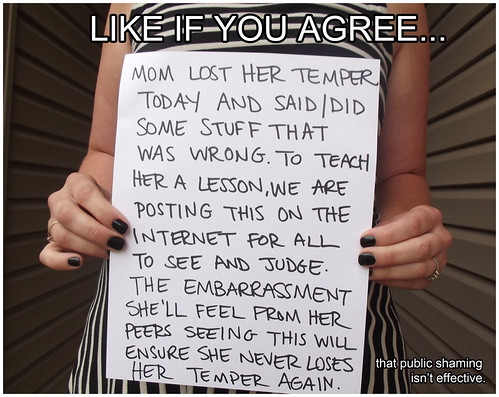 Posted by Lori Arnold at 6:00 AM
Email ThisBlogThis!Share to TwitterShare to FacebookShare to Pinterest
Labels: children, kids, life, motherhood, parenting