I've decided to work on being more laid back this summer. I'm going to follow Elsa's example and let it go.

About some things at least.

I mean, there are things I'm not laid back about, that, in fact, I'm cracking down on. Home cleanliness is one of those things. I've made a rule that the girls' bedroom must have nothing left on the floor at bedtime. Anything left on the floor after they go to bed gets put in a bag, and they have to earn it back. I extended that rule to the living room too. With three kids plus all the extra kids who are welcome to pass in and out of my house all summer, I cannot face constantly cleaning up after everybody. So far (it's only been a week), the rule has been well-kept by the kids. They go down and wake up to a clean bedroom every day. And now maybe the living room will be the same.

I've also returned to my Motivated Moms app and have been using it long enough now that I no longer really check it daily, but leaving my kitchen clean has become more of a habit. It's not perfect every day, but it's better than it usually would be. My laundry is usually kept up to date, and I'm keeping the inside of the van clean. These are not matters I want to be laid back on.

But letting the kids be kids and do kid things is an area I need to chill out in. Lolly, for instance, loves to cut up paper and glue or tape it into works of art. I never want to quench her creative side, but I go a little mental when the kitchen table and floor is covered in tiny bits of cut up paper and glue spots and broken crayons and scissors in Jaguar's reach. However this summer, I'm determined to worry less about it. As long as crayons and scissors are put away, I'm going to let it go. I'm lucky she keeps her art projects to the kitchen table like she's supposed to, right?

Jaguar is a total boy's boy. He loves to get dirty. Yesterday at the park, he found the dirtiest, most disgusting soggy wet patch in the mud and splashed around in it. Then he slipped and landed right in the middle of it. He was covered from shoulders to feet. He got back up and kept jumping and splashing. I could feel the germs and amoebas crawling all over his skin, but I kept my composure. I stripped him to his diaper for the walk back home, hoping no one would judge me for my half naked toddler walking home in the blazing sun. His clothes - shoes and all - went straight into the washing machine.

And Fifi has become obsessed with gardening. I love that. It also means her fingers are always caked with soil and her clothes are stained. I'm going to just go with it. She and Lolly have been 'collecting worms' too, and while the worm habitats they are creating with plastic ice cream tubs will NOT be permitted in the house, I'm not freaking out over all the dirt. I personally hate mud and dirt, but I am making the conscious decision to let them play in the dirt all they want. They can wash their hands with the garden hose before coming in.

The garden hose. I'm going to get laid back about that too. It's hot outside. And yes, water costs money so they can't just play in the hose all day, but they can play with it some. They can fill up the paddling pool and jump in fully dressed. As much as that makes my twitch - I hate being wet and having my feet covered in grass cuttings - I'm not going to stress out about it. They are having fun, and they can strip down and dry off before coming into the house.

This afternoon, the girls were watering their plants, and I told them specifically not to get wet, because it was almost dinnertime. A few moments later I heard a shriek, and Fifi was standing on the porch with a wet streak across her hair and shirt. I almost shouted at Lolly for getting her wet after me telling them not to when I observed that Lolly was thoroughly drenched. I looked back at Fifi.

'Lolly sprayed me!' she shouted indignantly.

'Well it's pretty obvious you sprayed her first, so no complaining!' I returned. I nearly added an admonishment for disobeying me, but I caught a glimpse of the delight in Lolly's face over being totally soaked, and the relief in Fifi's that I didn't seem all that mad, and I just let it go. The kids played in the hose until the table was set and the dinner was out of the oven. Then I made them strip down and handed them towels. But not before I snapped this photo. 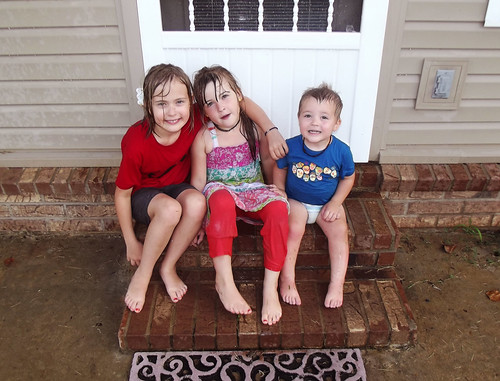 While they ran to their room to put on dry pajamas, I dumped the sopping clothes in the washing machine. No harm done. We ate our dinner happily, and I figured the water play was as good as having had their evening bath.

...But they're going to learn how to clean up after themselves too!
Posted by Lori Arnold at 10:03 PM
Email ThisBlogThis!Share to TwitterShare to FacebookShare to Pinterest
Labels: childhood, children, family, kids, life, memories, motherhood, motivated moms, parenting