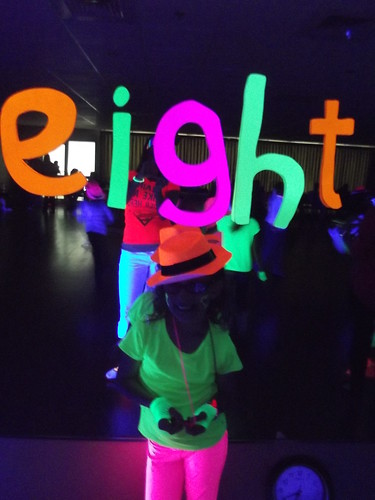 
... I could not imagine ending up with this.


When Fifi was little, she was pink and princessy, girly and giggly, cheeky and chubby. Now, here she is, an eight year old who reads 500 page books, loves science and history, and wants to be an American ambassador to Japan before pursuing the White House as President of the United States. An eight year old who squealed with delight over receiving a book about Martin Luther King, Jr for her birthday. An eight year old who has the confidence to dance her own routines at a Zumba party.


An eight year old whose heart is so selfless that she told people they didn't need to bring a present to her party, she just wanted them to be there. An eight year old who is already smarter than I am. I am so proud of the young woman my daughter is becoming. She is amazing!

Some days, I forget to see who this girl is inside. As she approaches adolescence more quickly than I'd like, I see those sparks of teenage attitude flicker up when she fights with her sister or bosses her around or smarts off to me with hands on hips and eyes rolled. I get weary and fed up with the near-teen behavior and sometimes lose sight of who the real person is inside. The girl who will do anything for anyone. The girl who loves and protects her brother and sister ferociously. The girl who thinks deeper thoughts than any child I've ever met, and who is not afraid to come to different conclusions and hold differing beliefs to both her friends and her parents, as long as she is true to herself. This girl is selfless, intelligent, mature, confident, independent and driven. It's easy to forget all of that when she is acting like, well, a child. Because when a child is as mature of Fi is, we adults sometimes forget at times to remember that she is, actually, still a kid. And kids are allowed to be imperfect sometimes! I'm glad that amongst all the books, diaries, and science kits she received for her birthday she also received a doll. It's good to be a kid while you can, baby. I know the path to the Presidency is hard and requires a lot of serious study, but playing with dolls is a wonderful pastime!

Today at her Zumba Glow Party, as I watched how well she gets along with her peers, how thoughtful she was of every child who walked through the door, making sure they all had glow bracelets and their glow party favor, and how genuinely grateful and gracious she was to each person who brought her a gift, I remembered very well just what an amazing kid my daughter is. What a shining light! (How appropriate that you had a Glow party!)

Happy birthday, Fifi-bear. Each day you grow more and more beautiful, inside and out. You make your mum and dad so incredibly proud. We are stunned by the fact that though we made you, you are your own unique person who impresses and astonishes us constantly with your awesomeness. Though we'd like to take a little bit of credit for how awesome you are, we know that really, it's all you, babe. Your awesomeness is all you.