End of an Era

Today was the first day I ventured out of the house with Jaguar in "big boy" pants.

(He did great for the first part of the day at the gym, not so great later. Eek. Cringe.)

Regardless, the end is in sight. He's two and a half, so yes, he could still be wearing diapers for a while yet, but I have a feeling we're getting close to actually being totally potty trained. He's almost there. It's the end of an era.

Which got me thinking... Jaguar is my End of Eras baby.

A few months ago, I bought him a new stroller. The one we'd brought over with us from Scotland had finally taken it's last stroll. As I paid the cashier more money than I really wanted to pay, it occurred to me: This is the last time I'll ever buy a stroller. At least until I'm a grandma.

And about six months ago, just a few weeks after his second birthday, I breastfed him for the last time. It was unceremonious. I didn't realize it was the last time. I can't even remember when the last time was, it was so unceremonious. We had just finished. It was over. It wasn't until at least a month later when I realized: I'm done breastfeeding. I'll never breastfeed again. Not even when I'm a grandma.

I packed away his cloth diapers a few months ago. He's too big for them now. I don't have the heart to get rid of them just yet, but no one in this family will ever wear them again. The end of my cloth diaper era.

He's in his own bed now. No more cribs.

He drinks out of cups now. No more sippys.

Happy as No More Diapers makes me, it's also the end of yet another babyhood era in our family. The McFarlane babyhoods are nearly complete. Never again (lord willing and the creek don't rise) will there be another baby in this family. No more breastfeeding. No more baby-led weaning. No more baby-wearing in slings. No more bed-sharing. No more cribs, sippy cups, bibs, muslins. No more diapers.

It's a relief, but it's also kind of sad. We're soon to be a family of kids. Of school-age kids. I mean, in six months, Jaguar will be old enough for pre-school. PRE-SCHOOL. In just over two years, we'll have a child in middle school. MIDDLE SCHOOL.

I don't care if it's a cliche, it's totally freaking true - Kids grow up so fast!

I never shed a tear over Jaguar's last breast feed, the way I did over Lolly's and especially Fifi's. I'm not feeling weepy now either over the end of this baby era. I know I'm truly ready now to say goodbye to our family's babyhoods. But it's sobering. We have only this one life to live and one chance to live it, and, well, a really special part of my life is just about over, never to be repeated. I'll soon be the mother of school children, then teenagers, then college students, leaving me an Empty Nester. And Scott and I will be that old couple who look at each other in our empty house and wonder, "What the heck happens now?" And we'll plan to travel the world, except one of the kids will announce they are having a baby, and we'll suddenly be grandparents instead of globtrotters, and we'll be cool grandparents until our bones get too achy and we can't see through our cataracts and then, at some point, we'll just die.

End of an era indeed. 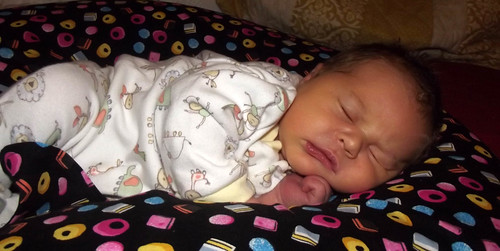