Fifi and the Great Hospital Adventure 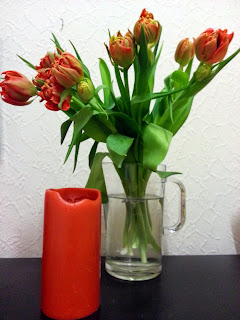 I guess while I've got a cake in the oven is a good time to share what I alluded to in my previous post about Fifi.

On Sunday, she woke up complaining of lower abdomen pains. We didn't know what was wrong with her, so we gave her one of those microwavable cuddly toys to keep pressed against her tummy, and she spent the day in her pajamas sort of lying around, with a mild fever. The following morning (Monday), she came into our bedroom at 5.30am nearly in tears because she hurt so badly. She still had a slight fever. I warmed up her cuddly sheep again and set her up on the couch. I was beginning to toy with the idea of calling a doctor. Her pain appeared to be much more severe than it had been the day before. I gave her some children's Tylenol for the pain. Then she said, "It hurts over here now" and pointed to her lower right side.

The doctors' office opens at 8am, so at 8am on the dot, I called to make an appointment. After waiting on hold for fifteen minutes, I finally got through to the receptionist. Our family doctor didn't have any openings until later that afternoon, but the receptionist agreed with me that this needed to be seen to immediately and asked if she could schedule me with a different doctor at 10am. Of course!

I got the kids ready (Lolly was at school by now), and we were at the doctors' office ten minutes early and were seen quickly. The doctor wanted to get some tests run on Fifi to rule out appendicitis right away, so they did a urinalysis (to rule out UTI), a blood test and an x-ray. Fifi wasn't expecting the blood test - even though I'd mentioned before we left the house that they might need to do this - and she freaked out. She was still very good and still for the lab assistant but was in tears, on the verge of hysterical.

By this time, the Tylenol was wearing off, and her pain was returning, even worse now, as we waited for the test results. Even still, with her pain, I was beginning to think I really had been over-reacting and she was probably fine. She hadn't said anything about her right side again, and I began wondering if it was just painful "wind" or constipation. Then the doctor returned.

She told us Fifi had a higher than normal white blood count - another indicator of appendicitis - and she was scheduling us a CT scan at the hospital right away.

I still had Baby Jaguar with us at this point, but things were starting to look like a back-up plan might be needed. As I drove the kids the hospital, I spoke on the phone to various people - Scott, my dad, my mom, my step-dad, my step-mom, my friend Mike, the school - trying to arrange everything. Lolly would ride the bus to Mike's house. Dad would come to the hospital to take Jaguar home with him in an hour. In the meantime, Scott would come straight to the hospital to help with Jaguar until Dad got there. My step-dad, who works in the hospital, would meet me at the front door to park my car so Fi wouldn't have to walk, and then he'd sit with Jaguar while I got Fifi admitted. It was kind of a whirlwind. All the while, Fifi was clutching her belly and intermittently whimpering.

By the time we got to the CT scan waiting room, Fi was sobbing with pain. It was heartbreaking to watch. I was mentally planning an overnight stay, how I'd break it to her that she might need her appendix out, who would keep Lolly and Jaguar overnight, how I'd need to get my shift at work covered for the following night. We were finally taken back to get her scan, when it was explained that she'd need to drink a large barium drink and then wait another hour before they could do the scan. Poor Fifi was distraught. We did our best to distract her, as did another mother waiting with her teenage daughter for the exact same thing (suspected appendicitis). Thank you, Judge Judy, for your televised entertainment!

After an hour, Fi and I went in to get her scan. I'd shown her a CT machine on my phone so she'd know what to expect. What she did not expect was getting an IV. Again, she freaked out. The whole experience was really upsetting for her, getting the IV, getting the contrast dye injected into her arm, the big machine, and then the long wait with the IV still in her arm. Oh and the whole not having eaten since 10am, since they needed her to fast just in case surgery was necessary. By this time - 4pm or so - she was famished. We waited for ages for a doctor to read her scan. (So did the teenage girl in the waiting room with us, for that matter.) Around 5pm, the doctor had finally come around to look at the scans. The girl waiting with us was told she'd need her appendix out, and I was sure Fifi would see her again in a few hours after the same procedure. The doctor then asked for a second scan on Fi, since the first was not conclusive. The poor child had to go through another CT scan. The tech came out fairly soon after that and told us we could go home. It wasn't appendicitis.

We never saw a doctor, so we had to ask the tech what was causing her pain and the fever and the high white blood cell count? He reminded us he couldn't say for sure, since he isn't the doctor, but that he was willing to bet it was some Long-Medical-Terminitis that mimics the symptoms of appendicitis, but the scan was clear: her appendix was fine.

We were relieved, naturally, that it wasn't her appendix and she wouldn't need surgery. However, we were a little unhappy with the lack of answers. The next day the GP who'd seen us originally called to tell us she thinks it was all just constipation and to give her Miralax. I asked why she would have a fever and high WBC if it was just constipation, and the doctor said that just happens sometimes. Scott and I didn't really buy that, but what else was there to do?

I kept Fi home from school on Tuesday to let her recover from her stressful day previously. By the end of the day, she seemed to be feeling better, had stopped clutching her belly constantly, had no fever, and the color had returned to her face. Whatever she had that was causing her pain seemed to have subsided. We just wish we could've gotten some better answers from the medical staff!
Posted by Lori Arnold at 12:23 AM
Email ThisBlogThis!Share to TwitterShare to FacebookShare to Pinterest
Labels: health, kids, life, updates