All Over a Cup of Gingerbread Coffee

The kids are off school for two weeks, and today has been a nice start to their vacation. The girlies are outside right now (in the rain) playing with the new neighbor kid, while the boy naps, and I'm sitting in a dark, quiet room drinking a cup of coffee with gingerbread creamer...

I got as far as the word "creamer" when Jaguar woke up from his nap.

Okay, start over. I'm sitting in a well-lit room, drinking a cup of coffee with Harry and His Bucket of Dinosaurs on the TV. I'm still feeling good.

We started this morning with everyone sleeping in until 7.30. Well, everyone except Fi, who played quietly her computer all morning while everyone else slept. My kids never sleep in so late, so this was pretty amazing. The girls received $5 each from Banoffee Pie this morning, so once we'd all eaten breakfast and lazily gotten dressed, I took the kids to the Dollar Tree to buy their gifts for each other. I tried to convince the girls to keep their presents for each other a surprise, but they ended up collaborating together on all the gifts, including the ones for each other. It was really cute seeing them work together, with their two little shopping baskets, picking things up, considering them, and putting them back on the shelf. After about thirty minutes (maybe longer), they had each chosen their four gifts (making sure I did not look to see what they got me) and they went through the checkout line together with their fivers. They had a dollar left over, so of course that had to be spent; they got a bag of Skittles to share amongst themselves in the backseat on the way home. (That whole "no food in my new car" thing kind of went down the drain with that one, I guess.)

They came home and wrapped up their gifts together - again, banishing me from the room. (I still sneaked a photo.) Since then, the three have been playing wonderfully together. It's been such a lovely, rainy day. They were all so behaved, I even finished my Christmas craft project that I'd been putting off finishing. I can't show a picture of that yet (can't ruin the surprise!), but hopefully I'll remember after Christmas, because I love how everything turned out! 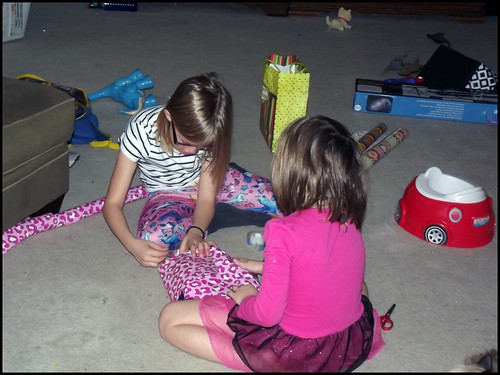 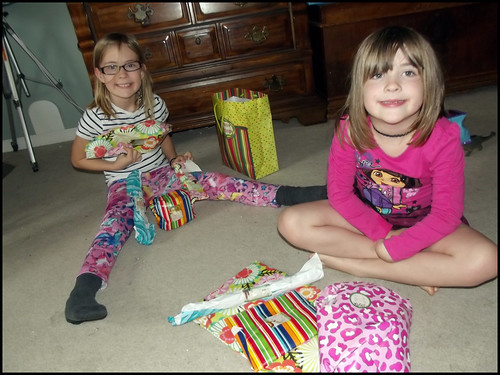 Yesterday was Christmas with my dad, stepmom Denise, brother, sisters-in-law and nieces. ("Sisters-in-law" makes my brother sound like a polygamist. The ladies are married to different brothers. The other brother is just currently on deployment.) We ate a delicious meal around a sweetly decorated table and opened presents. Fifi got a telescope and could not have been more exuberant. Lolly got an "American Girl" doll (aka an Our Generation Target knockoff) and has been taking her everywhere she goes. Jaguar got a Spiderman action figure that he has been HI-YA!ing with ever since and a metal POW! sign for his soon-to-be-redecorated-with-Spiderman bedroom. 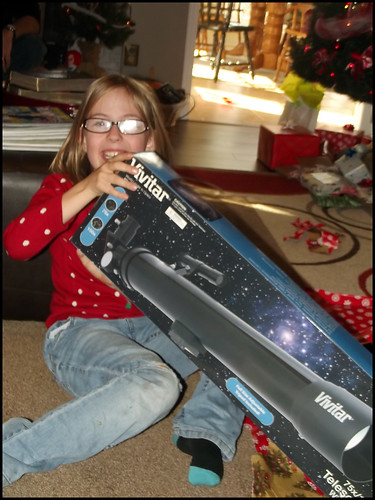 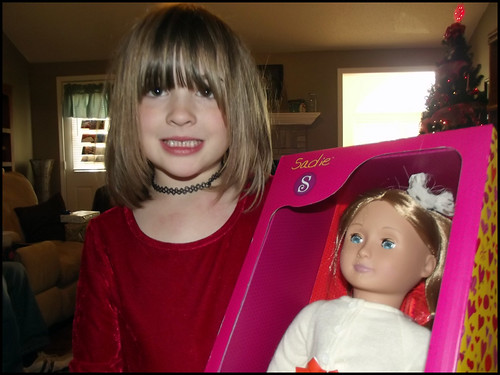 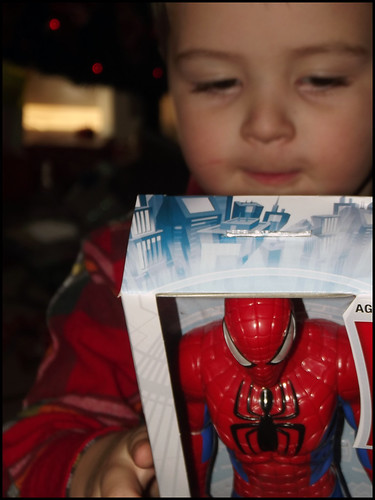 All three were seriously over the moon with their new gifts. All of the other kids and the adults seemed pretty pleased with their gifts too. Scott got a shirt and two travel mugs that plug into the car's cigarette lighter to keep warm. Pretty ideal for his tea on the way to work! I got a yellow table runner that I'd had my eye on for ages (thanks, Denise!) and this.... 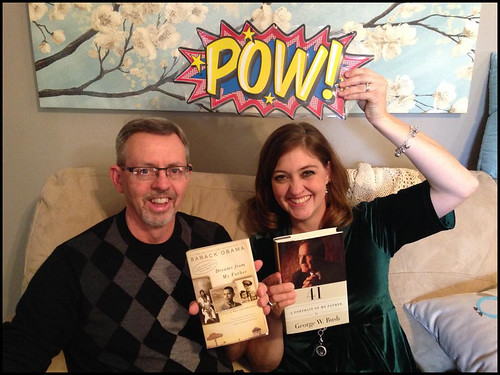 My dad bought me George W. Bush's book about his father, 41. I, on the other hand, had bought my dad Barack Obama's book about his childhood, Dreams From My Father. My dad is a staunch Republican and I'm very left wing. (I call myself Democrat, but I'm much further left than that!) So much hilarity ensued.

Day 17
Banoffee Pie went through Ken's closet and borrowed a pair of shorts for some sunbathing. 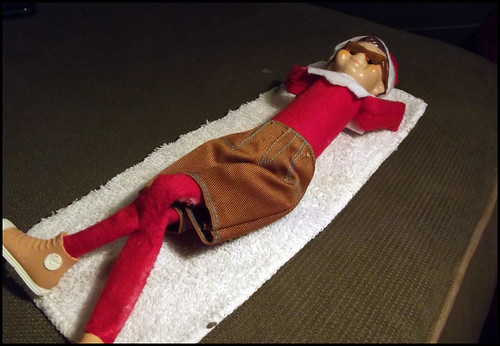 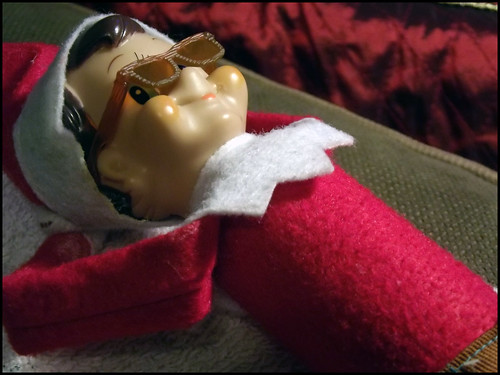 Day 18
The morning of Lolly's birthday, BP sort of jumped the gun and started opening one of her gifts... 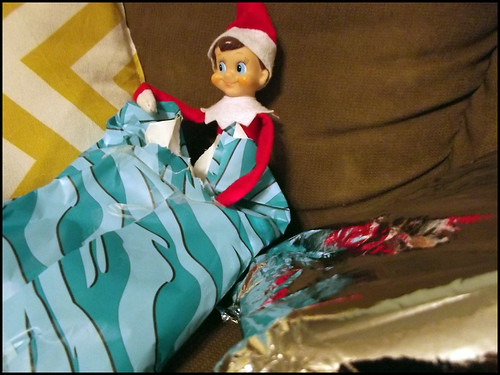 
Of course he poops chocolate chips. Which the kids fought over to eat. Gross. 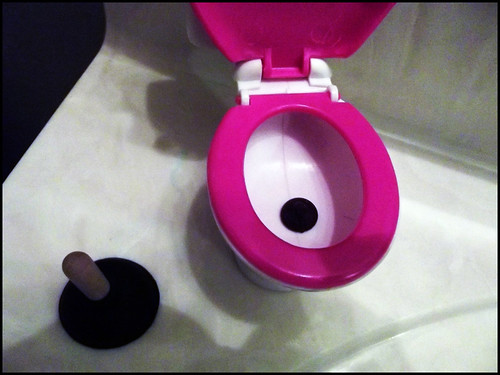 Day 20
The kids spent the night with their grandparents, and I was at work by the time they came home. Scott tells me they weren't impressed with Banoffee's lack of creativity on this one. 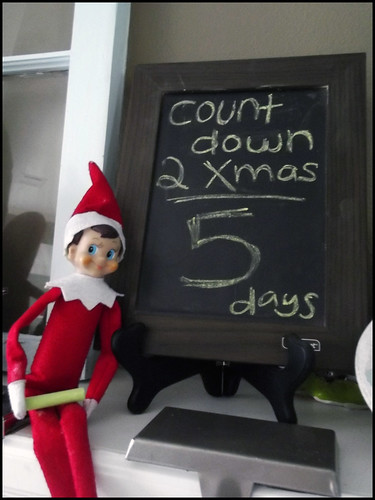 Day 21
After working all afternoon and then a dinner and karaoke night out with a friend, arriving home past midnight, this is all "Banoffee" could think of. 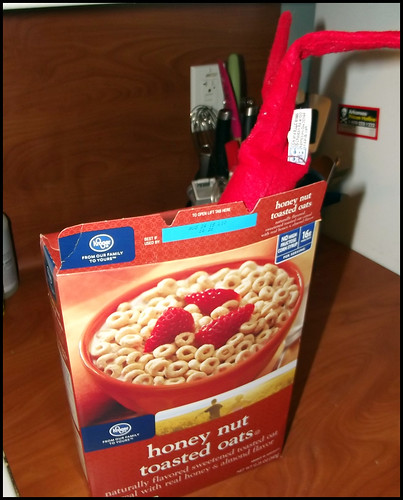 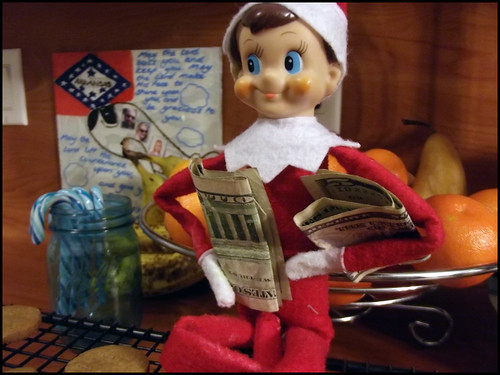 Only three more Elf nights left... and I still have ideas left!