Ask An Atheist: Where do your morals come from?

With "Ask An Atheist" day coming up (the third Thursday in April, according to the Secular Student Alliance), I'm offering to give an answer to any questions anyone might have this week about atheists. This question came from D. on Facebook:

To answer this question, I must go very far back in time - approximately 40,000 - 100,000 years ago or so. The following may be hard to swallow for anyone who does not understand or accept human evolution. But if you want to know where my basis for morality comes from, you must read on.

When humans first started doing humanish things, like making tools and drawing cave paintings, we were not much different than the other animals living around us. We were, around this time, give or take a few thousand years, learning to live together in tribes and trying to create meaning and reason out of what we were experiencing and observing. We know this, because there is evidence that we were burying our dead in ceremonies. The pressure to survive was great, but our brains were developing the ability to think past survival instincts. Like many other developed mammals, we were developing characteristics that we still see today in nature - one of which was altruism.

We were beginning to understand that if we care for our young, they will grow up to be useful to our group. We were developing a tendency to pair-bond (monogamous mating). We were discovering that when you treat members of your tribe well, they won't try to kill you. We were beginning to understand that in order to survive, we must work as a team, hunting and gathering for food, and protecting each other from other bands of humans. And as survival became the tiniest bit more certain, and the constant fight to stay alive would every once in a while give way to moments of leisure, we were then able to wonder and think and notice that we felt something which would one day would be called "empathy".

While altruism and even empathy can be seen in other animals, human development of these traits was exceptional.  Through caring for our young, banding together with our tribes, and protecting our families against outside threats, relationships developed, and learning how to be better at relationships actually caused our brains to develop even further. We developed the ability to feel someone else's pain - whether it be sympathy for the cry of our offspring or the pleasure of bonding with another human or the sadness of a death within the tribe. We had no issue killing other people from other tribes, who had no relevance to us, but within our own groups, we were learning to do good to one another.

So where does the basis of our morality come from? It comes from the very empathy and altruism that brought our species alive and well into recordable history. It has become ingrained in us, it is part of our fabric, maybe even our DNA.

*Psst. If you believe humans were created by the God of the Bible, rather than evolved, you can start here, because the Bible starts here.

As our brains further developed and we began forming larger societies, we began making rules. These rules kept us alive, kept us from killing each other.  A side-effect of rule-making was increased safety and leisure. With leisure comes thinking and wondering.  We began to wonder what we are. We began to wonder why we are here.  Societies developed into cultures, and cultures developed religions.  Some societies looked at the sun, which gave both life-saving warmth and life-taking heat, which caused food to grow or could cause it to die, and those people believed the sun was the reason we are here, and they worshiped it. Other societies found other natural phenomena to be the answer for why we are here. And then some societies began thinking even more "out of the box". Perhaps there is an invisible force that put us here, and we should worship it. They called it "God".

We'd already learned that rules keep us safe, so it easily followed that those rules were actually God's rules. And if God's rules keep us safe, God must want us to be safe. We had learned that we keep our offspring and fellow tribesmen safe, because we care about them - maybe even love them - so perhaps God keeps us safe with rules because he loves us too. And so forth and so on. As we evaluated our own experiences, we personified the idea of a person-like God.

At this point, we have a basic code of morality, which consisted of basics like "don't kill people" - because killing people destroyed our chances of survival. As early as our written record can show, we had other laws and rules of morality such as "do not steal" - because stealing seemed to have bad side-effects for our society. (It often led back to that whole trying-not-to-get-killed thing.)  But we did other things that later generations would find highly immoral. We stoned people for doing bad things. We cut off people's hands for stealing. We raped and pillaged other societies in order to have their land and belongings. Because "do not steal" only really mattered within the tribe. We had no problem stealing from other tribes, because their survival meant nothing to us. So while we had a basic underlying basis of "morality", the specifics of what was considered moral was very different from what we have today. The specifics would go on to change again and again and again from generation to generation.

So, while at first we were happy mutilating, punishing, and killing people for various reasons,we continued to progress and started rethinking some of our previous behaviors. We made new laws about not raping and pillaging. We began making peace treaties with other tribes, because it actually turned out to be advantageous for both parties to do so. But if a tribe wasn't worth anything to us, we still did horrible things to them. We even wrote these things into laws. (For instance, if a tribe did not believe in the same god as you, it was okay to kill every man, woman, and child in that tribe and take all of their things.) We considered ourselves living morally.

I'm going to fast forward now out of the ancient era and into the 1700-1800s. It's easier to think of morality in real terms when we bring it into our own recent history. During this time period, we believed it was perfectly fine to steal Africans from their land and force them to work for us. We beat them, raped them, mutilated them, starved them, traded them, worked them literally to death, and felt no remorse for it. It wasn't "immoral" to us at that point. And our religions didn't stop us - in fact, our religions saw no problem with ownership of other human beings, as long as there were one or two caveats, which were conveniently ignored.  We thought ourselves quite moral and God-fearing even as we tore the flesh off other human beings.

We, however, continued to progress (slowly) and eventually, slavery was considered immoral, and we stopped owning people - at least in a literal, lawful sense. But we still refused to give those Africans we'd stolen from their homes in the first place an equal place in our society, because it wasn't advantageous to do so. Their lives were still threatened by us every single day, but we weren't concerned, because we had done the moral thing by abolishing slavery. We considered ourselves very moral people at that time.

Fast forward to today. What was considered moral only a few decades ago is now considered barbaric and completely unacceptable for an enlightened society. A few decades ago, we lynched black people. A few decades ago, we chemically castrated homosexuals. Today those practices are utterly deplorable. However, many currently still think that interracial marriages or same-sex marriages are immoral, and have no place in a "moral" society like ours.  Give us only a few more decades, though and stopping people from marrying for either of these reasons will seem as deplorable as Jim Crow seems to us now.

The bottom line is this: Morality simply is not consistent. Morality is relative. It just is. There are moral laws that we have been abiding by for as long as we have human record - do not kill, do not steal, do not lie - because they have helped ensure our survival and a peaceful and just society. But the nuances are forever changing. Whether you believe the world is billions of years old or only thousands, there is still more than enough evidence in human history to prove that moral laws are constantly changing. Even evangelical Christians today will admit that many of the Biblical laws are obsolete (mixed fabrics, anyone? Tattoos? Marrying outside your tribe? Long hair for women?).  The Ten Commandments itself is largely made not of actual moral laws but religious ones - do not serve false gods, do not put other gods before God, keep the Sabbath.  These are not universal moral codes, like do not murder and do not steal; they do not constitute what is universally agreed upon as morality. Let us not forget that all ancient societies had moral codes; Judaism was not unique in that. The Assyrians, the Hittites, the Greeks, the Egyptians, all had laws dictating what was moral and good. Even societies that did not worship gods had moral codes.

To sum up, God is not the reason we have morals. If anything, morals are the reason we have God. Our morals, as human beings, come from thousands and thousands of years worth of experience, empathy-building, and rule-abiding. Why do I not go around doing terrible things if I have no god to stop me? Because I have empathy and an understanding of cause-and-effect. I do not want to hurt other people. I do not want to hurt myself. And furthermore, as a 21st century human living in the developed world, I am so safe and so unconcerned with my personal survival that I get to spend copious amounts of time thinking and wondering and imagining what a world without rules and empathy would look like, and I do not want any part of a world like that.

I do not need a god-figure to scare me out of doing evil. I have figured out, thanks to the billions of humans before me, that doing good is far better for me, my loved ones, and my society than doing harm. The specifics of my morals, however, may always change - and I certainly hope they do, for the better. 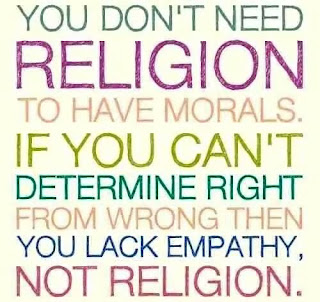