If you could choose one word to sum up your life, what would it be? 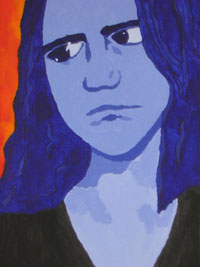 A few weeks ago I attended a Women In Networking lunch where author Erin Wood spoke of her book Scars. She first shared with us her varied background, which included having been a high-flying lawyer for many years. The WIN coordinator asked her to sum up her background in one word, and I wish I could remember what she answered (because it was a great answer), but the reason I cannot is because ever since that moment, that question has been churning around in my brain. If I could sum up my life in one word, what would it be?

I feel I too have had quite a varied background. I have worked in a fundraising department of a university, and as a newsletter and magazine writer/editor in a high school. I've been a self-employed baby sign language teacher and a self-employed childminder. I co-founded a breastfeeding charity and volunteered as a breastfeeding peer supporter. I used to speak a lot in church ("five minute spots" we called them) where I shared my faith, and then years later I ended up writing a book about my journey away from faith. Now I work for a non-profit in Communications and am getting more involved with a charity that supports homeless LGBT young people. It all seems rather eclectic, but I feel there is one theme that runs through most of what I do.

Voices. Being one, listening to them.

I have always felt the need to speak up when others cannot, to lend a voice to those still trying to find the words.  In a very literal sense, I did this through teaching babies to sign to their carers, giving them the chance to communicate before they were able to speak. I felt a such a thrill every time a baby did his or her first sign. I remember with pride the first time my daughter signed "cat", indicating she wanted to pet the neighbor's tabby on the way to the car. (Otherwise, I'd have thought she was squirming out of my arms just to be obstinate.) Every time a baby signed "milk" or "food", or even better, something specific like "dog" or "bath", the power and joy of communication was being fostered in that tiny human being.

I was not always so good at listening to voices until I became a breastfeeding supporter. During our training, we learned to just listen. Sometimes all someone needs is a chance for their own voice to be heard. My voice cannot always speak for yours. As a breastfeeding supporter I spent a lot of time just listening, asking questions that allowed the other person to find the words that would eventually empower them. Only after listening could we then become good advocates. As breastfeeding advocates, my peers and I learned how to speak up for breastfeeding mums in a wider space - through interviews, press releases, campaigns, newsletters, and creating support groups.  We  aimed to bring greater public awareness and education to our community regarding the rights of breastfeeding mothers and babies and the health benefits breastfeeding provides. Our goal was to make our community a more acceptable place for mothers to freely feed their babies. Many breastfeeding mums (first time mums especially) find breastfeeding in public daunting; we wanted to build their confidence by surrounding them with support and changing local attitudes. We listened to their voices, and then we spoke on their behalf.

When I came out as an atheist, I did so publicly, to be a voice for those who were secretly also questioning their faith or still needing to keep their non-belief under wraps. I know many Christians (and believers from other religions) question their beliefs but are terrified of the consequences should they reject it. Having been a devout Christian myself my whole life, I had experienced that terror myself when I began to doubt.  I wanted to assure those people that someone else has been in their shoes and knows how it feels.  Writing a deeply personal memoir about my experiences cost me a lot personally, but it allowed me to share my words. lend my voice, in a way that could help others find theirs. Now, every private message or email I get that thanks me for putting myself out there makes my vulnerability worth it. Just knowing that I've made someone else feel not so alone is all the reward I need. Just knowing that I've been able to help someone put their own thoughts and feelings into words is indescribably valuable.

I also wanted to bridge a gap between believers and non-believers that is so often too wide for anyone to cross. I wanted to give a voice to non-believers, but I also wanted to be a voice for believers too. Believers are often mocked for their "indoctrination"; I wanted to show that many times, religious people are not actually mindless, brainwashed zombies but intelligent people who have thoroughly thought through their beliefs. (I was always a critical thinker myself as a Christian, though my questions eventually led me to a different conclusion.)

In every aspect of my life, I've realized, there has an element of being a voice for someone who needs one, or sometimes not a voice but an ear to listen to their voices. Voices matter. Your voice matters, everyone's matters. If my eulogy reads, "She listened when I needed to talk, and she spoke for me when I couldn't", that would be legacy enough for me.

If you had to describe your life in one word or a few words, what would it be?
Posted by Lori Arnold at 11:05 PM
Email ThisBlogThis!Share to TwitterShare to FacebookShare to Pinterest
Labels: atheism, breastfeeding, life