I've been putting off posting about this, because I don't know what I can say to do it justice. But it's so heavily on my mind, I can't just not say something about it at all.


A week ago yesterday, a terrible storm crossed Arkansas culminating in tornadoes that touched down in several surrounding areas and leveled a neighboring town (as well as a few others). The same storm system also created tornadoes in a couple of the surrounding states.

It's been a long time since I've lived through a tornado warning. In high school, I remember a tornado warning being issued during a rehearsal for our school's spring musical. We all had to line up along a wall within the auditorium with textbooks over our heads. Our parents weren't allowed to come pick us up until after the tornado passed because the school was on lockdown. For the parents, it must've been terrifying. For us teenagers, it was just a thrill. Nothing bad happened nearby that I remember.

In college, I saw a tornado for the first and only time. I was staying at my then boyfriend's house in Searcy, AR, and the whole family plus me was crouching in the hallway. His dad kept going outside to look. I worked up the courage to go look too and in the far distance I saw the funnel cloud reaching from the distant black sky to the horizon. It was terrifying and breath-taking.

But last week was the first time I ever experienced the actual reality of a tornado.

I woke up early that morning to a thunderstorm. The night before, we'd left our canopy out in the back yard, so I quickly woke Scott and said we needed to get it down before it filled with rain. In our pajamas, we ran outside and clumsily fumbled with metal poles while lightning forked through the sky and thunder roared. It was a little frightening.

The forecast predicted tornadoes. I'm not a panicker in these kinds of situations, so I wasn't really all that unhinged. A bit freaked out, yes, but that was it. We spent the day inside, as thunderstorms came and went. It wasn't until late afternoon that I began to sense the seriousness of the coming storm.

An enormous black cloud was approaching outside. I tried to film it with my camera, but my camera's settings kept trying to compensate for the blackness by increasing its light balance. (Apologies for the lack of correct photography lingo.) It was mostly silent outside, and a little greenish, two indicators that this was tornado weather. Never had I seen a cloud like it. It covered the whole sky from my view outside my back door. On one edge, Scott noticed clouds swirling down and back up into the greater cloud. He called me to come look. Little wispy clouds were being sucked up into the black cloud in circular motion. I'd never seen anything like it.


I started watching the storm chasers online. We don't have access to TV stations, so I couldn't watch the news. Facebook too was popping up with lots of weather updates from friends, including some 'how to stay safe in a tornado' posts. I'd never considered half the things people were suggesting - food for 72 hours, bike helmets, shoes in case you had to walk through rubble. I felt a little paranoid doing it, but I went ahead and cleared out Jaguar's closet, which is the innermost room in our home, with no outside-adjoining walls. I gathered together our personal documents, some water, our shoes and the kids' bike helmets. We put the kids to bed, thinking we'd scoop them up and bring them into the closet lined with pillows should the sirens go off.

I watched the coverage by professional storm chasers until midnight, when the storms had officially passed out of our area. I knew the storms had severely hit Vilonia, a town 18 miles north of us, and Mayflower and Maumelle, about 20 miles west. But I didn't know the full extent of it until the next morning.

Vilonia (and Mayflower) had been destroyed. Over a hundred people had been injured and at that point at least 5 dead. The total rose to 12 (then 15) as the day progressed. Around 40 people were still unaccounted for. Emergency staff were the only ones allowed in the disaster areas and no lay volunteers were being allowed to help at that time. 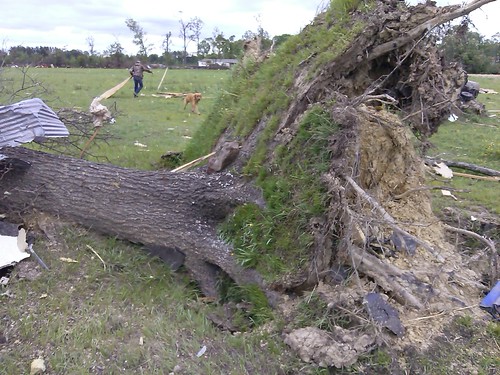 I don't know what it was about this particular storm that hit me so hard. Was it the proximity? Was it seeing the start of myself, knowing that very cloud and those swirling cycles were the beginning of the tornado that devastated a town so close to us, that could have hit us if we'd just been a little less fortunate?

I still don't know what made it touch me so deeply, but it did. My neighbor and friend is friends with a few of the families who lost everything, and one who lost the family's father/husband. Another friend of mine lost a co-worker. Another friend of a friend lost her two young sons. The stories kept coming in, and they all were far too close to me in some way or another to ignore.

What does one do when they hear these things? What can one do?

All over Facebook people were saying to pray for Arkansas. In the face of such tangible devastation and need, not even to mention grief, the concept of just praying infuriated me. We were already being told of the many, many things that would be needed - supplies, clothes, first aid kits, money. I understood that people believed praying would do something (comfort the victims, I guess), but there were so many things we could actually DO besides pray.

This perhaps is what hit me the hardest.

For all my life, with a few exceptions, when horrible things happened, my response had always been 'pray'. And after praying, I felt I'd left it all in God's hands and he could go on to deal with it for me. After all, what was I able to do? But now, there I was, realizing that prayer is just a practice that helps the person praying feel better, makes them feel like they've done something useful, in times when they are otherwise helpless. I understood the urge to pray - I felt helpless too - but I also realized that praying was the lazy way out. I needed to DO something that actually might make a difference, however small.

It almost felt like I had a life time of doing nothing to make up for.

There wasn't a lot I could actually do; I knew that. I donated what I could and volunteered one day in the tornado-ruined neighborhood when I had childcare. It wasn't much at all, and I still felt the huge weight of how much there was needing done and how little I could do. I still feel that weight, and I still feel that helplessness. We might be able to get on with our lives a week later, but those whose homes were leveled to the ground and those who lost loved ones will never be able to go on exactly as they had before. For the rest of their lives, those who lost their homes and belongings will remember irreplaceable things they lost, and those who lost members of their families will never forget the agony and pain that will remain with them in waves of rawness their entire lives. I wish there were more I could do to reach those needs. Instead, all I can do is just meet practical needs where I possibly can and hope it means something to someone.

I understand through all of this the desire to pray. And having been a Christian for my whole life, I understand the theology behind praying. But as a non-believer now, I just see the irrationality of it and how futile it is. It makes us feel better to pray, it really does, but that's all it does. I've spent plenty of time in prayer - not enough time in action. I just can't sit back and do nothing anymore.

I know that one day, probably soon, I'll realize there is nothing more I can do. I know that I'll live with 'survivor guilt' for being able to move on with my life while knowing many of them haven't even begun to imagine what moving on would even look like. I know that I'll be better prepared for the next storm, with fully equipped 72 hour bags, and I won't wait to get the kids in our designated shelter, now that I recognize how quickly tornadoes can hit - too fast to scoop kids up out of bed and get their shoes on them and get them into a closet. I've learned a lot from this storm about the realities of tornadoes. But I've also learned a lot about the reality of myself. I've spent a lot of time doing nothing when I could have been searching for ways to do at least a little tiny something.