If Babies Could Blog About Playdates

Today a friend and her two year old son came over for a play date at my house. From the grownups point of view, there isn't really much to say about it; we had a good chat in between child interruptings and planned to get our families together for a BBQ soon. But from the kids' point of view, I imagine the play date was very different.

So, if Jaguar could blog, he'd probably say something along the lines of this: 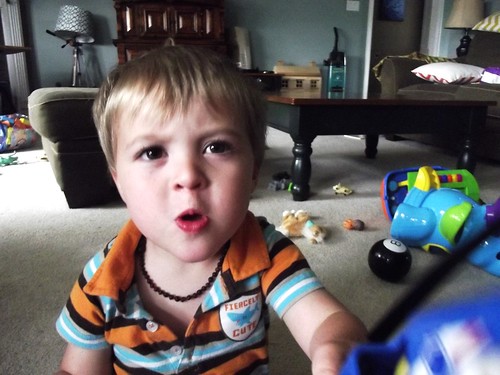 Me and my big sissy were just minding our own business, her watching bright colors talking on the TV and me pushing my green dump truck, when the door opened and in entered a big person and a little person.

The little person caught my interest. He was my size roughly. At first, he didn't seem very interesting; he just sat on the big person's (a mummy of some sort perhaps?) lap. When he got up, he was just trying to look out the window, not even noticing Mummy had brought out ALL MY TOYS! Mummy NEVER brings out ALL MY TOYS at once, so this was a big deal. Since the person my size - they kept calling him something weird which made no sense and I couldn't pronounce anyway, so I just called him 'Babeh' because I can say that and it makes more sense - wasn't even paying attention to the awesomeness that is ALL MY TOYS, I tried to gently encourage him to come play by dragging him by the neck. For some reason (weird babeh) he cried when I was just trying to show him ALL MY TOYS.

So a few minutes later, he finally came over to the toys that I'd poured all over the floor, so we could both see better, and guess what Babeh did - he started playing with my NOAH'S ARK! I mean, not my NOAH'S ARK!! Seriously, Babeh, that's MY Noah's Ark. So I gently tried to take it back and Babeh cried again!

But get this, ya'll. Mummy took MY Noah's Ark back off of me and gave it back to Babeh!!! Then she gave me a dumb old airplane instead, which was like, NO. But then I realized the airplane made noises, so it was cool. Noah's Ark's batteries are dying anyway and the noises don't work.

So me and Babeh played with those toys for a little bit. I liked having Babeh there. We're both short, and we both like to play with toys, and get this - he knew what a potty was! Just like me! And Babeh was so cool, he didn't even try to use my potty, he just looked at it and used the Big Boy Potty in the bathroom, which was nice of him.

But just as things were getting good with Babeh, I noticed Babeh had MY TRUCK!!! Guys, that is MY truck!! So naturally, I once again gently tried to persuade him to give me back my truck by pushing him in the face, and Babeh responded by pulling my hair! I'm, like, you take MY truck out of the toy box and when I nicely push you to get it back you PULL MY HAIR? Me and Babeh were both crying now, and our mummies picked us up and gave us both into trouble. Not fair.

Babeh was a cool kid though, because he gave me the truck and I signed 'Thank You' back to him, and we were friends again. Mummy even gave him another one of my trucks (which I had to try hard to not get upset about), and me and Babeh rolled our trucks around on the table for awhile. Until Babeh tried to swap trucks with me, and then it all started all over again. He pushed me so I tried to bite him. Unfortunately Mummy pulled me away before I could really show him how I felt about him trying to swap trucks.

I calmed down though, and we started playing with blocks together. We were sharing SO GOOD, ya'll, and our mummies kept saying nice stuff like, "Good boys" and "Nice sharing" and that made me feel pretty awesome.

Then this one thing happened.

See, sometimes when Mummy opens up her mouth wide, I stick my finger in her mouth. It's kind of a thing we do, I guess you could say. So Babeh opened his mouth and I thought he was doing the thing too, so I stuck my finger in his mouth and want to know what he did? He bit me! He bit down on my finger! Mummy once again rushed over to intervene, and I was pretty distraught. Mummy kept saying stuff like "You shouldn't have put your finger in his mouth" like it was MY fault he bit me! Crazy. Mummies just DON'T GET IT.

Well, so we played a little while longer, and even though Babeh kept playing with my toys, which sometimes was okay but sometimes was totally NOT okay, we were having a good time. Until I wanted both of the trucks (they're MINE!) and Babeh started crying and Mummy tried to take one of the trucks off of me and I started crying and it was just really terrible what she was doing to me. I have to admit, I had a little bit of a breakdown, throwing myself on the floor kicking and screaming. It wasn't my best moment, but what would YOU do if your Mummy tried to take one of your trucks (that belong to YOU) away from you and give one to another person?

Well, mummies talk about these things I can't pronounce ("consequences" or some weird thing like that), and I guess that's what happened next because Babeh started pulling on his mummy and pointing at the door and saying "Go". So you know what happened next? Babeh left! He left!! My best friend, the best person in the WHOLE WIDE WORLD left!! I was devastated. Why did Babeh have to go? I loved Babeh!

Mummy said I was "tired" and I was like "I'm NOT tired, I just didn't want Babeh to leave (or play with my trucks)" but Mummy put me down for a nap anyway. I was SO NOT TIRED, but I ended up falling asleep right away anyway because my pillow felt SO GOOD to my head and it really had been a rather eventful morning.