Well it's only taken seven years, but I've finally started my kids' birthday banners I've been planning since Fifi turned one.

I had this idea after watching an episode of Gilmore Girls (ha) where Lorelai pulls out all these weird and wonderful objects representing all or Rory's birthdays - gigantic stuffed unicorns and the like. I thought it was an adorable idea to have memorabilia from every birthday, except I didn't want to have anything quite so big. So I decided I'd make a banner, and use patches and appliques to represent each birthday.

For each birthday until they are 18, I wanted to have a separate triangle. For younger birthdays, there would be a patch that would represent what the theme of their party that year was. As they get older, it could be an achievement from that year, or a hobby, or something reminding us what we did for that birthday.

Last year, for Jaguar's first birthday, I bought the first package of triangles (5 in a pack) and started Jaguar's. One patch was easy enough to start with. So his has been up in his room from the time we moved in to this house. 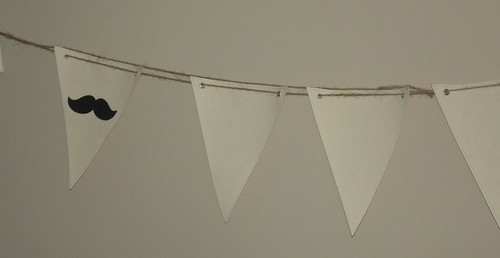 His first birthday was a "little man" party with a mustache theme. 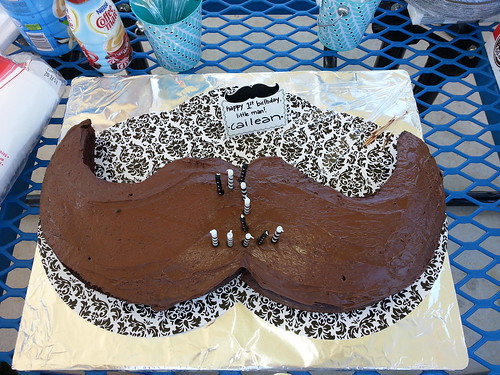 Six months later, it was Lolly's 5th birthday. Part of her present was getting her banner complete, with the exception of a few patches I had to order. It finally got put up about a month ago.

Lolly's birthdays have been the following themed parties:
1st - Rocking horse/Carousel party, where she got a rocking horse, a dress with a rocking horse on it and a Carousel cake and carousel-shaped cookies.
2nd - "Clicky Shoes" party, since she loved wearing my heels all around the house, which I apparently have no surviving images of. :(
3rd - Dora the Explorer Fifiesta - Catch the Stars party (which was a far cry from the well-thought-out Dora fiesta Fifi got years earlier)
4th - "Over the Rainbow" Wizard of Oz party, her last big bash before leaving Scotland
5th - Powerpuff Girls Superhero party 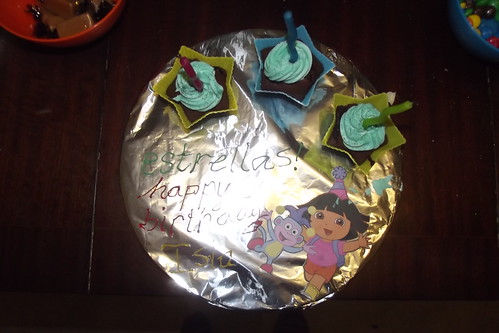 Last was Fifi, who now had seven years worth of patches to collect. I had the first four from her knitted banner, though, so all I needed was the final three and the triangles themselves. Fifinally, last week, I got them all ironed on and hung. Seven years after having the original idea!

Now that I am all caught up with parties, the only aim is to stay caught up. Jaguar's second birthday is coming up, and he's having a Carnival in the backyard. (However, if I hadn't already planned it all, he'd probably be having a Frozen party - or as Jaguar calls it, "Deep Deep Mo" (as in "Arandale's in deep deep deep deep snow") - since it's his FAVORITE movie.)

Hopefully these will be cherished as precious memories when they are older. I hope they'll want to keep these banners hung in their room even when they are teens - I know I'd have kept one up!
Posted by Lori Arnold at 10:39 AM
Email ThisBlogThis!Share to TwitterShare to FacebookShare to Pinterest
Labels: birthdays, childhood, children, family, friends, kids, memories, parties, traditions